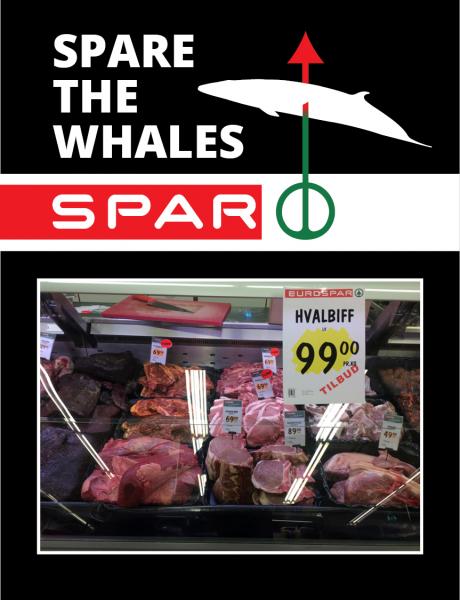 The coalition wrote to SPAR International in the Netherlands, on June 29, 2015, to raise its concerns and ask the company to ensure SPAR Norway desist from trading in whale products.

Meat products from protected minke whales killed in Norwegian waters are sold in a number of SPAR Norway and other stores owned by SPAR Norway’s parent company, NorgesGruppen. As highlighted in the brief, a variety of whale products are available for purchase at a number of the 276 SPAR and EuroSPAR stores in Norway.

“Whaling belongs in the history books and but for the belligerent activities of a handful of nations it would be,” said Clare Perry, EIA Oceans Campaign team leader. “SPAR shops are a familiar sight in communities around the world and as a company with an international profile it has a duty of responsibility to ensure its policies do not directly support a dying industry characterized by cruelty and exploitation of a protected species.”

Susan Millward, executive director of AWI, said, “For far too long, Norway has managed to get away with slaughtering whales with impunity—killing more than Iceland and Japan combined in 2014. Alarm bells should be ringing for SPAR, knowing that it is contributing to this practice as the vast majority of its customer base does not want their purchasing choices stained with the blood of whales.”

Norway’s whaling has escalated in recent years, as it raised its self-allocated quotas from 549 whales in 2001 to 1,286 today. The 2015 minke whale season opened on April 1 and, as of July 6, 534 whales had been killed. The country claims the right to whale legally due to its objection to the global moratorium on commercial whaling and its reservation to the ban on international trade in minke whales, although its quotas are not approved by the International Whaling Commission.

The Norwegian government and private entities have created marketing campaigns to boost domestic whale meat sales and SPAR Norway, the country’s fourth-biggest food retailer, is in the vanguard of these efforts. However, a 2014 opinion poll conducted in the UK and Germany found more than 80 percent of people would be unlikely to buy seafood from companies linked to whaling.

In 2005, an undercover investigation by EIA and others documented the harpooning of a minke whale by a Norwegian whaling vessel. The whale’s last visible movement was observed 14 minutes and 30 seconds after it was first struck. The Norwegian government’s official data shows that at least one in five whales do not die immediately after harpooning and suffer prolonged and painful deaths.

“Whale species are increasingly recognized as essential components of healthy, productive marine ecosystems and fish stocks,” said Paul Thompson, founder of CarbonFix Foundation. “To see nations such as Norway pointlessly destroying the very species that will help ensure the sustainability of their fishing industries is sheer madness and must end.”

The full text of “Convenience Kills” can be accessed here: http://awionline.org/sites/default/files/uploads/documents/Convenience-Kills-SPAR.pdf.

About Pro Wildlife
Pro Wildlife is a Germany-based charity dedicated to the conservation of wildlife, especially of species threatened by international trade. www.prowildlife.de

About CarbonFix Foundation
The CarbonFix Foundation is an international non-profit organization working in 14 countries to raise awareness of the catastrophic impact human climate change is having on biodiversity and ecosystems globally. www.carbonfix.it

About Robin des Bois
Robin des Bois is a non-governmental organization for the protection of man and the environment. The group brings together, nationally and internationally, all people and corporate bodies who desire to participate in the protection of the environment and of Man through non-violent actions, in the defense of endangered species, the safeguarding of natural habitats and the rational and equitable management of natural resources. www.robindesbois.org