The Case Against Marine Mammals in Captivity

The Case Against Marine Mammals in Captivity was first produced in 1995 as a comprehensive resource for the public, the media, scientists, students, and policymakers to learn the various 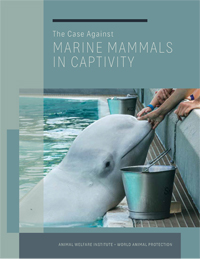 arguments against holding marine mammals for public display in zoos, aquaria, and marine theme parks. Marine mammals—a group of animals that are ecologically tied to the ocean environment—cannot thrive in confinement. No concrete tank or small sea pen can provide an animal with anything close to the complexity of the marine environment. Marine mammals, but especially the larger, wide-ranging predators such as whales, dolphins, and polar bears, simply do not belong in captivity.

The 5th edition of The Case Against Marine Mammals in Captivity is now available (translated versions below). A great deal has happened in the decade since the 4th edition was published. The 5th edition has several new chapters and many new endnotes describing research, events, and advances from the past 10 years that offer additional support for our arguments.

Chapter 4 – The Physical and Social Environment

Chapters 6 and 7 – Behavior and Stress