The rearing of farm animals today is dominated by industrialized facilities known as confined animal feeding operations, or CAFOs (often referred to as “factory farms”) that maximize profits by treating animals not as sentient creatures, but as production units. Raised by the thousands at a single location, animals are confined in such tight quarters that they can barely move, let alone behave normally.

In order to facilitate confinement of these animals in such stressful, crowded, unsanitary conditions, painful mutilations like cutting off the horns of cattle, cutting off the beaks of chickens, and docking the tails of sheep, pigs, and dairy cattle are routinely performed.

It doesn’t have to be this way. Alternative, high-welfare farming allows animals raised for food to have a life free of unnecessary pain and suffering, and the opportunity to exhibit normal behaviors. 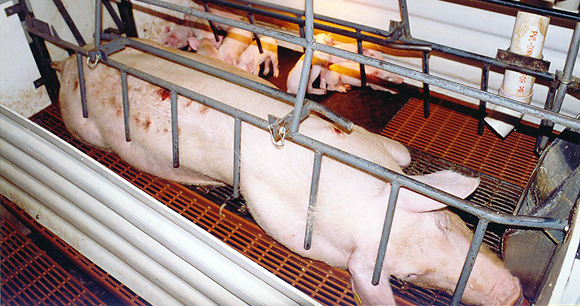 Antibiotic resistance, stemming from the use of antibiotics to promote growth and suppress disease within confinement operations, presents a serious health concern. The low-level dosing of livestock and poultry with antibiotics that are identical or related to drugs used in human medicine has contributed to the spread of multidrug-resistant infections in humans. The Centers for Disease Control (CDC) estimates that each year, 2 million people in the United States contract antibiotic-resistant infections and 23,000 die from such infections. The CDC has confirmed a link between the routine use of antibiotics in farm animals and the growing problem of antibiotic-resistant bacteria.

Animal and manure management on confinement operations, animal transport, conditions, and meat processing can also contribute to food contamination and food-borne illness like E. coli and Salmonella. A 2013 study by Johns Hopkins Bloomberg School of Public Health found an association between living near high-density pig operations or crop fields fertilized with manure from high-density pig operations and methicillin-resistant Staphylococcus aureus, commonly referred to as “MRSA.”

What’s Dual Production and Why Is It a Bad Thing?
AWI Fact Sheet

Use of Antibiotics in Animals Raised for Food
AWI Position Statement