Barn fires cause immense suffering, killing hundreds of thousands of farm animals every year. Some farm animals die almost immediately as fires burn through the barns, while others have to be euthanized later due to severe burns and smoke inhalation.

The Animal Welfare Institute released an updated report in January 2022, compiling information on the prevalence and causes of farm animal deaths due to barn fires during the preceding four-year period (2018–2021). During those years, over 2.99 million farm animals perished in barn fires. Nearly ninety-eight percent of those deaths were poultry. The six largest fires that occurred during the time period studied killed a staggering 1.76 million chickens. 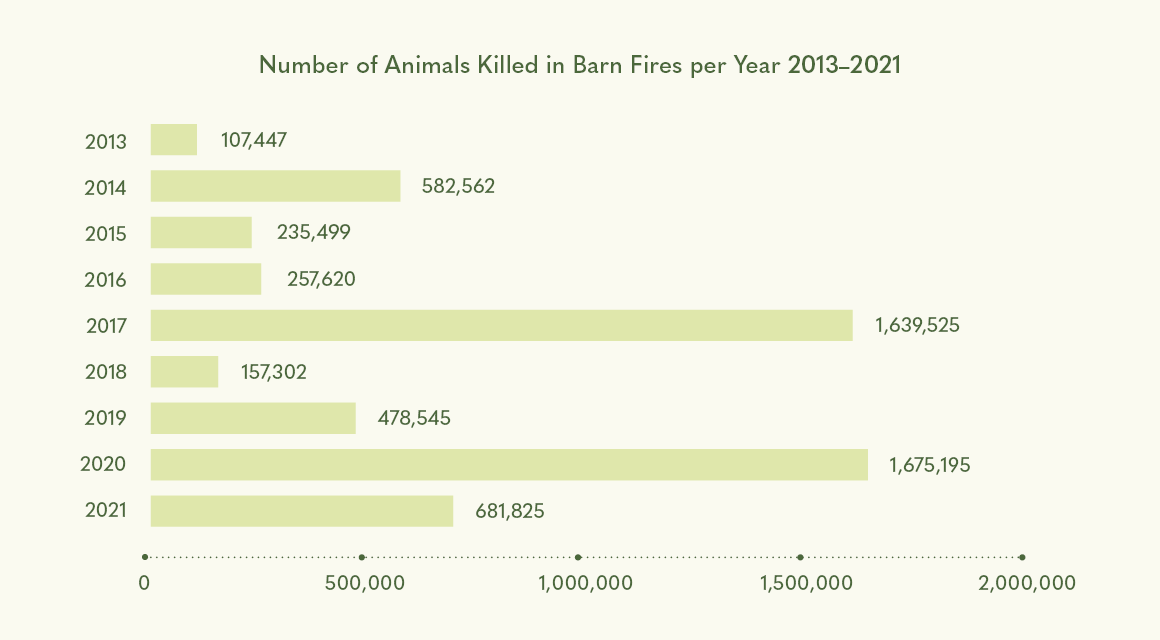 Most fatal barn fires occurred in colder states, particularly the Upper Midwest and the Northeast. New York, Ohio, Pennsylvania, Michigan, and Wisconsin had the highest number of barn fires, respectively. The amount of cold weather a state experienced appeared to be a greater factor in the prevalence of barn fires than the intensity of a state’s animal agriculture production. 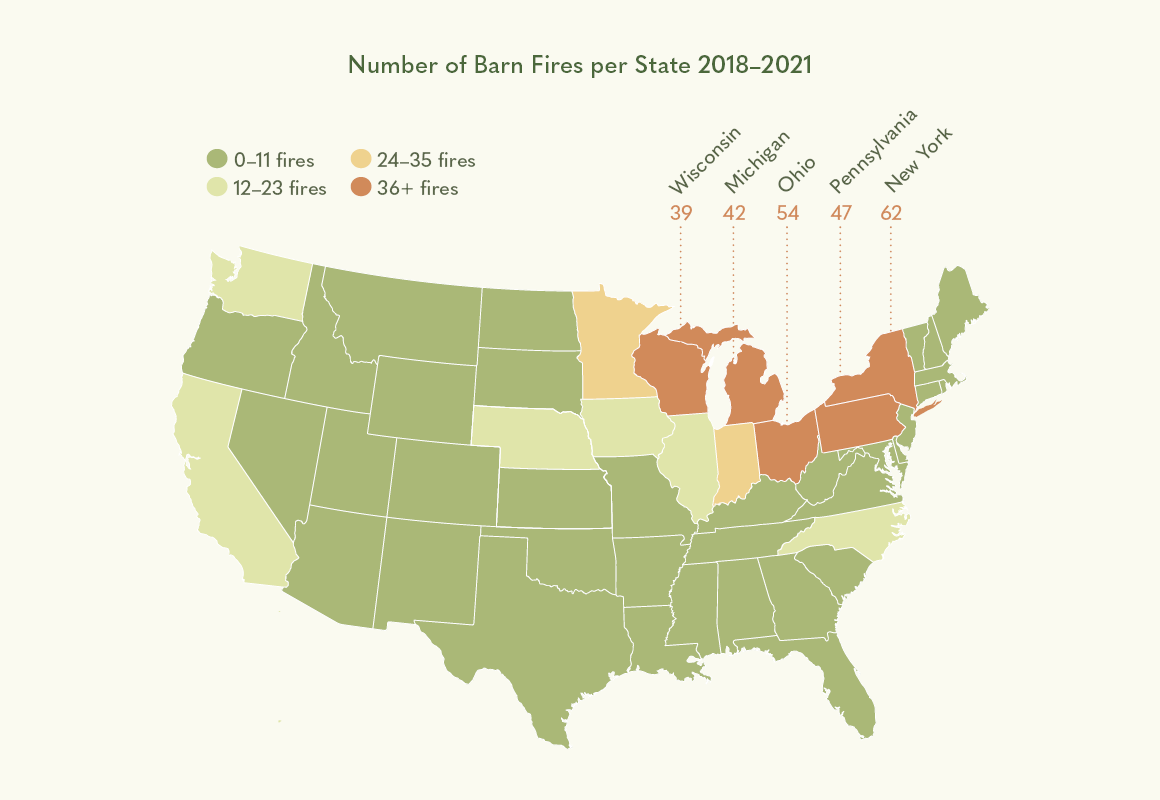 While weather seemed to play a primary role in the prevalence of barn fires, this was not the case in terms of the total number of deaths reported by state. What distinguished states with the highest total fatalities is that, in most, one or two catastrophic fires took the lives of hundreds of thousands of animals at once and accounted for nearly the entire death toll. Even in Michigan—a state that ranked high in both number of barn fires and total fatalities—two of the state’s 42 fires accounted for 96 percent of the total deaths. The top five states for total number of animals killed are as follows:

Findings from the report suggest that the biggest risk factors for barn fires are malfunctioning heating devices and other kinds of electrical equipment. Out of the 539 total barn fires that caused farm animal fatalities during the four-year period, the cause or likely cause of the incident was reported in 179 cases. In about 65 percent of those 179 cases, the confirmed or suspected cause was a malfunctioning heating device or other electrical issue. This significant percentage suggests that this equipment should be frequently checked, repaired, and replaced.

Seeing that most barn fires that caused animal deaths were due to heating devices and occurred in colder states, it is not surprising that the majority of fatal barn fires happened during colder months when there is an increased need for heating devices to keep farm animals warm. More than twice as many barn fires occurred in winter (January through March) than during the summer (July through September). 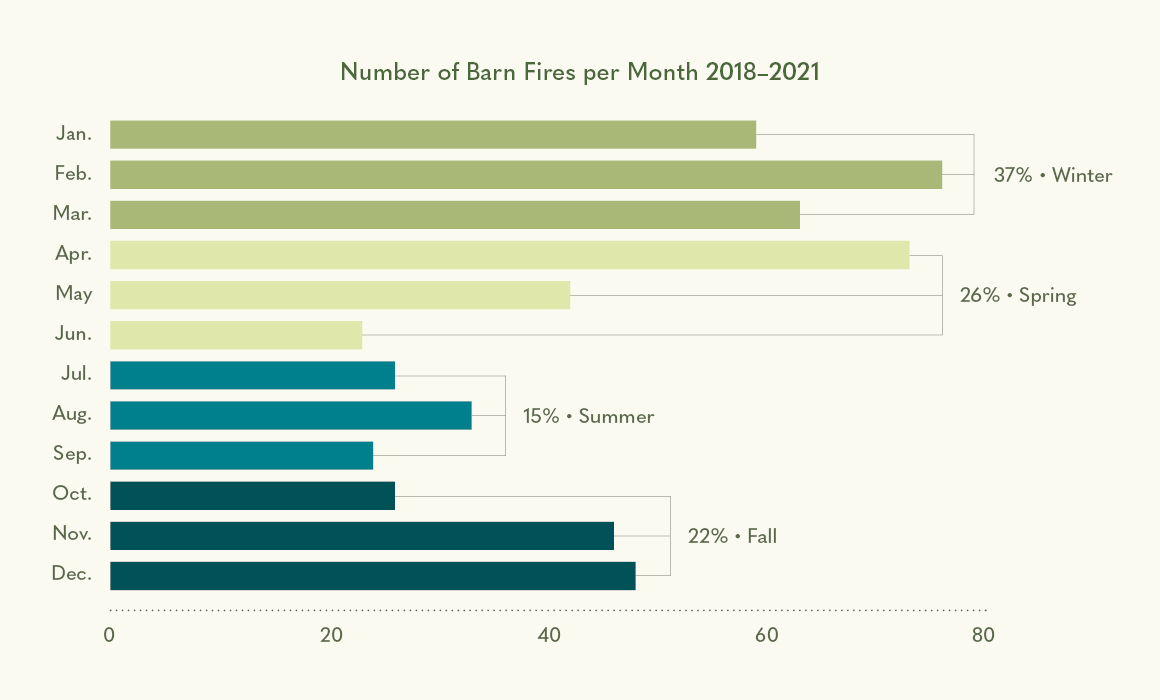 No farm animal deserves to die in a barn fire that could have been prevented. Thankfully, there
are a number of steps farmers can take—from improving everyday operational protocols to
investing in structural and facility renovations—to help prevent barn fires and promote fire safety. To minimize the risk of barn fires, AWI recommends farm owners implement the following fire protection methods: