In 1951, Dr. Albert Schweitzer gave his permission to the Animal Welfare Institute to strike a medal in his honor to be presented for outstanding achievement in the advancement of animal welfare. In granting his permission, Dr. Schweitzer wrote, “I would never have believed that my philosophy, which incorporates in our ethics a compassionate attitude toward all creatures, would be noticed and recognized in my lifetime.” 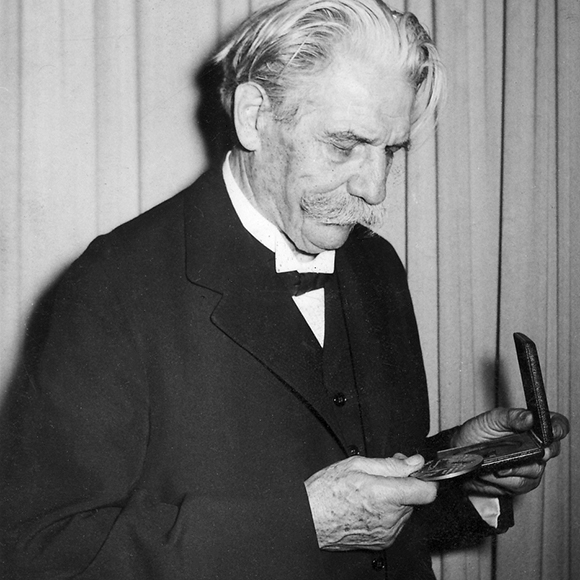 In December 1953, a gold replica of the medal was presented to Dr. Albert Schweitzer by Dr. Charles Joy in Oslo, Norway, where Dr. Schweitzer had gone to accept the Nobel Peace Prize. 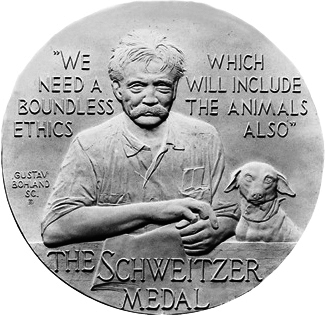 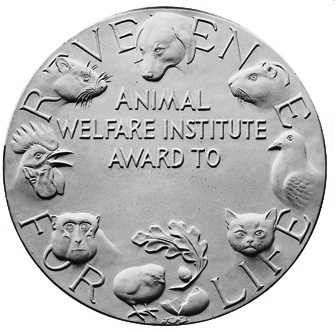 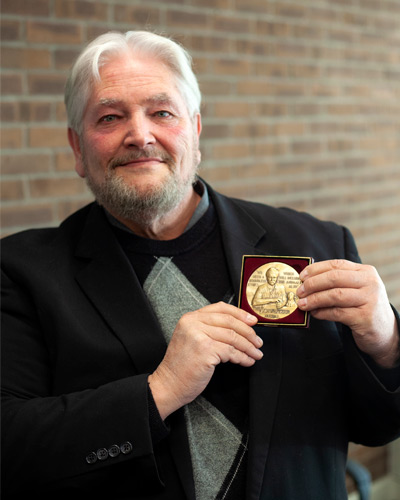 On March 7, 2019, AWI awarded the Schweitzer Medal to John Thompson in recognition of his extraordinary efforts to improve law enforcement’s recognition of animal cruelty as a crime of violence and its response to those crimes.

For Outstanding Contributions to Animal Welfare

On March 7, 2019, AWI awarded the Schweitzer Medal to John Thompson in recognition of his extraordinary efforts to improve law enforcement’s recognition of animal cruelty as a crime of violence and its response to those crimes.

Thompson, a seasoned law enforcement officer, worked with AWI to convince the FBI in 2014 to add animal cruelty crimes as a distinct category in the National Incident-Based Reporting System. In addition to this, he helped found the National Coalition on Violence Against Animals—a multidisciplinary coalition of local, state, and national organizations that seeks to reduce violence against animals and raise awareness of its link to human violence. He also helped found the National Sheriffs’ Association’s National Law Enforcement Center on Animal Abuse, which assists officers in understanding and enforcing animal cruelty laws. In January 2019, Thompson became executive director of the National Animal Care and Control Association, which seeks to strengthen the animal care and control profession through training, networking, and advocacy.

On April 10, 2018, AWI awarded the Schweitzer Medal to Dr. Samuel K Wasser, in recognition of groundbreaking work that has contributed enormously to the fight against wildlife trafficking.

Wasser is the endowed chair in Conservation Biology and director of the Center for Conservation Biology at the University of Washington. He has pioneered noninvasive methods to measure the abundance, distribution, and physiological condition of wildlife from their droppings, relying on detection dogs to locate these samples over large wilderness areas. He applies these tools to forensic analyses of transnational wildlife crime, as well as to address the impacts of poaching, oil development, and overfishing on the well-being of endangered wildlife populations.

Based on DNA analyses of elephant dung, Wasser has assembled a DNA reference map of elephants across Africa that is widely used to determine the geographic origins of poached ivory. The map has enabled his team to identify Africa’s largest elephant poaching hotspots, track the number and connectivity of major ivory traffickers operating in Africa, and uncover strategies that transnational organized crime syndicates use to acquire and move their contraband around the world. This work has led to prosecutions of major transnational ivory traffickers and nurtured key collaborations with national and international law enforcement agencies, including INTERPOL, Homeland Security Investigations, the US Fish and Wildlife Service (USFWS), and wildlife authorities in numerous source and transit countries across Africa and Asia.

On Thursday, June 27, 2013, the Animal Welfare Institute (AWI) presented the Albert Schweitzer Medal to journalist Tom Knudson of the Sacramento Bee for his outstanding investigative journalism and commitment to both thorough research and candor in writing and publishing a series of articles examining the United States Department of Agriculture’s Wildlife Services program.

Mr. Knudson’s tireless research and dedication to informing the public about the use of their tax dollars for inhumane, ineffective and ecologically damaging wildlife management methods exposed the secretive agency’s operations and led to calls for reform. By clearly and objectively presenting the information that he uncovered in the course of his investigation, Mr. Knudson provided the American public with much-needed information about Wildlife Services’ irresponsible practices and brought national attention to this critical issue.

On Monday, November 14, 2011, US assistant attorney general Laurie Robinson, who heads the US Department of Justice’s Office of Justice Programs, presented the Albert Schweitzer Medal to three outstanding prosecutors.

Michelle Welch, assistant attorney general for Virginia, for her strong prosecution of animal cruelty and animal fighting cases and her work training other prosecutors and animal control and law enforcement officers; and to Raj Prasad and Amy Slameka, assistant prosecuting attorneys for Wayne County, Michigan, for co-founding the county’s Animal Protection Unit and their work training local investigators and animal control officers.

Greg Fett, manager of a tire shop in Arkansas, for his heroic rescue, on two separate occasions, of several horses he found severely injured, malnourished, and dehydrated on vehicles transporting the animals to slaughter. The medal was presented by Congressman John Conyers.

Gail Eisnitz, author and humane investigator, for her courageous and unrelenting efforts to document, expose, and prevent widespread animal abuse in factory farms and slaughterhouses. The medal was presented by John Mackey, CEO of Whole Foods Market.

Henry Spira, for his successful campaigns against unnecessary experiments on animals and face branding of cattle and for his pioneering efforts to prevent cruel confinement of hens, pigs, and calves in factory farms. The Albert Schweitzer address was given by the Honorable Charles Percy.

Michael Tillman, for thwarting commercial whalers, reversing the Revised Management Procedure, and maintaining the moratorium on whale killing for profit at the 1993 International Whaling Commission meeting in Kyoto, Japan. The medal was presented by actor Jason Robards.

Allan Thornton and Dave Currey of the Environmental Investigation Agency, for achieving international protection for elephants and dolphins by exposing cruel and illicit commercial killing. The medal was presented by Senator John Heinz.

Astrid Lindgren, author of Pippi Longstocking and other classics of children’s liteature, for her work to impel the Swedish government to enact the world’s most comprehensive law against cruel factory farming practices. The medal was presented by Congressman Charles Bennett.

Dr. Jane Goodall, for her lifetime of work as a defender of chimpanzees. The medal was presented by Senator John Melcher, author of the requirement for psychological well-being of primates in the Improved Standards for Laboratory Animals Act.

Senator Robert Dole, whose leadership ensured enactment of the 1985 Improved Standards for Laboratory Animals Act and the 1978 humane slaughter legislation.

Dr. Dallas Pratt, for his landmark books, especially Alternatives to Pain in Experiments on Animals. The medal was presented by Senator Mark Hatfield.

Roger and Katharine Payne, for leadership in the protection of whales through observation of living humpback and right whales. The medal was presented by Senator Paul Tsongas.

Shri H.M. Patel, chairman of the Indian Board for Wildlife, for his contributions to wildlife conservation and humane education as India’s finance minister.

Yoko Muto, animal caretaker of Tokyo University and representative of the Japan Animal Welfare Society, for her seven years of unstinting effort to allay the suffering of thousands of dogs subjected to experimental surgery by gentle, personal nursing care given to each animal. The medal was presented by Mike Mansfield, the US ambassador to Japan.

President Daniel Oduber of of Costa Rica, for outstanding achievement in creating major national parks in Costa Rica where wildlife can flourish. The medal was presented by Senator Hubert H. Humphrey.

Fay Brisk, who uncovered cruelty and theft by dealers selling dogs for experimentation in the 1960s and initiated an animalport in Washington, DC, to help animals transported by air. The medal was presented by Senator Lowell Weicker.

Dr. Lee Talbot, who successfully fought the spread of cruel poisons on federal lands. The medal was presented by the Honorable Russell Train, administrator of the Environmental Protection Agency.

Scott McVay, who obtained the listing of all the great whales on the US Endangered Species List. The medal was presented by Dr. Lee Talbot, senior scientist for the Council on Environmental Quality.

Russell Train, chairman of the President’s Council on Environmental Quality, who obtained unanimous adoption of a resolution for a 10-year moratorium on commercial whaling at the UN Conference on the Human Environment. The medal was presented by S. Dillon Ripley, secretary of the Smithsonian Institution.

Congressman Thomas Foley, who won enactment of the Animal Welfare Act amendments of 1970, including the requirement for “appropriate use of anesthetic, analgesic and tranquilizing drugs” for animals in research. The medal was presented by Senator Warren G. Magnuson.

Bob Cromie, whose hard-hitting columns against cruel experiments by school children resulted in Westinghouse Science Fair prizes being changed to eliminate any experimentation on captive vertebrates. The medal was presented by Senator Charles Percy.

Stan Wayman, Life photographer, whose “Concentration Camps for Dogs” and other photo essays brought recognition to millions of people that animals need protection.

Dr. Francis Mulhern and Dr. Earl Jones of the US Department of Agriculture, who prevented much suffering by their enforcement of the Laboratory Animal Welfare Act.

Senator Warren G. Magnuson and Senator A.S. Mike Monroney, who sponsored and fought for enactment of the Laboratory Animal Welfare Act, which passed by a vote of 85–0 in the Senate and was subsequently signed into law.

Abe Fortas, associate justice of the Supreme Court of the United States, for authoring, during his time as a private attorney, the first federal bill to require humane treatment of animals in research.

Patrolman John Mobley of the Detroit Police Department, whose prompt reporting on suffering and neglect of animals in experiments led to improvements in their care.

Ann Cottrell Free, author and journalist, whose discovery and reporting on hundreds of dogs in research at the Food and Drug Administration, perpetually caged in a sub-basement, led to action by Congress to provide comfortable kennel runways for them.

Rachel Carson, author of Silent Spring, for her contribution to the protection of animals from dangerous pesticides such as DDT. The medal was presented by renowned ornithologist Dr. Robert Cushman Murphy.

Isobel Slater and Chief Z.S. Fundikira, founder and president, respectively, of the Tanganyika branch of the Royal Society for the Prevention of Cruelty to Animals, with 40,000 African members. The Honorable G. Mennen Williams presented the medals in Tanganyika (now Tanzania). In New York, the Honorable Adlai E. Stevenson gave the Schweitzer award address.

Congressman W.R. Poage, chairman of the Livestock and Feed Grains Subcommittee of the Committee on Agriculture, US House of Representatives, and chief House sponsor of the federal Humane Slaughter Act.

Paul Kearney, author of “The Case for Humane Vivisection,” the first article in a national magazine calling for humane treatment of animals in research.

Major Charles W. Hume, founder and director-general of the Universities Federation for Animal Welfare, which develops and promotes improvements in the welfare of animals through scientific and educational activity.

Dr. Robert Bay, veterinarian in charge of a colony of 500 beagles used in research, whose humane treatment of the animals exemplifies the purpose for which the Schweitzer Medal was struck. Dr. Bay later resigned after being refused permission by new management to end the suffering of a beagle with 24 fractures.