Simple techniques have been recently developed to pair previously single-caged rhesus macaques with compatible conspecifics as a means of social environmental enrichment (Reinhardt et al. 1989 a). Paired animals spend more than 20% of the time interacting with each other in species-typical ways (Reinhardt 1990a). Pair-housing does not interfere with common research protocols (Reinhardt et al. 1989b), but it could possibly jeopardize the quality of research if paired subjects, unlike singly caged subjects, were to suffer social distress by constantly being exposed to one another (Novak and Suomi 1988; Line et al. 1989; Sapolski 1990).

Fifteen adult female and 15 adult male, rhesus macaques (Macaca mulatta) born at the Wisconsin Regional Primate Research Center were the subjects of this study. Five monkeys of each sex were single-housed while the other 10 monkeys were pair-housed. Single-housed and pair-housed males showed no significant difference in age (mean of single-housed females = 7.8 ± 2.6 years vs. mean of pair-housed females = 7.2 ± 2.2 years, p > 0. 1); the same was true for females (mean of single-housed males = 10.2 ± 2.8 years vs. mean of pair-housed males = 11.4 ± 3.1 years, p > 0. 1). Single individuals had lived alone for 3.2 ± 2.7 years; they were housed in 85 cm x 85 cm cages and had visual contact with other conspecifics. Paired companions had lived together for 2.1 ± 1.6 years; they shared 85 cm x170 cm x 85 cm double cages. All cages were provided with PVC pipes and loose branch segments for the purpose of inanimate environmental enrichment (Reinhardt (1989b). The animals were fed commercial dry food at-07:30 and fruit at 15:00. Water was available ad libitum. Room temperature was maintained at 20-22ºC, with a relative air humidity of 40-60% and a 12 hr artificial light/dark cycle.

The 30 rhesus macaques were trained to cooperate during in-homecage venipuncture (Vertein and Reinhardt 1989; Reinhardt 1991). Each monkey was bled when it was guaranteed that there were no disturbances during one hour before blood collection and at the time of blood collection (i.e., no flushing of drop pans, no personnel in hallways and animal rooms). Males were bled at 12:00, females at 13:15. The mean time required by the attending caretakers from entering an animal room to puncturing a saphenous vein of a monkey was 74 ± 29 seconds for single-housed, 80 ± 32 seconds for pair-housed animals. Blood samples were centrifuged at 2,000 rpm for 10 min and the serum stored at -20ºC within one hour of collection. Subsequent analysis for cortisol was done with a Clinical assays gamma coat cortisol kit (Dade, Baxter Travenol Diagnostics, Cambridge, MA).

Dominance-subordination relationships of paired animals had been determined initially at the time of pair formation (Reinhardt et al. 1988; Reinhardt 1989); their stability was confirmed daily during routine health checks. Unidirectional fear-grinning and yielding were taken as signs indicative of subordination.

Statistical analysis was done with the Mann Whitney test (Siegel, 1956). 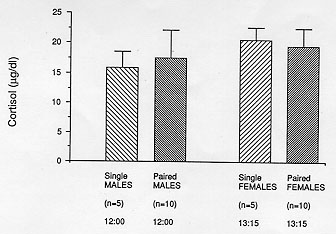 Taking serum cortisol concentrations as parameters for the evaluation of distress (Clarke et al. 1988; Kaplan 1986; Sassenrath 1970; Tapp et al. 1984; Udelsman and Chrousos 1988) the present data indicate that neither female nor male adult rhesus macaques experience more distress when sharing a cage with a compatible partner of the same sex than when living alone.

The study failed to detect a difference in serum corticol concentrations between dominant and subordinate partners of both female and male pairs. Apparently, partners were well compatible and it was not a socially distressing situation for subordinates to be constantly exposed to their dominant counterparts.

The findings lead to the conclusion that isosexual pair-housing of adult rhesus macaques for the purpose of social environmental enrichment does not impose more distress than single-housing and hence is unlikely to constitute an extra data-biasing variable into research protocols.

We are grateful to Mrs. J. Scheffler for analyzing the blood samples. Thanks are also due to Dr. D. Houser for providing valuable comments on this manuscript and to Mr. J. Wolf for editing the text. This project was supported by NIH grant RR-00167 to the WRPRC.

- Behavioral responses of unrelated adult male rhesus monkeys familiarized and paired for the purpose of environmental enrichment. Am. J. Primat. 1989; 17: 243-248.

This article originally appeared in the Journal of Experimental Animal Science 34, 73-76, 1991. Reprinted with permission of the publisher.