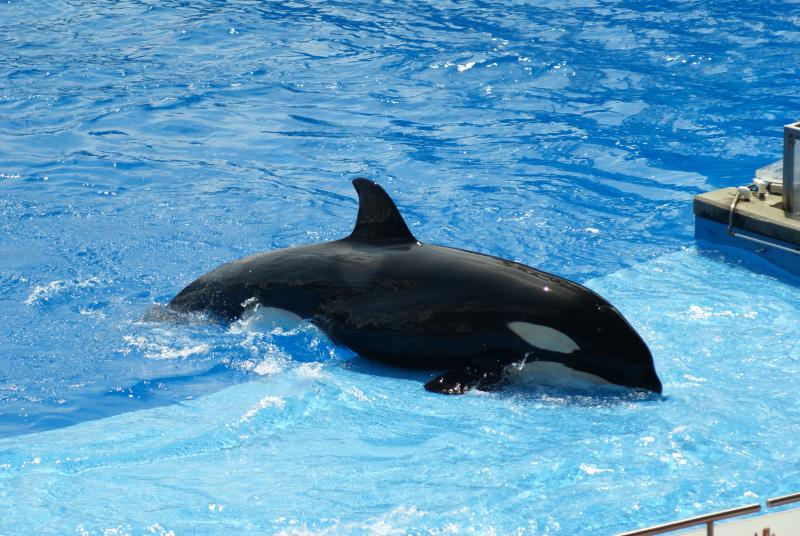 Los Angeles, CA–At a press conference on Friday, Rep. Adam Schiff (D-CA) announced that he will introduce the Orca Responsibility and Care Advancement (ORCA) Act. This landmark legislation would phase out the captivity of orcas so that their display ends with this generation. Specifically, it would prohibit the breeding, the taking (wild capture), and the import or export of orcas for the purposes of public display. This legislation will also allow for the orderly phasing out of the display of this species, giving orca-holding facilities time to transition to a more humane future. Rep. Jared Huffman (D-CA), though unable to attend the press conference, is an original co-sponsor of the legislation.

“The evidence is very strong that the psychological and physical harm done to these magnificent animals far outweighs any benefits reaped from their display,” said Rep. Adam Schiff. “We cannot be responsible stewards of our natural environment and propagate messages about the importance of animal welfare when our behaviors do not reflect our principles. The ORCA Act ensures that this will be the last generation of orcas who live in captivity, and we will appreciate these incredible creatures where they belong – in the wild.”

During the press conference, several experts and State Assemblyman Richard Bloom (D-Santa Monica), the sponsor of previous legislation to ban the use of orcas for performance purposes at California aquatic theme parks, spoke in support of Schiff’s bill.

“The growing body of scientific evidence is compelling for orcas,” said Dr. Naomi Rose, marine mammal scientist for the Animal Welfare Institute. “They are simply too large, too wide-ranging, too socially complex, and too intelligent to thrive in any-sized concrete enclosure. Orcas do not belong in captivity.”

“As a former Marine Mammal Trainer at SeaWorld, I saw firsthand how orcas suffer in captivity,” said former marine mammal trainer Samantha Berg. “No amount of toys, larger tanks, better veterinary care or love and attention from their trainers will ever come close to simulating the richness of their lives in the ocean. We cannot meet their needs in captivity.”

"There is no justification for the continued captive display and breeding of orcas for entertainment purposes," Assemblyman Richard Bloom said. "They belong in their natural habitat where they can travel long distances and feed as predators do. These magnificent creatures are much too large and far too intelligent to be confined in small, concrete tanks for their entire lives. It is time to end the practice of keeping orcas captive for human amusement."

“The failure of our government to adequately protect captive Orcas based on modern science is shameful, and it’s time to phase out the public display of these intelligent, social animals,” Rep. Jared Huffman said. “Orcas belong in the wild.”

The current global population of captive orcas has two sources – wild capture and captive breeding programs. Under current federal law, the federal government can issue permits for the capture or import of orcas for the purposes of public display. This is how, in the past, U.S. display facilities legally acquired orcas from the wild. While a wild capture of an orca has not occurred in U.S. waters since 1976, and wild-caught orcas from other parts of the world have not been imported since 2001, permits can still be issued legally. All other captive orcas have been bred in captivity. These practices would be prohibited under the ORCA Act.

The United States Department of Agriculture (USDA) is currently considering updating decades-old federal regulations for captive marine mammals. However, while updated standards may improve the welfare of smaller, more adaptable marine mammals, no amount of regulation can ensure that orcas thrive while in captivity. Unlike other intelligent animals, there is no indication that the population of captive orcas will see any relief. Recently, Ringling Bros. Circus announced that it will retire its performing elephants, and the National Aquarium announced that it will be retiring its dolphins. No such announcements have been made for the population of captive orcas in the U.S., and in fact, holders of captive orcas are doubling-down on their belief that captivity is not detrimental to the health and well-being of orcas.

Other organizations also came out in support of the ORCA Act, including the Humane Society of the United States, Humane Society Legislative Fund and People for the Ethical Treatment of Animals.

“PETA applauds Rep. Schiff for introducing a bill that reflects public opinion in favor of ending the archaic and cruel practice of keeping orcas in captivity,” said Jared Goodman, Director of Animal Law for People for the Ethical Treatment of Animals (PETA). “Everyone from children to members of Congress now recognizes that in SeaWorld’s tanks, orcas suffer both physically and psychologically, are drugged, die prematurely, and lash out as a result of extreme frustration. The passage of this bill would mark the beginning of the end of that kind of marine prison in the US.”