Washington, D.C. -- Just days after a committee of the U.S. House of Representatives tried to kill legislation aimed at curtailing commercial horse slaughter in the United States, a Mississippi man hauling 19 horses to a Texas slaughterhouse has been charged with animal cruelty involving horses in Arkansas.

Bryan Morgan of Belmont, MS was charged with five counts of animal cruelty under Arkansas state law in Texarkana this week after eyewitness testimony, photographs and video showed 19 horses being transported in a single trailer to the BelTex slaughterhouse in Fort Worth were badly injured and abused.

"This only further demonstrates the immediate need for my legislation to be passed and signed into law," said Rep. John Sweeney (R-NY), who with Rep. John Spratt (D-SC) and Rep. Ed Whitfield (R-KY) is leading the fight to outlaw horse slaughter. "This is a perfect example of why I am so committed to seeing an end to this brutal practice as quickly as possible."

Although it is what one congressional witness, Texas oilman T. Boone Pickens, called "America's dirty little secret," some 90,000 horses are hauled to three U.S. slaughterhouses in Texas and Illinois each year and butchered for human consumption, with the meat exported to Europe and Asia and sold as a delicacy in high end restaurants. 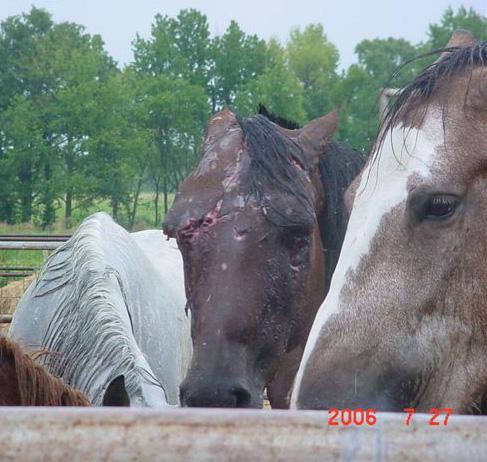 "If there were any doubt that the horse slaughter industry leads to cruelty and abuse of horses, this erases it with graphic reality," said Chris Heyde, deputy legislative director of the Animal Welfare Institute (AWI), based in Washington, D.C.  The American Horse Slaughter Prevention Act (H.R. 503) is scheduled to be voted on by the House of Representatives in early September.

In the Arkansas case, Morgan picked up the horses in Mississippi and was driving to Fort Worth when the trailer he was pulling blew two tires and forced him to stop in Texarkana for repairs.  Employees at the shop called local police after noticing several horses had abrasions and marks across their faces and bodies, including one with facial gashes and swollen eyes.

"It looked like someone took a baseball bat and beat the hell out of the horse," said Greg Fett, manager of GCR Tires in Texarkana.

Twenty citations for animal cruelty were initially written by local police, after which Morgan was allowed to drive the horses on to the slaughterhouse.  This incident illustrates how woefully inadequate the regulations of the United States Department of Agriculture (USDA) are in ensuring the humane treatment of horses being transported to slaughter facilities.

"The local police in Texarkana were particularly diligent in this situation," said AWI general counsel Tracy Silverman.  "Often we just never hear about these cases and thankfully responsible citizens alerted authorities to the severely injured animals."

At a hearing before the House Agriculture Committee on July 28, Chairman Bob Goodlatte (R-VA) condemned the legislation that would stop commercial horse slaughter as an unwarranted intrusion on the rights of horse owners.  The committee allowed the bill to go to the House floor for a vote, but only after deriding it as unnecessary and unfair to horse owners.

AWI will assist in the prosecution of Morgan and is filing a formal complaint with the USDA against Robbie Solomon of Belmont, MS, the owner and shipper of the horses, for violating several federal regulations regarding the commercial transportation of horses to slaughter.