Heroes' Hayden Panettiere to Cheer for Whales in the Nation's Capital 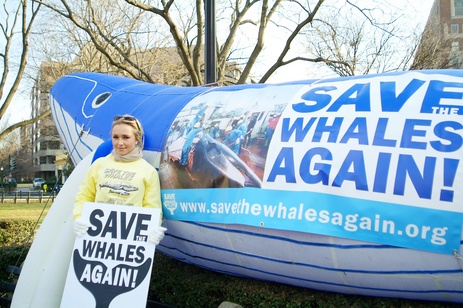 Washington, D.C. -- Actress Hayden Panettiere, who plays cheerleader Claire Bennet on NBC's hit series Heroes, will lead a rally against a resumption of commercial whaling at 1 p.m. this Sunday, January 27, in Washington, D.C.'s Dupont Circle (event flyer). The event kicks off a whirlwind trip to the Nation's Capital for Panettiere, who will later speak with policymakers and students to encourage increased whale protection.

Panettiere is a spokesperson for the Save the Whales Again! campaign, which is calling on the United States to stand up for whales at the International Whaling Commission and take diplomatic and economic action against whaling countries. After the rally, she will speak at Georgetown University. On Monday, she will meet with representatives from the embassies of Japan, Norway and Iceland to question their outdated whaling practices.

"Whales face increasing threats from climate change, ship strikes, entanglement in nets, and chemical and noise pollution, yet Japan, Norway and Iceland continue to kill them in increasing numbers," Panettiere said. "I am looking forward to talking with officials who actually make and carry out our policies, as well as fellow young people who will be voting in the upcoming election - I want our voice to be heard."

On Tuesday, Panettiere will speak at a 1 p.m. press conference hosted by House of Representatives Natural Resources Committee Chair Nick Rahall (D-WV). She will be joined by Rahall and Senator John Kerry (D-MA) in urging the US Government to reinstate its former leadership role protecting whales from commercial slaughter. An evening reception with Members of Congress and their staff is the final stop on her trip.

"Over 25,000 whales have been slaughtered for profit since the ban on commercial whaling was instituted. The United States is the current chair of the IWC and it must stand up to whaling countries and use its position to lead the world in conserving whales and their habitats," said Susan Millward, director of marine animal programs at the Animal Welfare Institute, a co-founder of the Save the Whales Again! campaign.

Despite the public's interest in protecting whales, US leadership on whale issues has significantly declined over the past five years. Most recently, the United States refused to join with 30 nations and the European Commission in a diplomatic protest against Japan's Antarctic whaling program.

"Recent polls show that over 75 percent of registered voters oppose whaling, and over two thirds want our government to do something about it, yet to this point, little has been done to stop the increasing slaughter," said Jeff Pantukhoff, president and founder of the Whaleman Foundation and executive director of the Save the Whales Again! campaign. "We need the United States to reflect the will of its people and lead the way in taking all necessary actions against Japan, Norway and Iceland until the killing stops."

Save the Whales Again! is a campaign of The Whaleman Foundation and the Animal Welfare Institute. The Animal Welfare Institute, founder of the original "Save the Whales" movement, was established in 1951 to reduce the sum total of pain and fear inflicted on animals by humans. The Whaleman Foundation is an oceanic research, conservation and production organization dedicated to preserving and protecting dolphins, whales, and their respective habitats.