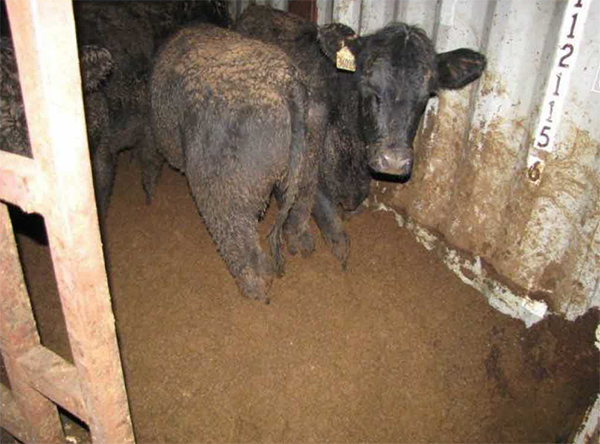 Washington, DC—The Animal Welfare Institute (AWI) stated that changes are needed to U.S. animal export to address the gross violations of international animal welfare code occurring on shipments of farm animals leaving the United States. Some of those changes are reflected in new rules recently proposed by the U.S. Department of Agriculture’s (USDA) Animal and Plant Health Inspection Service.

Live animal exports are up dramatically. Over the past five years, approximately 625,000 animals—primarily cattle—were sent to distant locations such as Turkey and Russia. Most of these animals were transported by ship on voyages lasting up to three weeks, and at least some of these lengthy journeys resulted in an unacceptably high number of animal deaths.

“We don’t know how many animals become sick or die on these voyages, because even the U.S. exporting authorities don’t have this information,” said Dena Jones, director of AWI’s farm animal program. “However, we do know that these instances are occurring because importing countries have raised serious concerns about U.S. shipments, and at least one country has threatened to stop accepting animals.”

Given the stresses associated with long distance transport—including high noise levels, poor ventilation, and excessive heat and humidity—a disaster involving U.S. cattle was all but inevitable. That inevitability came in August 2012, when more than 1,000 breeding dairy cattle of 3,400 shipped from Galveston, Texas, to Russia died during the voyage or shortly after arrival. The deaths were attributed to a breakdown in manure removal and ventilation systems, causing the animals to suffocate on ammonia fumes. When questioned about the incident, USDA officials admitted they have no knowledge of what happens to animals after leaving the United States or of how many animals fall ill or die.

In communications with USDA officials, Russian authorities cited a number of problems with the shipment that they considered to be a “gross violation” of the World Organization for Animal Health’s animal health code for “Transport of Animals by Sea.” Russia requested an investigation by the USDA and threatened to suspend imports of U.S. cattle by sea if the situation was not satisfactorily resolved. Russian authorities subsequently requested investigations into at least two additional U.S. shipments involving high animal mortality.

The proposed regulations would make a number of improvements to the existing export regulations. Some of the new requirements benefiting animals include: reporting of mortalities for all shipments; onboard back-up systems for feeding, ventilation, and manure removal; reporting of any failure of a major animal life support system; and recertification of any vessel experiencing a life support system failure. The proposed rule change also responds to a 2011 petition from AWI requesting that the USDA add internationally recognized “fitness to travel” requirements to the regulations.

According to AWI, the animal export regulations could be further improved by adding alarms for life support systems; routine monitoring of temperature, humidity and gas concentrations; and a requirement that at least one veterinarian accompany each shipment of animals.

AWI believes that, while amending the export regulations should help reduce mortality, new rules won’t solve the problem. “It’s simply not possible to ensure the health and welfare of animals on such long journeys,” said Jones. “With other alternatives readily available today, there is no justification for shipping live animals around the world on these nightmarish journeys.”