Recently there has been an increase in research devoted to improving the behavioural aspects of housing captive animals (Markowitz, 1982). It is evident that if an animal is adapted to spending much of its waking time searching for and processing food, this waking time must be taken up in other ways when the animal is captive and when food is provided independent of its behaviour. Other behaviours might increase, be modified, or created to fill the free time. Abnormal, aggressive, and/or affiliative behaviours tend to increase in captivity, depending on the species and the degree of change caused by the housing conditions.

It has been shown that providing monkeys with a floor-covering such as woodchips, containing an incentive such as grain, has several advantages, including reduced aggression and inactivity, more even use of space, and improved hygiene (Chamove & Anderson, 1979; Chamove et al, 1982). In an effort to further understand the beneficial effects of using a deep-contact litter containing grain, in the experiment reported here we asked 6 questions:

Eight young stumptailed macaques (Macaca arctoides) were tested, part of a group of ten that had been housed in an indoor/outdoor enclosure (floor area 36 sq. in) for several months. Five conditions were used, each lasting two consecutive days. Existing litter was cleared and 38 kg of clean woodchips were spread on half of the floor of the outside area to a depth of 4 cm. An equal weight of woodwool was spread over the other half. After two days testing began:

We recorded all instances of the following behaviours which occurred during an average of 110 1-minute scans conducted daily: aggression, abnormal, foraging, manipulate litter, manipulate environment. We also recorded the location of the monkeys performing the behaviours, i.e. on woodchips, on woodwool, or off the substrate. An analysis of variance using the percentage of scans recorded was used to assess the data for each behaviour.

The main results are shown in Figure 1. In the first clean litter condition the monkeys were recorded foraging 3 per cent of the time. After two days of deprivation, foraging on the returned litter approximately doubled. Adding grain to the litter caused a huge increase in foraging, to over 30 per cent of the time, this dropping by about half when free grain 'was offered, but foraging was still much more common than with no grain in the litter. These results indicate that finding grain in the litter is rewarding for the monkeys, even if grain is freely available without the need to search for it. Furthermore, monkeys will search through grain-free litter for no food reward, and this behaviour shows an increase after they have been deprived of the opportunity for such foraging. This suggests the presence of a 'drive' which finds an outlet in the deep litter.

Compared to the grain condition, the free grain days produced few other effects. In contrast, the monkeys were more aggressive, 'and manipulated the litter more (mainly playfully) during the first litter condition than in the grain condition. The second litter condition, i.e. after two days of deprivation, showed an increase in play on the litter compared to the first. In the bare condition the monkeys showed most play, aggression and 'abnormal' behaviour (mostly self-aggression).

The monkeys showed a general preference for the woodwool, manipulating it twice as much, and playing in it thrice as much as the woodchips (see Figs 2 and 3).

A final summary comparison between the bare floor and litter with grain showed that in the latter monkeys foraged more, manipulated the environment less, were less aggressive (towards others and themselves), and played less. The decrease in play is more than offset by the increase in foraging and the decrease in aggression. 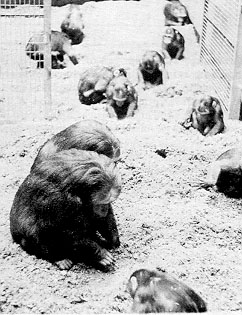 This study shows that when deprived of the opportunity to forage, monkeys compensate by increasing other behaviours; our young group showed increases in play, aggression, manipulation of the environment, and abnormal behaviours, primarily self-aggression. A litter substrate reduces these behaviours and encourages foraging, even in the absence of grain. In another study we have also shown that the beneficial effects of deep litter:

This article originally appeared in Standards in Laboratory Animal Management, pp 253-256; Potters Bar: The Universities Federation for Animal Welfare, 1984.
Reprinted with permission of the publisher.