In early 2008, a slaughterhouse investigation revealed multiple incidents of egregious cruelty to cattle at the Westland-Hallmark Meat Packing Co. in Chino, California, resulting in widespread public outrage and the largest beef recall in US history. Congress held multiple oversight hearings in the aftermath, and the US Department of Agriculture took several actions to step up its enforcement of the humane slaughter law.

A 2010 report by AWI found that the enforcement of the federal Humane Methods of Slaughter Act at both federal and state livestock slaughter establishments increased dramatically following the Westland-Hallmark investigation. AWI conducts surveys of humane slaughter enforcement every two to three years, and subsequent surveys have shown that this increased level of enforcement continued into the next decade. Major findings of our most recent research, which covers the period 2016–2018, include the following:

Inadequate stunning was the most frequently cited type of humane handling violation at both state and federal plants. Stunning is the process in which animals are rendered insensible to pain before they are shackled, hoisted on the slaughter line, and/or cut. The percentage of violations for ineffective stunning has increased dramatically over the past decade, as the USDA and state departments of agriculture placed greater emphasis on monitoring the stunning phase of slaughter (see figure below). 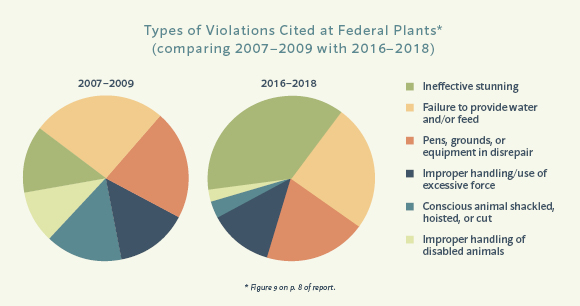 Repeat federal and state violators present a significant enforcement problem. However, in this review, AWI observed fewer examples of repeat violators than in past surveys. Although the USDA has declined to pursue criminal prosecution for humane slaughter violations, it is taking stronger administrative actions, including filing for permanent withdrawal of inspection and entering into consent orders with some repeat violators.

While humane slaughter enforcement is up at both the federal and state levels, it remains low in comparison with other aspects of food safety enforcement. Resources devoted to humane handling at the federal level continue to constitute less than 3 percent of total funding for food safety inspection.

Based on our review of humane slaughter enforcement records, AWI is offering the following recommendations to federal and state meat inspection programs:

Humane Slaughter Update: Federal and State Oversight of the Welfare of Farm Animals at Slaughter is available as a free PDF download at www.awionline.org/humane-slaughter-update.

Note: AWI conducts its humane slaughter enforcement surveys by submitting public records requests to the USDA and state departments of agriculture. While states respond in a relatively expeditious manner to public records requests, we must wait months, if not years, for the USDA to respond. This delay seriously limits the usefulness of the information contained in the records and negatively affects AWI’s advocacy efforts, including the publication of this report. Consequently, in 2018, AWI and Farm Sanctuary sued the USDA for its failure to comply with a provision in the Freedom of Information Act that requires proactive disclosure of records subject to repeated requests. The lawsuit is pending.