International transport of farm animals by sea vessel is a major animal welfare issue, particularly for long-distance journeys, such as those taken by cattle and sheep from Europe and Australia to the Middle East and North Africa. While little is reported about the involvement of the United States in the practice, AWI has been monitoring international export shipments over the past decade.

Within the last five years, an estimated 2,211,394 live farm animals were exported from the United States to other countries. A majority of these traveled by land to Mexico or Canada; however, a significant portion—545,495, or about one quarter—were shipped to their destinations by sea or air. Evidence indicates that transport by sea is the most dangerous of these three modes. Ocean voyages cover many thousands of miles and can last for weeks or even months.

Press accounts and records received by AWI from the US Department of Agriculture via the Freedom of Information Act (FOIA) show that many of the long-distance exports from the United States are sent via sea if they involve large numbers of cattle, while exports involving smaller numbers of animals are often flown. According to FOIA records, in recent years, nearly all pigs, sheep, goats, and horses have left the country by air, while cattle have traveled by both sea and air.

Many countries import live farm animals from the United States; however, only a few bring in large numbers. The USDA’s Foreign Agricultural Service reports that over the last 12 years, the top five importers (apart from Canada and Mexico) were Russia, Turkey, the United Kingdom, the United Arab Emirates, and China (Figure 1). A pronounced spike in US exportation between 2010 and 2013 was likely due to a temporary demand, chiefly in Russia and Turkey, for the breeding animals necessary to grow their herds of dairy and beef cattle (Figure 2). Since then, the number of cattle being exported outside North America has declined, while exports of horses, sheep, goats, and rabbits have increased. 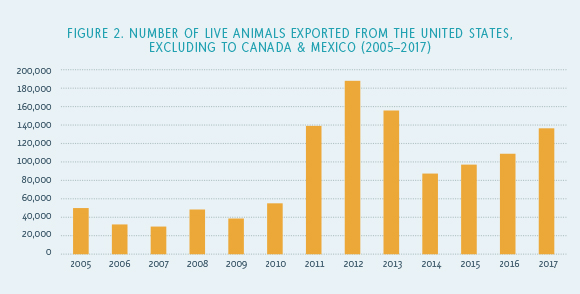 The Federal Meat Inspection Act (FMIA) specifies that all “cattle, sheep, swine, goats, horses, mules, and other equines intended and offered for export to foreign countries” must be inspected and deemed free from disease prior to their departure. This law allows the USDA secretary to prohibit or restrict the exportation of any livestock determined unfit for transport. Knowledge of this authority, along with several reports of animals shipped from the United States dying during arduous journeys overseas, was the basis for a 2011 rulemaking petition submitted by AWI and the World Society for the Protection of Animals (now World Animal Protection). The petition sought to amend the FMIA regulations to halt exports of animals who are too young, weak, or sick to travel. Four years later, APHIS proposed to overhaul its export regulations and add fitness to travel requirements—incorporating our proposal.

The final rule, which went into effect in February of 2016, has several additional animal welfare safeguards. The USDA adopted the World Organisation for Animal Health’s fitness-to-travel standards, which state that animals are unfit if they are unable to stand or bear weight on all four legs, are blind in both eyes, have unhealed wounds, are extremely young, or are pregnant and in the final stage of gestation. The amended regulations also require that ocean vessels (1) maintain a means of humanely euthanizing animals who become sick or injured during transport, (2) separate hostile animals, (3) have replacement parts for major life support systems in case of malfunction, and (4) submit a report after each journey with the number of animals who died and the number who became injured or sick during transport.

AWI has attempted to verify enforcement of the new rule by submitting FOIA requests to the USDA. For the period February 2016 through October 2017, AWI received records related to five shipments by sea (spanning five months, March–July 2017). The records raised concerns regarding two shipments in particular: (1) a voyage of unknown length to Sudan in which 27 deaths were recorded, resulting in a mortality rate of 1.8 percent and (2) a 41-day voyage to Turkey with 27 deaths and a mortality rate of 1 percent (Figure 3).

AWI has not determined whether there were in fact only five international shipments during the requested 20-month period, or the USDA simply neglected to send all relevant records. AWI has submitted additional requests to answer this question. Given the limited information received, the extent to which the new export rule is being enforced is unclear, though the reporting requirement has provided at least some mortality data where before there was none.

As it stands, the records indicate that the volume of animals being exported from the United States by sea is low. Although the mortality rate for two out of five journeys was concerning, no egregious incidents appear to have taken place in the wake of the 2016 amendments to the USDA’s live animal export regulations.