Washington, DC—The tide is turning in the West for captive marine mammals, yet live capture operations, traveling dolphin shows, polluted sea pens and needless deaths of animals continue to mar the captivity industry around the globe, especially in Asia, according to a report co-produced by the Animal Welfare Institute (AWI) and World Animal Protection (WAP). 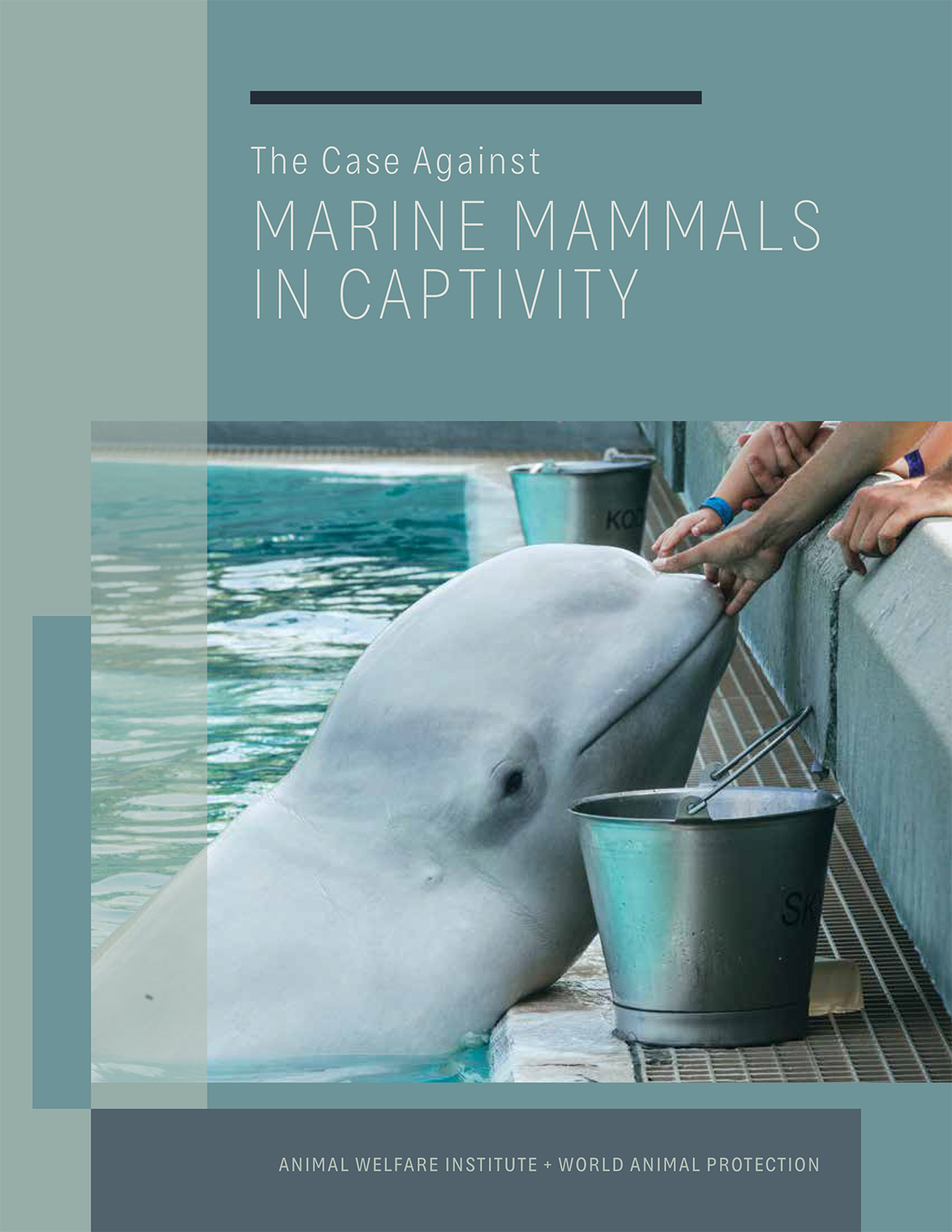 The fifth edition of “The Case Against Marine Mammals in Captivity,” released today at the ITB conference in Berlin, is meant to be a one-stop-shop for those who wish to learn why it is unacceptable to confine marine mammals for public display and entertainment. Citing robust scientific evidence and ethical arguments, the 156-page report delves into the behind-the-scenes realities of zoos, aquariums and marine theme parks that display these animals, which—despite the facilities’ assurances—do not provide essential or even accurate conservation or education resources. What’s more, marine mammals, with their aquatic ecology, suffer physical and mental health problems as a result of being confined in small enclosures. The lack of rigorous or extensive scientific assessment of captive marine mammal welfare at these operations is an issue of global concern.

The 5th edition of this report—first produced in 1995—is especially timely in light of the recent announcement by Dolphinaris Arizona that it would close its dolphin exhibit after four dolphins died there in less than 18 months. Since the publication of the last edition in 2009, the controversy over captive marine mammals has intensified, largely due to high-profile documentaries such as “The Cove” and “Blackfish,” ensuring that every new proposal to build a dolphinarium anywhere in the world will receive increased scrutiny and skepticism.

“A lifetime in captivity for marine mammals such as dolphins is so contrary to their natural environment—it is simply no life at all,” said Nick Stewart, global head of the campaign on captive wildlife tourism at World Animal Protection. “Tourists and the global travel industry provide demand for existing and new captive marine mammal facilities, which is why we have chosen to launch the report at one of the world’s biggest travel shows. The arguments and evidence of suffering are here in plain language for travel companies to see.”

Other highlights from the report:

The Animal Welfare Institute (www.awionline.org) is a nonprofit charitable organization founded in 1951 and dedicated to reducing animal suffering caused by people. AWI engages policymakers, scientists, industry, and the public to achieve better treatment of animals everywhere – in the laboratory, on the farm, in commerce, at home, and in the wild. Follow us on Facebook, Twitter and Instagram for updates and other important animal protection news.