Despite that public endorsement, the US House of Representatives is scheduled to vote on a bill next week that would amend the Marine Mammal Protection Act (MMPA) to allow for the killing of almost 1,000 sea lions a year. The Endangered Salmon and Fisheries Predation Prevention Act was introduced in the House by Reps. Jaime Herrera-Beutler (R-WA) and Kurt Schrader (D-OR), and in the Senate by Sen. James Risch (R-ID).

The bill would expand the scope of lethal management already in place at locations such as Bonneville Dam in Oregon, while removing virtually all oversight of this program. AWI vehemently opposes this bill, which misleadingly implies that killing sea lions will save endangered salmon, when the greatest threat facing the salmon is human-caused degradation of their spawning habitat.

“The American public overwhelmingly supports strong protections for the marine mammals that call US waters home,” said AWI’s marine mammal scientist, Dr. Naomi Rose. “Changing the core nature of the law to allow killing of sea lions for the crime of being sea lions—for taking advantage of dams and structures we put in the salmon’s way, making it easier for predators to catch them—is politically expedient but biologically indefensible.”

According to a survey of 1,000 adults, conducted in April by AWI and its allies, 83 percent of people favor protecting marine mammals against a host of threats, including commercial fishing gear, offshore oil and gas drilling, ocean pollution and ship strikes. That figure represents a 7 percent increase from the same poll conducted last year. In addition, 77 percent of respondents said they support the MMPA, up 4 percent from 2017. 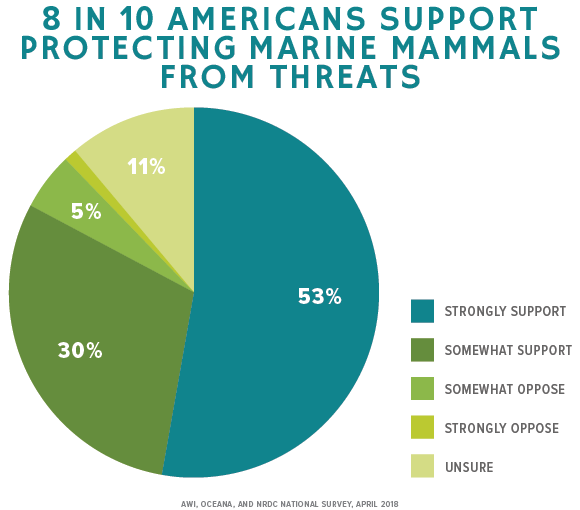 Since its founding, AWI has supported work by members of Congress to secure passage of legislation to improve the welfare of animals. In 1972, the nonprofit helped secure passage of the MMPA, a law that provides protections for all marine mammals in US waters—including whales, dolphins, seals, sea lions, polar bears, walruses and manatees—so that their populations can be restored and maintained at healthy and productive levels.

AWI has been working to get additional protections enacted for marine mammals in the 115th Congress. We have endorsed the Driftnet Modernization and Bycatch Reduction Act, a bipartisan bill—introduced in the Senate by Sens. Dianne Feinstein (D-CA), Shelley Moore Capito (R-WV) and Kamala Harris (D-CA) and in the House by Reps. Ted Lieu (D-CA) and Brian Fitzpatrick (R-PA)—that would phase out the use of large mesh driftnets in all US waters by 2020. Driftnets, stretching more than a mile long, are placed in the ocean to catch everything in their path, including swordfish and thresher sharks. However, the nets entangle dozens of other marine species, indiscriminately injuring and killing them. Most of these “bycatch” animals are discarded. 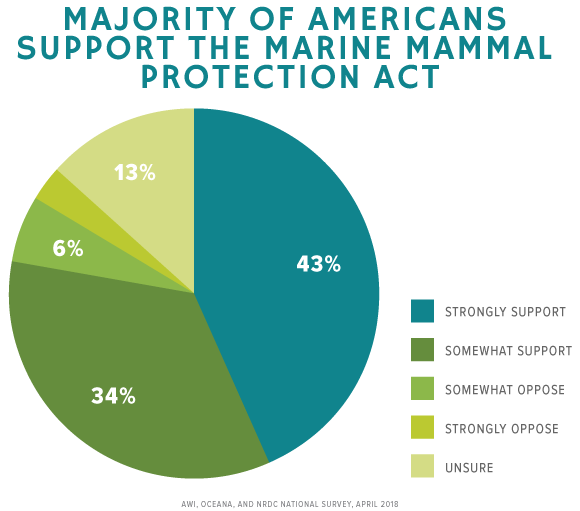