When Trying To Get Your Monkeys To Behave, Try Perches

Knowing how features of the environment, such as perches, might restrict or stimulate the expression of specified behaviors may help us to incorporate functional design alternatives in our housing plans for captive primates. Animal holding facilities and showcase facilities alike are commonly limited in the space available to resident primates such that the design of the vertical space may play a significant role in determining not only the comfort and quality of the housing, but also the appropriate physical place and social opportunity for animals to exhibit behavioral activity typical of the species. Hence, understanding how physical features of the environment are used by the resident monkeys to exhibit various behaviors may help us understand why primate behavior and activity vary between environments.

By studying groups of nonhuman primates in varied settings, insights have been made into the relationship between the environment and the animals' expression of species- typical behavior patterns (1,2,3,4). Thanks to behavioral research with nonhuman primates, differences in frequency ranges for both individual behaviors and overall animal activity levels have been shown between captive environments. For example, frequencies of the same behavior have been found to vary between a confined setting and a free-ranging setting (1, 5). Even in familial groups, adult rhesus monkeys show more social grooming and sexual posturing, as well as significantly less foraging and sleep, when they are confined indoors (5). Adolescent and juvenile rhesus monkeys show significant declines in foraging and locomotion while confined indoors (1), and dramatic changes in frequency of play for males (2), whereas infants show significant increases in passive behavior (1,5). During confinement indoors, tactile-oral exploration tends to increase significantly for all age- groups of rhesus (1). Likewise, sifakas housed outdoors are more active, spending less time resting and more time locomoting, feeding, and playing than when housed indoors (3). Clearly there are differences between the environments, but what elements of the environments have the most impact on changing behavior and activity patterns?

Young New World monkeys, Old World monkeys, and lemurs alike have been shown to profit from transfers into a larger and more diverse outdoor settings (1,2, 3,4,6). These findings have typically been discussed in general terms of differences in overall physical and social opportunity relative to spatial restrictions. But is it the increase in space or are other factors at work? Data is needed that identifies more specifically which environmental features might be responsible for the animal's behavioral and activity changes (6,7).

When provided with multiple levels of perches, it has been shown that squirrel monkeys utilize all levels, enhancing cage space for improved group holding capacity (8). In order to determine how multiple elevated areas (perches) are utilized relative to various behaviors by our group of 26 rhesus monkeys the following study was conducted. Twelve species-specific behaviors were selected and data were collected to indicate each subjects' vertical elevation during the behavior. Three elevation locations along the vertical plane were established.

All data were collected within a five-acre indoor-outdoor compound with a centralized shelter area (Figure 1). 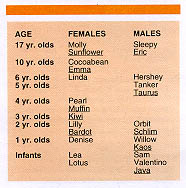 Data collection included twelve behaviors (passive, sleep, eat, forage, social play, self play, locomotion, self groom, social groom, tactile/oral, vocal/facial, sex; Table not scanned), and three categories of elevation (High perch: 175 cm or higher from ground; Mid-level perch: higher than 40 cm but lower than 175 cm from ground; Low perch: less than 40 cm including ground level; Table not scanned). These data were collected concurrently via a scan sampling method (10) . Scan scoring sessions took place from March until January. The average number of troop scans per day was 9.8. The shelter buildings were considered as one location. Scans were recorded from 0900 hours to 1200 hours (814 total scans) and from 1500 hours and 1800 (591 total scans) hours. All location categories were mutually exclusive. For each subject, except newborns (Two infants were born following the onset of the study and served as subjects in fewer scoring sessions.), a total of 814 morning and 591 evening scans were recorded.

The attractiveness of high and mid-level perches for eight of the twelve behaviors studied is apparent. Higher perching elevations appear to be a very desirable feature in this environment for the expression of six of the twelve behaviors studied. Mid-level perches, on the other hand, were utilized more for only two of the behaviors: self play and eating of provisioned foods. And, ground level was the location selected most often for only locomotion and foraging, behaviors which are more limited to the ground in this setting. It appears that the use of different perch elevations for different behaviors may not be random, as was suggested in the squirrel monkey paper.

Present findings indicate that some elevations are more appropriate or inviting than others for expression of specific behaviors. Creating cage environments with multiple elevations for perch sites may not only reduce population density for captive groups of monkeys as described by Williams et. al., but may also offer animals necessary alternatives, stimulate activity, and facilitate the expression of species-typical behaviors in a well- provisioned captive environment.

Thanks must also be extended to Christopher Price, Peter Klinkhamer, and Weipko Oosterhuis for their significant time spent in the field collecting data and to Edward George for building the perches.

Spring 1994 IN TOUCH
This article was reproduced with permission of the publisher.