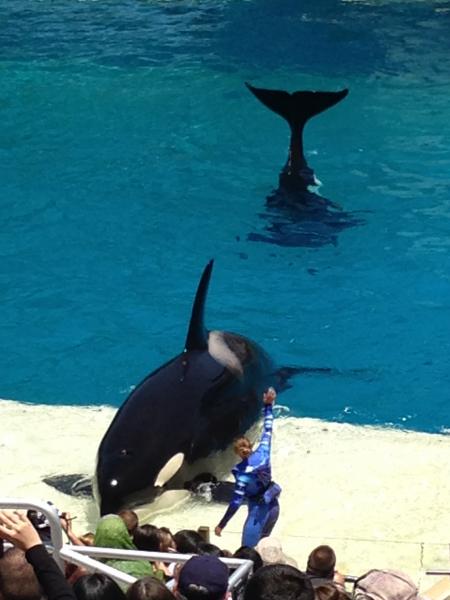 Today’s statement by Virgin that it intends to continue to work with aquariums that confine whales and dolphins (cetaceans) in captivity for public entertainment has disappointed wildlife experts from leading animal welfare and conservation charities.

Days after Whale and Dolphin Conservation (WDC) launched a campaign on February 25, 2014, calling on Virgin Holidays to stop the sale of trips to places like SeaWorld, Sir Richard Branson announced that he was going to ask his supply chain (including marine parks) to take a pledge to no longer source cetaceans from the wild to stock captive facilities. He then called a meeting in June with a variety of stakeholders, including WDC, Born Free Foundation, the Animal Welfare Institute, the Orca Research Trust and the World Cetacean Alliance, as well as representatives from marine parks, to discuss all aspects of the keeping of cetaceans in captivity, what the future might look like and how the pledge would be implemented at the end of September.

“We are disappointed that Virgin, having taken the initial steps to address the important issue of captive cetaceans, has not shown the leadership needed to help end this form of captive animal exploitation and suffering. Despite the fact that we spent two days with members of Virgin’s corporate team, explained our position, and sought their support for a new, more compassionate future for whales and dolphins, it seems that our efforts have not resulted in further progress. Virgin has missed a visionary opportunity.

Virgin, reaffirming its original pledge issued in February 2014, stated that it will no longer do business with individual suppliers that do not sign the pledge, thereby agreeing not to acquire dolphins directly from the wild on or after February 14, 2014. However, the pledge does not require the termination of captive breeding programs, and makes allowances for acquisition from the wild for rescue, emergency relocation, or species conservation purposes.

Although the pledge is a step in the right direction, we expected more from the Virgin stakeholder process, and we are calling on Virgin to return to the table to discuss key future actions including a commitment to (1) work with suppliers to end shows and captive breeding programs within a specified timeframe, (2) prohibit breeding or display as part of rescue or rehabilitation programs, and (3) help develop sanctuaries or other alternative display environments that ultimately improve the quality of life for captives that may never be returned to the wild. To truly inhibit the capture of wild cetaceans for dolphinariums, it is also imperative that Virgin refuse to do business with any facility that continues to acquire dolphins or whales from the wild or any facility that trades with companies that acquire whales or dolphins from the wild. These additional steps would move us closer to the complete cessation of the devastating capture, trade, and confinement of whales and dolphins for commercial purposes, and refocus efforts toward addressing the myriad challenging conservation issues facing whales and dolphins in the wild.

It now seems that Virgin, so often a leader on contemporary issues, is out of step with the tide of public opinion. The recent documentary   Blackfish  , which exposed many truths behind the captivity industry, has inspired millions of people to say no to whale and dolphin shows. SeaWorld, the company principally featured in the film and an invitee to Virgin’s stakeholder process, has conceded that a significant drop in both attendance figures and revenue has been a direct result of the adverse publicity.

Virgin unfortunately has yet to come to the same conclusion as ourselves following six months of consultation in which we all fully participated. Both Virgin and Sir Richard pride themselves on leadership and innovation in the travel industry. Their decision to go with the status quo and essentially support "business as usual" from their suppliers in the captive cetacean industry reflects neither of these attributes. It also undermines Sir Richard’s image as an Ocean Elder and advocate for marine conservation.

The public’s attitude towards captive whales and dolphins as entertainment is changing rapidly. We believe that Virgin and the wider travel industry will find it more and more difficult to support SeaWorld and other dolphinariums as people increasingly turn their backs on these public display facilities. Virgin’s decision not to take bolder steps is especially inconsistent with the recent dramatic drop in SeaWorld’s stock price, an indication that the market is beginning to reflect these public concerns.

Virgin is a member of ABTA, the UK Travel Association, which has formulated detailed guidelines relating to the use and treatment of animals by the tourism industry. Were these guidelines to be fully implemented, it would hasten the end of the exploitation of captive dolphins and whales in public display facilities and aquariums. It would also compel the travel industry itself to seek new, more compassionate, and more progressive business opportunities for connecting people with the natural world and enhancing its protection. Such guidelines, among others, include the requirement that captive environments should be stimulating and enriching, encouraging natural behavior; that dolphins and whales should only be housed in social structures similar to those in the wild; and that handling and contact by the public should be discouraged.

It has yet to be shown how Virgin’s pledge will be reconciled with these guidelines or whether they will be implemented by Virgin’s supply chain.

We view Virgin's current position as a small step in the right direction and we expect other tour operators to make similar or greater commitments in the coming months. Virgin and the wider travel industry are now well aware that there is much more that must be done to protect whales and dolphins from the deprivation imposed by captive entertainment facilities. We strongly urge Sir Richard Branson and Virgin to be at the forefront of this change. We are ready to help.

This statement has been released by the following organizations: