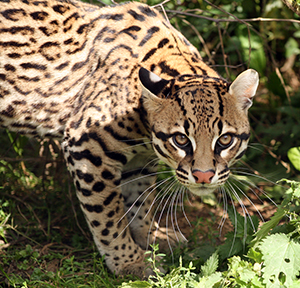 Wildlife groups announce plans to sue to protect the rare cat from unlawful snares and traps.

Tucson, AZ—Today, the Animal Welfare Institute (AWI) and WildEarth Guardians (Guardians), represented by the Western Environmental Law Center (WELC), notified the United States Department of Agriculture’s (USDA) Wildlife Services program of their intent to sue over the program’s failure to ensure that it is not harming ocelots, which are listed as an endangered species under the federal Endangered Species Act (ESA).

The potentially harmful effects of Wildlife Service’s lethal wildlife management activities on the endangered ocelot trigger a requirement that the program consult with the US Fish and Wildlife Service (FWS). The program failed to do so, violating the ESA.

“Wildlife Services routinely fails to comply with federal laws like the Endangered Species Act,” said Tara Zuardo, wildlife attorney with AWI. “Few ocelots remain in the United States and they require basic protection to ensure that they are not killed by the devices—such as steel-jaw leghold traps and cyanide capsules—Wildlife Services indiscriminately uses on public lands to kill wildlife.”

Ocelots were listed as endangered under the ESA in 1982. Historically, the small, secretive cats inhabited southeastern Arizona and the southern Rio Grande Plain in Texas. Although once thought extirpated from Arizona, multiple ocelot sightings occurred between 2009 and 2012. In April 2014, a remote camera detected a lone male ocelot in the Santa Rita Mountains, southeast of Tucson, confirming that the rare species is roaming the area. Ocelots are extremely vulnerable, threatened by habitat fragmentation, trapping, roads, development, and capture for the pet trade.

Wildlife Services is a relatively unknown USDA program, responsible for the deaths of millions of wild animals each year under the auspices of wildlife damage management. The use of lethal, indiscriminate techniques to remove carnivores in and near areas where ocelots are living—including blind sets, baited and scented traps, draw stations, snares, and M-44 cyanide capsule ejectors—puts the endangered ocelot at risk of death or injury. With as few as two ocelots in Arizona, the death or injury of just one of the cats represents a major threat to the species’ survival. In violation of federal law, Wildlife Services has never consulted with FWS about the impact of its activities in ocelot habitat in southern Arizona.

“Wildlife Services is not above the law,” said Drew Kerr, carnivore advocate with WildEarth Guardians. “The law requires that Wildlife Services ensure its activities do not further endanger critically imperiled wildlife like the extremely rare ocelot.”

Congress’ fundamental purpose in passing the ESA was to protect species on the brink of extinction and the ecosystems upon which they depend for survival and recovery. To help accomplish this mission, the law requires federal agencies to consult with federal wildlife biologists to ensure that their activities do not jeopardize the continued existence of a listed species or adversely modify a listed species’ critical habitat.

“It’s exciting that the ocelot, a nearly extinct species, is returning to its historic Arizona habitat. But Wildlife Services’ continued use of lethal, indiscriminate management techniques in the ocelot’s habitat runs the unacceptable risk of killing one of the few returning cats,” said John Mellgren, an attorney with WELC who is representing the groups. “We are simply asking that Wildlife Services comply with the law and consult with the federal biologists to ensure that its activities do not pose a danger to the cats.”