SUMMARY
A training technique is described for ensuring the active cooperation of adult male rhesus monkeys (Macaca mulatta) during in-homecage venipuncture. Five single-housed and 10 pair-housed males (average age 8 years) were the subjects of the study. On average, 13 training sessions (range 2-26) were necessary to get a male to voluntarily present a leg in a specially designed opening of the door and to display no resistance during venipuncture. Total time spent with a male until he presented a leg ranged from 16 to 74 minutes, with an average of 40 minutes.

Neither the trainer nor the animals received any injuries during the training. Once trained, all males cooperated during in-homecage venipuncture not only with the trainer but also with the attending caretakers. One to two minutes were required to draw a blood sample.

It was concluded that training adult male rhesus monkeys to actively cooperate during in-
homecage venipuncture increases the scientific value of research by reducing undue distress
reactions associated with immobilisation. Since the animals cooperate rather than resist, in- homecage venipuncture also minirnises the risk of injury.


INTRODUCTION
Venipuncture is one of the most common handling procedures to which laboratory rhesus monkeys are subjected. Usually, an animal is immobilisedin its home cage or in a special squeeze-apparatus on this occasion. The monkey suffers considerable distress in either case. The situation is particularly unsatisfactory when blood needs to be drawn from adult males. Because sharp canines make males potentially more dangerous than females, they are more forcefully immobilised. Males are also heavier than females, and carrying a 10 kg male in a 6 kg transport box from his cage to another room and back constitutes considerable strain on a person's lower back, particularly when the animal is housed in an upper-row cage.

The training technique for caged females has been adapted to adult male rhesus monkeys in the present study.


METHODS
Fifteen male rhesus monkeys (Macaca mulatta) with an average age of 8.2±2.7 years (Table 1) were the subjects of this study. Ten animals were housed in 5 compatible pairs in 85 x 170 x 85cm stainless steel double cages. Each cage was divided by a privacy panel (Figure 1 ). A squeeze-back was installed in one half of the cage (Figure 1 ). 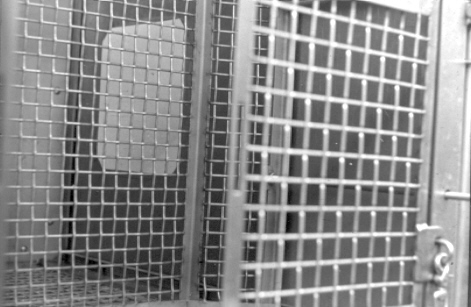 FIGURE 1 The double cages for paired males were provided with a privacy panel.
A squeeze-back was installed in one half of the cage. An animal could be trapped in
this section by pulling the squeeze-back past the passage hole of the privacy panel.

An animal could be trapped in the squeeze-back division of the cage by pulling the squeeze-back past the passage hole of the privacy panel. The other companion was free to pass from one half to the other half of the cage in this situation. Five animals were kept singly in 85 x 85 x 85 cm stainless steel cages with squeeze-backs. All animals had lived in their cages for more than one year but had never been restrained with the squeeze-back devices. Each single cage and each squeeze-back-half of the double cages was equipped with a sturdy sliding Plexiglass panel fitting over the cage opening. The panel had a smooth- edged opening (28 cm high and 8 cm wide) that was large enough for a monkey's leg to be extended out of the cage, but small enough to prevent the monkey from escaping (Figure 2).

All subjects were familiar with the author and took favoured food from his hands.

Training sessions started by cautiously pulling the squeeze-back. This was followed by opening the door while sliding the Plexiglass panel over the opening. A snap hook, attached to the front of the cage, prevented the panel from being pushed too far out of its place (Figure 2.) 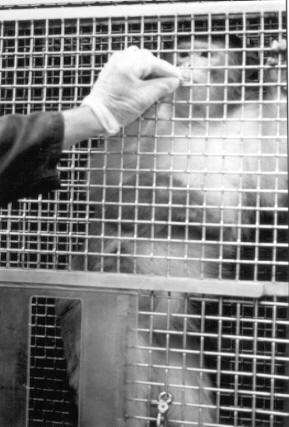 FIGURE 2 A snap hook, attached to the front of the cage, prevented the Plexiglass panel
from being pushed too far out of its place.
Here, Hershey is squeezed during one of the inititial sessions
and shows no resistance to saphenous venipuncture.
Note that the monkey is not immobilised although its freedom of movement is considerably restricted.

The monkeys were trained with strict consistency, and under no circumstances were training sessions terminated before the subject's leg was successfully pulled out of the cage for 1 minute. Once this was achieved the animal was released, the squeeze-back pushed back, and the animal rewarded with favoured food (Figure 3). 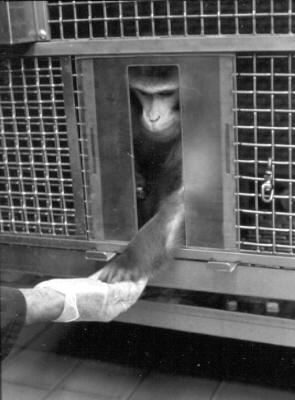 FIGURE 3 Hershey is rewarded for his good cooperation.

Paired males were trained with one partner being restrained and the other partner having free access to the rear portion of the squeeze-back cage. Partners were thus able to keep visual contact with each other during training procedures.

A male was considered to cooperate when he actively presented one of his legs in the opening of the Plexiglass panel (Figure 4 ), and showed no noticeable resistance to having his leg pulled out of the opening and a blood sample taken (Figure 5). 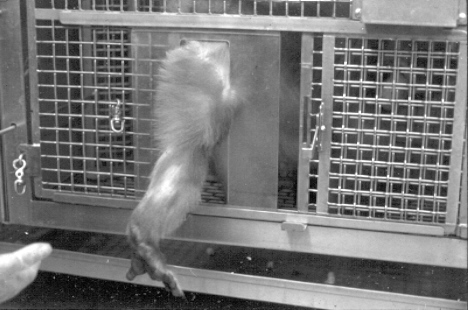 FIGURE 4 Active cooperation during in-homecage venipuncture. Here Twist actively
presents a leg for venipuncture. Note that the monkey is restrained with the help of the
squeeze-back but has room enough to move around comfortably. 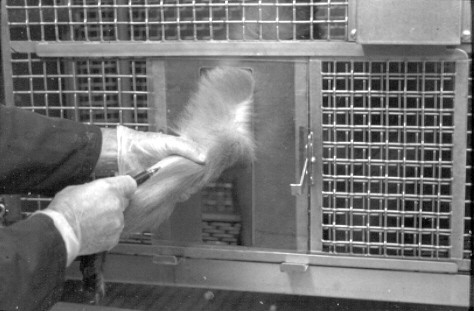 FIGURE 5 Twist shows no noticeable resistance ot having his leg pulled out
of the cage and a blood sample taken.

RESULTS
The time required for pulling a male's leg out of the opening in the Plexiglass panel for the first time ranged from 1 to 13 minutes, with an average of 4.6±4.1 minutes. Five males remained standing when squeezed, which made their legs easily accessible to the trainer. Ten males sat down when they were squeezed for the first few times; it was necessary to lift them up to their feet and then grasp a leg. After a few sessions, all of the animals had learned that they were expected to stand during the training. Initially, the males resisted being touched by repeatedly changing their position (all 15 animals), by trying to reach back and slap (4 animals), or by trying to jerk the head back and bite the trainer (1 animal). Once the training session was over, however, favoured food was accepted as a reward by all animals. On average, 24.1±18.3 minutes (Table 1) distributed over 5.8±4.8 training sessions were required to overcome the males' resistance to having a leg pulled out of the cage and a blood sample taken. Thereafter the animals were no longer squeezed but merely restrained.

The number of sessions required to get a male to actively present a leg behind or through the opening in the Plexiglass panel and to display no resistance during venipuncture ranged from 2 to 26 with an average of 13.1±6.9. Total time spent with an animal until he presented a leg ranged from 16 to 74 minutes with an average of 40.4±18.8 minutes (Table 1). Mean duration per training session was thus 40.4 min./13.1 = 3.1 minutes. Training sessions were distributed over a period of 2 to 16 days.

Neither the trainer nor the animals received any injuries during the training.

Once trained, all males cooperated during in-homecage venipuncture not only with the trainer but also with the attending caretakers. It took 1 to 2 minutes from entering an animal room to the completion of blood collection. 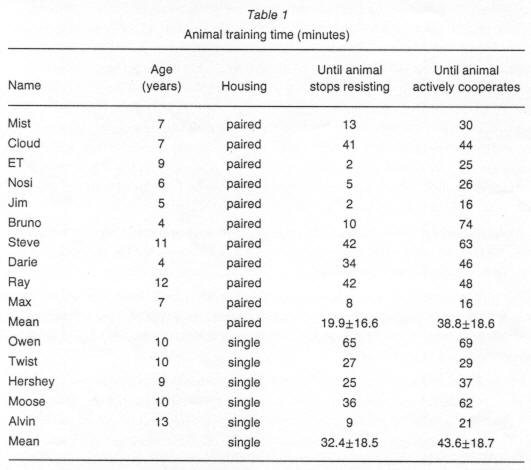 DISCUSSION
Consistency and positive reinforcement were the key elements of the in-homecage training program both for females and for males. The training of females, however, differed from that of the males because females were gradually habituated to being restrained and to being touched before an attempt was made to grasp a leg1. Altogether 31 minutes of habituation and training were necessary until a female no longer displayed signs of resistance to having a leg gently pulled through the cage door and a blood sample taken1. The trained animals showed no significant cortisol response to venipuncture, indicating that they experienced no distress2. The present study with males suggests that special habituation to being restrained and touched is not crucial for the success of training. The males had a leg pulled out of the cage on the first day of training. They showed no resistance to venipuncture after 24 minutes of training. Unlike the situation with females, the criterion of success with males was not merely the absence of resistance but active cooperation by presenting a leg for venipuncture. This was a safeguard against accidents.

The present report clearly indicates that training adult male rhesus monkeys to actively cooperate during in-homecage venipuncture is a simple yet rewarding undertaking. The average investment of 40 minutes per male is negligible and pays off in several ways:

1. The animal is not unnecessarily distressed by being immobilised in its cage, or by being removed from its familiar homecage and immobilised on a table or in a restraint apparatus for the simple procedure of venipuncture. Working with nonresisting experimental rhesus monkeys in their familiar environment increases the scientific value of the research conducted on such animals by eliminating data-confounding reactions caused by fear and/or resistance.
2. The animal caretaker and the animal cooperate with each other. This increases the safety of interactions because the monkey no longer needs to be forcefully subdued and hence is no longer unpredictable and ready to defend itself by biting and scratching whenever it can.
3. The animal can easily be handled by one caretaker, whereas conventional blood-collection techniques usually require two or three caretakers to control the resisting monkey.

It must be emphasised that the training method described in this paper demands excellent professional skills. Working with adult male macaques in cooperative ways requires a trustful relationship between the caretaker and her/his animals. It would be irresponsible to have a fearful, impatient, or brutal person draw blood from a trained adult rhesus monkey. Such a person would be at high risk because of the animal's potentially injurious defensive reactions.

Acknowledgements
I am grateful to my wife Annie and Dr. Dan Houser for providing constructive comments on this manuscript and to Mrs. Jackie Kinney and Mr. John Wolf for editing it. Special thanks are due to Mr. Bob Dodsworth for preparing the photographs for the figures. The in-homecage venipuncture training program is supported by NIH grant RR-00167 to the Wisconsin Regional Primate Research Centre.