In a laboratory setting, it is often desirable to house small to medium sized nonhuman primate species in social groups, but the expense and space requirements of either purchasing new cage units or reconfiguring room settings make social housing impractical. In our laboratory in Aberdeen, Scotland, we conducted a series of experiments which required frequent or daily removal or access to individual' animals for limited time periods. Since these animals had been housed with social units for several years in indoor/outdoor enclosures we were reluctant to disrupt the social organization of the groups for our experiments. As a compromise we moved the animals into rooms with standard four cage units which had been modified to allow rapid access to individuals yet maintenance of the animals in their original social groups of six to ten individuals. The purpose of this brief note is to describe the cage modification we developed at Aberdeen.

We used laboratory cages which were mounted in groups of four on cage racks, but any style and size of laboratory cage with guillotine or side sliding front doors can be used. These cages were converted to housing for social groups through the addition of connecting mesh tunnels and sliding cage wall partitions. The connecting tunnels (see Fig. 1) were readily constructed in our university shop from commercially available 2" x 1" stainless steel hardware cloth. Sheets of the hardware cloth were cut so that the end openings of the tunnels matched the width and height dimensions of the guillotine door openings on the cages.

The overall length of the tunnel was determined by the distance between the doors on adjacent cages plus the distance necessary to create a right angle turn in the tunnel for attachment to the door openings. The mesh was bent by hand into shape, the cut ends smoothed, and the overlapping mesh ends secured using stainless steel clamps. Aluminum (or stainless steel) reinforcing strips with hook cut-outs were welded to the top and bottom ends of the tunnel openings. These hook cut-outs fit smoothly over the rods or railings which supported the cage doors without impeding door movement.

For additional space per caging unit in our side-by-side rack-supported cages, we installed sliding doors over openings cut into the adjacent side walls of the cages. Using this inexpensive modification and simple fabrication, four cage commercial rack-supported systems were extended to house a small colony through the addition of one or two vertical spanning tunnels and the modification of four adjacent cage side walls through replacement with sliding removable panels (see Fig. 2). Standard commercially available stainless steel trays were attached below the tunnel extensions to collect debris.

These tunnels can be constructed to link doors horizontally or vertically. Combinations of straight and bent tunnels can be linked together to move groups of animals to new caging units when the existing colony units are sanitized or to link an interior cage unit to an outdoor run. The tunnel units readily lift off the cage door supports and thereby allow rapid access to individual animals which can be isolated in one cage of a unit through insertion of the sliding side panels. Similar to the short tunnels described by Moor-Jankowski and Mahoney [5] for use with chimpanzees, the primatrail units can also be used to provide short-term access between two individually housed monkeys for socialization. Like the commercially available Habitrail (Habitrail, Inc., Irvington, NJ, USA), which has virtually unlimited possibilities through system extension for housing gerbils and small rodents, the addition of horizontally and vertically oriented tunnel connectors and strategically placed removable side wall panels allows large and virtually unlimited configurations of standard laboratory cages to be connected to form a complex unit for social housing of nonhuman primates.

This type of cage modification has several advantages. First, it can readily revert to standard single cage units and thus does not deplete caging supply. Second, since it uses standard cages, racks, and removable tunnels, all parts of the system can be rapidly dismantled and put through a cage washer for sanitization. Third, in addition to increasing the volume of space available to the animals, this system also provides a complex of climbing, running, jumping, and swinging spaces, which allows exercise and more varied social interactions. We have added metal trapezes which can be slid along rod supports from the front to the back of each cage and have introduced a wide variety of "toys" which hung down into the vertical tunnels suspended on chains attached to the tunnel tops. Additional trapezes and vertically hanging plastic or stainless steel large link chains have also been suspended in the tunnels as items for swinging and play, A fourth advantage is that through removable side panels individual animals can be temporarily isolated from physical contact with the social group if warranted due to illness, injury, etc., yet remain in visual and olfactory contact. If the side wall modification is done by constructing panel doorways rather than removing the entire side wall of the cages, an increased number of spaces are also provided where animals may visually escape from one another or attain increased social distance in times of social stress.

We housed groups of squirrel monkeys (Saimiri sciureus sciureus) [7] in small breeding units of four adult females with two adult males for five years with a high rate of reproductive success: averaging 0.6 live births per female reproductive year for 16 females over the five-year period. As has been reported for other captive colonies of Gothic arch monkeys, we observed males and females interacting and huddling together throughout the year [4]. During the birth season the two adult males in each group would exhibit more spatial separation during the daytime by huddling, sitting, and moving together, separated by at least one tunnel from the mother/infant cluster. With more than one breeding colony per room, adult males often engaged in genital displays [3] and other visual or vocal displays [2,6] between colonies which increased during breeding season when the males were "fatted" [1].

In conclusion, through inexpensive cage modification and fabrication of removable primatrail tunnels, standard rack- or wall-supported laboratory cages can be used for housing small nonhuman primates in social groups on a short- or long-term basis. The primatrail system described in this paper provides a complex social space yet allows rapid removal of individual animals and easy cleaning of all system parts. This system has been used by a number of institutions since 1976 for housing several New World species and rhesus macaques. The second author can be contacted for further information about details of use and construction. 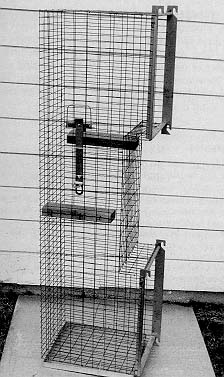 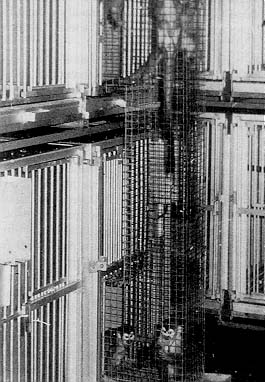 This article originally appeared in the Journal of Medical Primatology 20, 94-96 (1991).
Reprinted with permission of the Editor.