Social disposition: Like human primates, nonhuman primates have an inherent need for companionship. Prolonged social deprivation may lead to depression (Figure 1) and gross behavioral disorders such as self-biting and self-clasping. 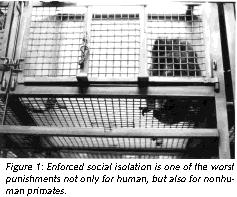 Semi-arboreal lifestyle: All species, even those who spend much of the day on the ground (e.g., baboons, guenons) seek trees or other elevated structures as refuges from predators and as safe resting sites for the night. In the wild, the presence of large trees may be the only limitation for the distribution of primates. A lack of vertical escape routes in situations of danger induces anxiety and fear (the animal is quasi-cornered) manifesting themselves in hyperactivity, depression and/or hyperaggression.

Complex living environment: Primates are physiologically and anatomically adapted to live in a complex, dynamic environment which keeps them busy most of the time. A primate who is forced to continuously live in a boring, i.e., understimulating environment becomes apathetic or restless and may resort to stereotypical substitute activities.

Intelligence: The biological adaptation of primates to an ever-challenging environment is coupled with a high degree of intelligence.

Sensitivity to distress: Individuals show measurable changes in normal physiology and behavior when exposed to fear-inducing situations over which they have no control (Figure 2). 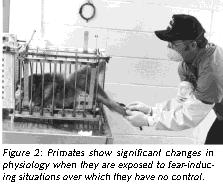 There are simple and inexpensive ways to address these five basic characteristics in order to provide the animals with species-adequate housing and handling conditions in the research laboratory setting. In the wild, Old World primates live in coherent troops. Housing them in groups rather than in single cages is therefore the ideal way to account for their social disposition (Figure 3). 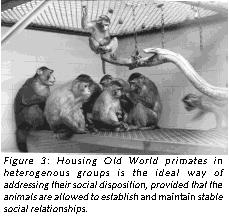 The risk of aggression, however, is significant when new groups are formed from previously single-caged animals. The risk of aggression remains high even in established groups because of the spatial limitations set by confinement and because of the special limitations set by confinement and the artificial instability of social relationships resulting from research and managerial stipulations (e.g., removal of individuals for experimental surgery, genetically matched breeding, terminal studies).

Pair-housing offers a safe and practicable alternative to group-housing. Successful pair-housing of previously single-caged individuals has been documented for numerous species, including chimpanzees (Fritz and Fritz 1979), baboons (Jerome and Szostak 1987), longtailed macaques (Line et al 1990; Lynch 1996; Figure 4) and stumptailed macaques (Reinhardt 1994; Figure 5). Even male rhesus macaques, who are commonly believed to be particularly aggressive and hence unsuitable for social-housing, can be transferred without special risk from single-housing to permanent pair-housing arrangements if partners are given the chance to establish their dominance-subordination relationship during a brief non-contact familiarization period (Reinhardt 1989; Figure 6). 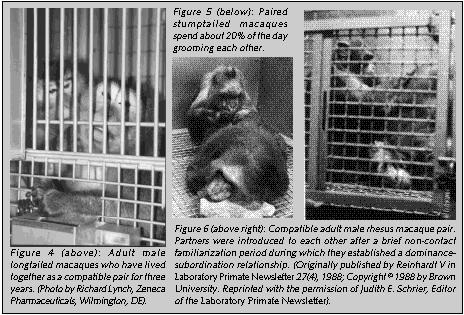 Companions spend approximately the same amount of time interacting with each other as wild animals do. This suggests that being transferred from single- to permanent pair-housing improves the animals' behavioral health by providing them with an appropriate environment for the expression of their social disposition. Individuals exhibiting behavioral disorders in the single-housing condition tend to abandon their peculiar habits once they are allowed to live with a compatible conspecific.

Pairs need twice the minimum floor area space as the single-caged individual to allow them to show aggression-buffering distancing behaviors during situations of conflict. According to the Animal Welfare Act (US Department of Agriculture 1991), pair-housed primates require the following minimum horizontal floor area if both partners belong to the same body weight class:

A spacious enclosure will not address the semi-arboreal lifestyle of Old World primates if no provision is made to have the vertical dimension of the cage accessible. The installation of elevated structures such as shelves, platforms, perches, ladders and swings allows the animals to retreat to safe and dry locations above the ground and does not restrict them to an unnatural, permanent terrestrial life style (Figure 7). An adequate number and an adequate total surface of elevated structures must be provided for group-housed and pair-housed animals to avoid competition over access.

Structural enhancement of the vertical dimension is particularly important for animals that are confined to lower-row cages, and hence forced to continuously live close to the ground in the shade of upper-row cages. These individuals have a definitive disadvantage in comparison with those living in relatively bright upper-row cages (Figure 8). 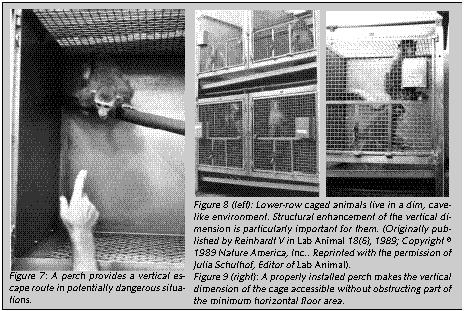 Ideally, primates should not be kept in stacked cages, but all cages should extend fully from floor to ceiling of the room thus taking maximum advantage of the space and light available and allowing the installation of several climbing and resting surfaces at different height levels. These conditions are usually met when the animals are kept in groups. When they are kept in cages, however, minimum legal height dimensions are often insufficient to allow the proper placement of elevated structures. It would defeat the purpose of environmental enrichment if a shelf or branch promotes species-typical perching but obstructs part of the minimum floor area necessary for the occupant to freely turn around and to freely change his/her position.

Cages for nonbrachiating Old World primates, such as macaques, baboons and guenons should have the following minimum heights to allow for the proper installation of at least one elevated structure per occupant:

For brachiating species, such as orangutans and chimpanzees, more height may be required so that an animal can, when fully extended, swing from the cage ceiling without having the feet touch the floor.

The installation of elevated structures not only increases the usable cage volume by making the vertical dimension accessible but it also increases the complexity of the living environment by stimulating the animals to spend a major portion of their time engaged in species-typical arboreal activities such as climbing, leaping, balancing, swinging, perching and looking-out (Figure 9). Elevated structures, unlike toy objects, retain their environment-enriching quality over time because they trigger species-typical behaviors that would be crucial for the animals' survival in the wild.

Emulating the gathering and processing aspects of natural feeding is another effective strategy to counteract boredom in the captive environment where plenty of processed food is freely available. Understimulated animals will readily work for food in the presence of freely accessible food. This indicates that the gathering and processing of food are rewarding experiences for them independent of caloric intake.

Produce of the season, such as carrots, corn (Figure 10), peanuts, apples, melons, pumpkins and foliated branches promote processing behavior if they are offered whole rather than husked, cracked, pealed, chopped or stripped. Such food items should be fed daily not only as a means of behavioral enrichment but also as a valuable supplement to the ordinary biscuit ration. 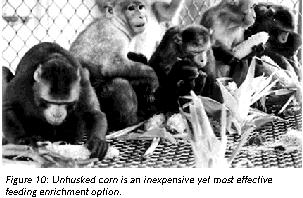 Processing behaviors are also triggered by inexpensive destructible objects such as branch segments (Figure 11) or cardboard boxes. Constantly changing their form and texture due to wear, such items have a long-lasting stimulatory value regardless of the fact that they are inedible. 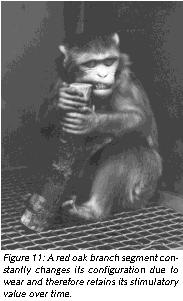 Housing primates on woodchip deep-litter rather than on the bare floor not only reduces the overall workload for cleaning while improving the hygienic conditions but it also allows the animals to engage in prolonged food gathering activities if seeds, grain or nuts are scattered on the woodchips (Figure 12; Chamove et al 1982). 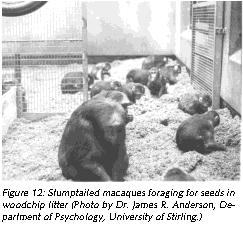 Turf or fleece boards sprinkled with titbits provide an alternative foraging substrate for animals that are housed in cages with mesh floors (Figure 13). 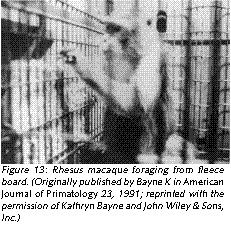 Food puzzles, food dispensers and probe feeders can easily be constructed from PVC pipes or tubes. They are loaded with treats, and great dexterity and perseverance are required to obtain them. Chimpanzees and orangutans will fabricate tools from branches or twigs to extract nutritious material from such devices.

Placing the food on the chain-link or mesh ceiling of the enclosure rather than in feeder boxes or on the floor is perhaps the simplest yet one of the most effective ways to promote foraging behavior for standard food such as biscuits and fruit (Figure 14). This feeding enrichment technique requires no extra personnel time and no extra material. It also keeps the floor clean from spoiled food, because the animals only work for food that they actually eat. Macaques increase their foraging time more than 50-fold when their daily standard biscuit ration is placed on the mesh ceiling of their cage rather than in ordinary feeder boxes. The same effect can be achieved when the feeder box is remounted a few centimeters away from its access hole. Dexterity is now required to maneuver the biscuits through the mesh covering the face of the box (Figure 15).

Environmental complexity can also be enhanced by training Old World primates to co-operate during common husbandry and handling procedures. The intelligence of the animals makes such an endeavor a rewarding experience for any animal careperson or animal technician who feels uncomfortable with the traditional handling procedures, which usually imply that the animal is forcefully immobilized.

Training nonhuman primates to cooperate rather than to resist during handling challenges the animals' intelligence, offers them - and the caregivers - some meaningful distraction, eliminates undue distress responses, and avoids possibly dangerous defensive reactions triggered by fear. With gentle firmness and patience, Old World primates can easily be conditioned to cooperate during common procedures such as capture from home-cage, capture from group, blood collection (Figures 16 and 17), systemic (Figure 18), topical (Figure 19), and oral drug application, urine collection and veterinary examination (Reinhardt et al 1995). Working with rather than struggling against the handling personnel gives the animal subject some control over the interaction and makes enforced immobilization superfluous (Figures 16-19).

Providing Old World nonhuman primates in research institutions species-adequate housing and handling conditions is not sentimentalism. On the contrary, it is realistic to employ such refined scientific methodology. A monkey who behaves like a monkey and who is free of distress is undoubtedly a more reliable research model than one who is a behavioral cripple as a result of understimulation, and who experiences distress whenever he or she has to be handled.

I am very grateful to Doug Cowley, Steve Eisele and Russell Vertein from the Wisconsin Regional Primate Research Center for their guidance and assistance. Their empathy and silent commitment to more species-appropriate housing and more humane handling of the animals in their charge was a great inspiration for me. I am also grateful to John Barnes and Cathy Liss for their very helpful comments on this manuscript.