It was concluded that laboratory rhesus macaques prefer the vertical dimension over the horizontal dimension as primary living space. Access to vertical space was apparently essential for the well-being of the animals. Space requirements should therefore not merely define minimum floor area and minimum height but should explicitly stipulate that the vertical dimension of the enclosure must be adequately structured to make it an accessible living space for the animal(s).

Space requirements for captive nonhuman primates are usually expressed as minimum floor area and minimum height. These requirements prescribe a minimum enclosure volume but do not stipulate that it must be accessible to the confined animal(s). A cage may meet the minimum space requirements, yet not provide sufficient space if its vertical dimension is not accessible. Most nonhuman primates are biologically adapted to an arboreal life style1 and access to the vertical dimension of their living space is presumably of equal if not even greater importance than access to the horizontal dimension.

The present investigation examines the relative importance of vertical space for laboratory nonhuman primates in relation to minimum space requirements. Space utilization was assessed in a group of rhesus macaques housed in a large pen. Provisions were made to ensure access to both the horizontal and the vertical dimension. An attempt was made to examine whether the animals had a preference for either of the two dimensions as primary living space.

Eight adult (4-20 years old) female and 2 adult male, 2 young (6 months -2 years old) female and 4 young male laboratory-born rhesus macaques (Macaca mulatta) were the subjects of this study. All animals were healthy. They lived as a breeding group in an indoor pen 568 cm deep, 248 cm wide and 206 cm high. The floor area was 14.0864 m2. The minimum floor space requirement for the group was 6.2 m2 according to federal rules (3 animals 1-3 kg, 12 animals 3-10 kg, 1 animal 11 kg). The group had visual contact with another troop housed under identical conditions in the same room.

The following structures made the vertical dimension of the pen accessible at two height levels.

Based on the occurrence of unidirectional yielding and fear-grinning dominance-subordination relationships between all 14 weaned animals (older than 1 year) were analyzed in a separate study. These data were used to establish a dominance rank order.

The animals were fed commercial dry food at 7:30, bread at 11:10, fruit and whole peanuts at 15:10. The food was distributed on the floor of both compartments. It was measured in a way that there were always leftovers, and animals had continual access to food throughout the day.

The pen was divided into 19 location sites: The floor, 12 platform sections (each platform was subdivided into a left, center, and right third), 3 swings, the frame, the ferris wheel, and the barrel (Figure 1). Instantaneous scan samples were made every full hour between 9:00 and 17:00 for twelve consecutive days and locations of all animals recorded on blueprint copies of the pen. Animals that were huddling together were specially marked. When huddling, partners were leaning on each other, resting their chins on each other's shoulder or neck. Partners usually had their anus around each other. Closing their eyes, huddling group members spent extended periods of time resting.

The animals were familiar with the observer and showed no noticeable reactions to his presence. The observer took written notes at a 1-meter distance from the wire mesh walls.

The percentage of occasions (108 scan samples) each individual was located on each site and on the wire mesh walls was used to evaluate individual as well as group (mean of all 16 individuals) utilization of space. Individual space usage was further assessed using the "spread of participation index" developed by Dickens3. Scores may range from 0 to 1, 0 indicating equal usage of all location sites, 1 indicating the use of only a single site. 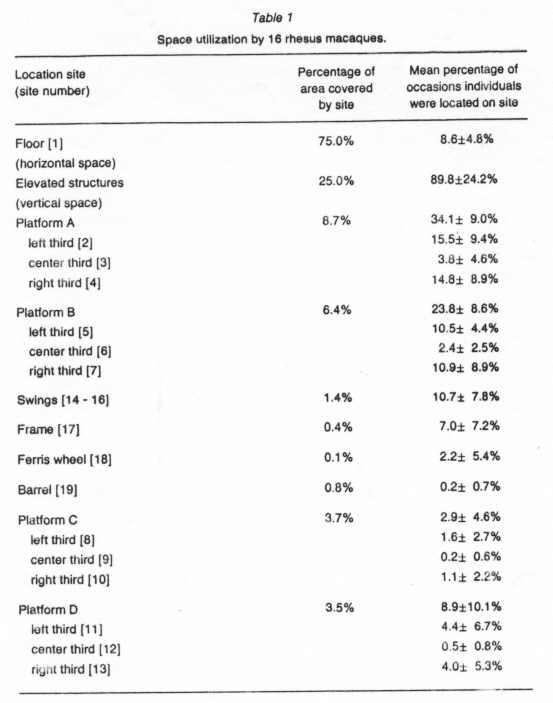 The higher an animal's rank position, the higher was its "spread of participation index" (rs=0.713) and the more often it was found on high-level structures (rs=0.481). These correlations were significant (Table 2).

On all 4 platforms, the animals were located at the left and right and significantly more often than at the center (Tab 1). 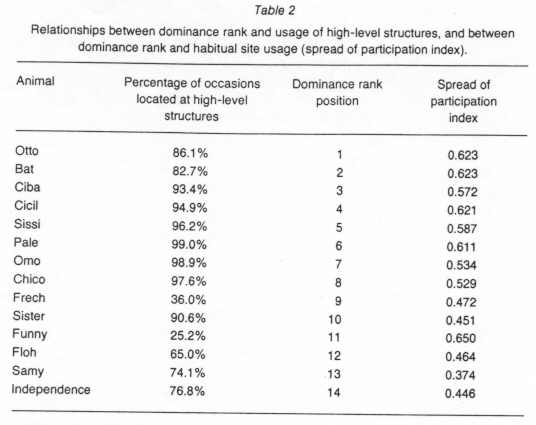 The animals of the study group made use of the vertical dimension significantly more than of the horizontal dimension, despite the fact that the floor offered an area 3 times larger than that of the total area of elevated structures. This is congruent with Bernstein & Mason's finding that captive rhesus macaques spend "at least three-quarters of the time above the ground"5 and with Traylor-Holzer & Fritz's finding that captive adult chimpanzees are "found most often above ground level"6. Rosenblum et al.7 reported a significant preference among captive pigtail and bonnet macaques to remain off the floor. Evidently, floor area has relatively little value as living space for most nonhuman primates and hence is not a particularly relevant parameter for the establishment of their minimum space requirements. Prescribing a minimum height along with minimum floor space is not enough, since most nonhuman primates are unlikely to make effective use of the vertical dimension if it provides no adequate structures for walking, perching, sitting lying and resting. The animals of the study group, for example, were located only 1.6% of times on the 16.8096 m2 of vertical wire mesh walls.

All members of the group would inevitably take to elevated sites whenever they heard or saw fear-inducing personnel. This suggests that they experienced a stronger feeling of security above the floor than on the floor. This assumption is supported by the observation that the animals huddled together with regularity on high-level structures but never on low-level structures or on the floor. Evidently, the floor and areas close to it were environments not considered safe enough for the communal rest period at mid-day. This is in line with the observation that more terrestrial primates such as baboons also choose elevated sites such as cliffs and trees not only for escape but also for communal rest8. Accessible vertical space is apparently essential for the well-being of nonhuman primates. Access to the vertical space is probably of particular importance for those that are confined in lower-row cages ( e.g. 30 cm above floor), and hence forced to continuously live close to the ground. These animals have a definitive disadvantage in comparison with those living in upper-row cages (e.g. 140 cm above floor) and they consequently make significantly more use of an accessible elevated structure such as a perches9.

With the exception of the ferris wheel and the barrel, which were used exclusively by young animals, high-level structures unlike low-level structures were utilized significantly more than expected. This indicates that the animals had a strong inclination to stay well off the ground. The high level sites of the pen provided not only better places for escape but also better vantage points and hence strategically more important areas than the low-level sites and the floor. The particular value of high-level sites is underscored by the fact that individuals were found more often at high level, the higher their dominance rank position was, while low ranking individuals had to contend with low sites and the floor. Moreover, high ranking individuals had higher "spread of participation indices" than low ranking individuals. This suggests that the animals were competing over access to the preferred high-level structures with high ranking group members being privileged to make habitual use of the most desirable sites. A similar situation has been described by Blood & Livant10, Austin & Bates11, Sundstrom & Altman12 and Savin-Williams13 in human groups where high ranking subjects make more habitual use of desirable areas than low ranking subjects.

Sitting at the end rather than in the middle of a platform diminished the chances of being attacked by surprise. Accordingly, the animals were found on all four platforms with consistency more often at the right and left sides, where they probably felt relatively secure, than in the middle, where they felt more insecure. Installing properly placed visual barriers on platforms might be a means of making otherwise avoided sections more attractive for the animals. A pronounced preference for edges and other 'covered' areas has also been observed in free-ranging rhesus macaques by Menzel14.

The present investigation leads to the following conclusions:

I wish to thank Klari Fajzi and my wife Annie for critically reading the manuscript and providing constructive advice and comments. Thanks are also due to Jackie Kinney and John Wolf for editing the manuscript and to Bob Dodsworth for preparing Figure 1. This project was supported by NIH grant RR-00167 to the WRPRC.

Reprinted with permission of the Institute of Animal Technology.