The purpose of this study is to consider space use patterns of a single group of captive chimpanzees (Pan troglodytes) housed in an indoor exhibit at the Cleveland Metroparks Zoo. Previous studies have focused on the space use of a group following movement from a small enclosure to a large outdoor enclosure (Bettinger et al., 1994; Clarke et al., 1982; Traylor-Holzer and Fritz, 1985; Matevia et at., 1991), use of large outdoor facilities (Menzel. 1969; Horvat and Kraemer, 1976), or space use patterns of mother-infant (Goff et al., 1994). This study differs from the previous research in that it focuses on a social group housed in a large indoor enclosure. This report summarizes results from two separate studies of the same social group. The first study focuses primarily on space use patterns, and the second study considers the relationship of space use patterns to behavior patterns.

Observation Methods
All observations were performed from the zoo visitors' side of the glass wall during normal public viewing hours (10:00AM - 4:45PM) between the dates of September 1996 and November 1996. Observations of each subject's position were taken at one minute intervals and plotted on a map of the enclosure. Observation order was random and each subject's position was noted in turn with a different color pencil. A total of 283 observations were recorded for each subject. Each of the overhead nets was approximately one tenth the size of the floor of the enclosure. The floor plan was thus divided into ten sections that were approximately the same size as one of the overhead nets. This resulted in twelve areas that were approximately equal in size (ten floor sections and two overhead nets). The total number of times that a subject was observed in each section was then counted.
A "spread-of-participation index" score (Dickens, 1955; Sundstrom and Altman, 1974) (SP) was used to evaluate the relative use of the different areas in the enclosure. Scores near zero indicate use of many sites, while scores near one indicate use of a single site. SP scores were also compared with independent variables including age and sex. Due to
the very small sample size, and the fact that there was only one male present in the sample, the results could not be analyzed statistically, but we were able to examine the information for general trends.

Results
Most group members used floor areas of the enclosure. They tended to sit to the left side of the enclosure, providing a clear view of the caregiver's walkway. No one used the ropes, and only one subject used the overhead net. Since no other subject used the overhead nets, we removed that area from the SP analysis. An analysis of SP scores shows an inverse relationship between age and an increase in spread of participation score (Table 1). That is, two older subjects (JI and TA) used a great number of different areas of the enclosure than two of the younger subjects (BO and BI). 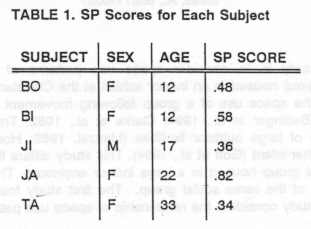 Results suggest individuals preferred floor areas and stationary flat surfaces over nets and ropes. This result is similar to Howell et al (1997) that shows an adult preference for flat, stationary structures, rather than ropes and nets that provide a less secure substrate. The inverse relationship between SP scores and age differs from previous studies that report adult preferences for particular areas of the enclosures (Traylor-Holzer and Fritz, 1985; Goff et al, 1994). In this study we found older adults used more enclosure areas than younger adults who showed enclosure area preferences. To better understand this result, a follow-up study was conducted to consider the relationship between SP score and behavior patterns.

Data was collected on the same group of subjects from January 1997 to March 1997. Observations were conducted at one minute intervals to test for one of six behavior categories: foraging/feeding, locomoting, display, play, grooming, and inactive. Observation order was random and each subject's behavior was noted sequentially. A total of 977 observations were collected. Behavioral frequencies were converted to percentage of time spent in each activity pattern for this analysis. 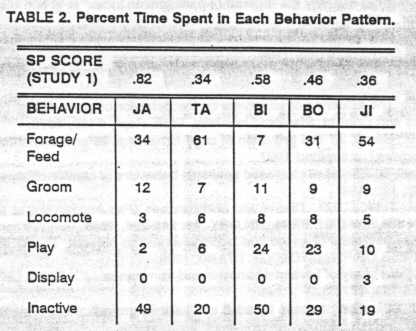 This group had been together for several years and, as a result. had well-established space use preferences and behavioral patterns. The preference for floor areas differed from past research (Traylor-Holzer and Fritz, 1985) , but is keeping with a recent study that demonstrates an adult preference for solid, immovable structures such as benches (Howell et al, 1997).
This study also suggests a relationship between activities and space use patterns. Where older subjects preferred to forage, they used most of the enclosure. Where younger subjects' interacted with the public, they used front areas of the enclosure and the back left comer of the enclosure. This corner area provided the clearest view of the caregivers in the hallway behind the enclosure, an area where the caregivers dispensed food periodically throughout the day. These preliminary results also suggest that encouraging individuals to use more of their enclosure may result in decreased inactivity. It also suggests the provision of forage materials (seeds, cereal, and popcorn) encouraged older subjects to use more of their enclosure. By encouraging use of different areas of the enclosure, we may be able to increase activity and time spent in species-typical behavior patterns for five captive chimpanzees.

I would like to thank Dr. Patty McDaniel, the research department, and the carestaff at the Cleveland Metroparks Zoo for allowing me to conduct this study. I would also like to thank Dr. Scott Orcutt of the University of Akron for his help in designing and conducting this study, and Sue Howell of the Primate Foundation of Arizona for her editorial advice on this manuscript.

Menzel, E.W. Jr. Chimpanzee utilization of space and responsiveness to objects. PROCEEDINGS OF THE SECOND, INTERNATIONAL CONGRESS OF PRIMATOLOGY 1 :72-80, 1969.

Reprinted with permission of the Editor of The Newsletter.