Isosexual pair-housing of ten female and six male previously single-caged adult stump-tailed macaques (Macaca arctoides) was attempted. Partners were introduced to each other following the establishment of rank relationships during a three-day non-contact familiarization period. Pair formations did not entail serious antagonism; instead companions engaged in conciliatory interactions.

After a six-month habituation period companions spent on average 22.0% of one-hour observation sessions interacting with each other in affiliative interactions. They preferred not being alone even though this reduced their available cage space.

It was concluded that single-caged stump-tailed macaques readily adapt to living with another conspecific. Pair-housing made formerly socially deprived subjects truly social animals by providing them an appropriate environment for the expression of their social disposition.

It is a common practice to house research stump-tailed macaques (Macaca arctoides) in single cages.1 The ethical and scientific implications of social deprivation are obvious2,3 and have been taken into account by recent rules and regulations stipulating that specific provisions must be made to address the social needs of nonhuman primates;4 these needs should be given equal consideration with environmental factors such as lighting, heating, ventilation and caging.5

Despite the conventional wisdom that unfamiliar adult macaques are more likely to fight than to coexist peacefully6-10 safe pair formation techniques have recently been developed for previously single-caged cynomolgus macaques (Macaca fascicularis)7 and rhesus macaques (Macaca mulatta).11 The present study adapts these techniques to stump-tailed macaques (Macaca arctoides). Pair-housing of singly caged adults was attempted, and a behavioural assessment conducted after a 6-month habituation period.

Subjects were ten female and six male adult (older than six years) stump-tailed macaques assigned to biomedical research projects. The animals had lived in single cages for several years before being transferred into eight isosexual pairs of unrelated partners.

Partners were familiarized for three days in double cages with grated partition (animals cannot touch each other with fingertips), allowing them to establish dominance-subordination relationships without risk of injury. They were then introduced to each other by simultaneously being transferred into a different double cage, (to avoid possible territorial antagonism), without a partition.

The animals were fed commercial dry food at 07.30, supplemented with fruit at 15.00. Water was available ad libitum. Room temperature was maintained at 20-22ºC, with a relative air humidity of 40-60% and a 12 hr artificial light/dark cycle.

The following recordings were carried out:

The animals were familiar with the author who sat at a 1.5m distance while taking manual recordings.

Statistical analysis was done using the Mann-Whitney U test12 and the level of significance set at p<0.05.

All pairs established clear-cut dominance-subordination relationships during the non- contact familiarization period. After being introduced to each other in a double cage without the partition all pairs showed signs of partner compatibility. Females started allogrooming within one to nine minutes. They consistently reconfirmed their rank relationships within 30 minutes by unidirectional yielding (four pairs) or grinning (one pair), never by overt aggression. Males promptly engaged in "hold-bottom rituals"13 upon being introduced to each other. The partners of two pairs reconfirmed their dominance-subordination relationships within 30 minutes by means of unidirectional yielding. In the third pair, dominance re-assertion was associated with a brief noninjurious fight 12 minutes after introduction. The originally subordinate partner readily displayed grinning; a hold-bottom ritual followed.

Partner compatibility was confirmed throughout the six-month follow-up period. No visible injuries were detected during that time.

All 16 stump-tailed macaques engaged in social behaviours during the one-hour observation sessions six months after pair formation. The cumulative time partners spent interacting with each other ranged from 124 sec/h (3.4%) to 1217 sec/h (33.8% ) with an average of 793 sec/h (22.0% ). Females and males did not show a significant difference in the percentage of time spent interacting with their companions (mean,females = 24.9±8.9% vs mean,males = 17.2±11.5%).

Grooming (Figure 1) was the salient activity, accounting on average for 76.6% of total interaction time. Other social behaviours accounted for 24.4% of interaction time; they included hugging (21.8%), holding bottom (1.5%), threatening, grinning and yielding. 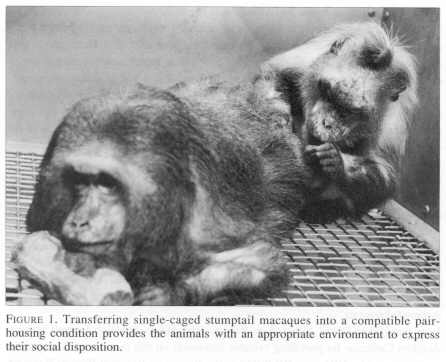 The present findings indicate that research stump-tailed macaques do not have to be socially deprived in order to guarantee their physical safety. Following a careful pair formation protocol, previously single-caged individuals readily adapted to living with a conspecific.

Grooming and hold-bottom rituals, typical signs of conciliation in stump-tailed macaques13,14 characterized the initial encounter between paired partners. Having established dominance-subordination relationships during the preceding non-contact familiarization, companions had little reason for strife and expressed their peaceful intentions. The reassuring efforts shown by stump-tailed macaques are in contrast to the generally more tense situation during pair formation in rhesus macaques." This observation is in line with findings of deWaal & Ren,13 emphasizing that the conciliatory tendency of stump-tailed monkeys is stronger than that of rhesus macaques.

Partners made little use of the privacy panel to be alone, but spent significantly more time in the same half of the cage in close proximity to each other. The same phenomenon has been described in rhesus macaques;15 it underscores the need for companionship in both species. When given the choice, paired stump-tailed macaques, like rhesus macaques, prefer not being alone even though this may imply a considerable reduction of cage space.

After a habituation period of six months, paired companions spent on average 22% of their time interacting with each other in species-typical ways. This is comparable with the situation in groups of stump-tailed macaques containing animals of both sexes and different ages,14,16,17 and suggests that being transferred from a single-housing to a pair-housing condition made the subjects social animals in the true sense by providing them an appropriate environment for the expression of their social disposition.

I am thankful to David Abbot, Kim Bauers, John Ream, Lesleigh Luttrell and my daughter Catherine for providing valuable comments on this manuscript. This project was supported by NIR grant RR-00167 to the Wisconsin Regional Primate Research Center.

15. Reinhardt, V and Reinhardt, A. (1991). Impact of a privacy panel on the behavior of caged female rhesus monkeys living in pairs. Journal Experimental Animal Science, 34: 55-58.