The practicability of social enrichment for singly caged adult rhesus monkeys was examined. Twenty-nine weaned rhesus monkey infants were removed from breeding troops to avoid overcrowding and were placed with unfamiliar singly caged adults. An adult-infant pair was considered compatible when 1) the two animals started huddling with each other within the first 5 days after pair formation and 2) the infant showed no signs of depression and took its share from a limited amount of favored food. Adult-infant pairs were compatible in 90% (26/29) of cases. Compatibility depended neither on the sex, age, and origin of the adult nor on the sex of the infant. There was no evidence that partners lost interest in each other during 7-11 months of follow-up observations. Three adults exhibiting stereotypical behavior abandoned their peculiar habits after they had lived with their young companions for 4 months. It was concluded that the often-heard notion that rhesus monkeys are highly aggressive should not prevent simple attempts to provide singly caged animals with a companion.

Nonhuman primates housed under zoo or laboratory conditions in single cages are commonly subjected to an understimulating environment designed for ease of sanitation but having little or no provision for the psychological well-being of the animals. Given the fact that nonhuman primates are intelligent animals, adapted to a challenging environment, ethical considerations are appropriate in promoting efforts to reduce the degree of boredom attendant on single-cage housing [Yerkes, 1925; Spinelli and Markowitz, 1985; Stewart and Cook, 1986; Wolfe, 1986; Fox, 1986; Brinkman, 1987].

Attempts to enrich the environment of captive nonhuman primates generally focus on animals living in groups [Maple, 1979; Chamove et al, 1982; Westergaard and Fragaszy, 1985; Tripp, 1985; Bloomstrand et al, 1986; Champoux et al, 1987], while individually caged animals are largely neglected despite the fact that they have to cope with an intrinsically more deprived environment. The use of electrical and mechanical manipulanda [Markowitz, 1979, 1982], nylon balls [Renquist and Judge, 1985], video displays [Spinelli and Markowitz, 1985], and food puzzles [Line, 1987] are first steps to bring some diversion into the single cage, though the long-term attractiveness of such devices for the caged subject needs to be demonstrated.

The present paper is a preliminary report on the practicabilitv of social enrichment with infants for singly caged adult rhesus monkeys. The study was based on the assumption that socializing an isolated individual with a compatible conspecific would enhance its psychological well-being [cf. Fox, 1986] by promoting the expression of hitherto inhibited basic behavior patterns such as huddling and grooming. Weaned infants, but not mature animals, were chosen as potential companions because it was anticipated that they would trigger affectionate rather than aggressive behavior [Lorenz, 1971; Redican and Mitchell, 1974; Gibber and Goy, 1985].

Weaned infants were removed from breeding troops to avoid overcrowding. There were 13 females and 16 males, 1-11/2 years old (Tables 1,2). Usually such surplus animals would be individually caged at about 3 years of age. Instead, these 29 infants were placed with randomly selected, unfamiliar, singly housed adult animals between June and October 1986. Pairing adults and infants did not interfere in any way with the routine management and experimental procedures.

The 29 adult animals were 7-29 years old (Tables 1, 2). There were 17 females and 12 males who had lived singly in 70 X 75 X 77-cm stainless steel cages for more than 1 year. Forty-one percent (12/29) of the adults were born in the wild; 59% (17/ 29) were born in captivity (Tables 1, 2). At the time of this study, seven animals were assigned to research projects. Three individuals showed stereotypical behavior patterns: female 1289 [Hatty] (Table 1) yawned and pulled her ear whenever she was approached by personnel; female 1715 [Weaver] (Table 1) consistently shook one of her hands, and female ae4l [Chewy] (Table 1) bit her left thumb when approached by personnel.

Compatibility of adult-infant pairs was checked during 5-minute observations four times a day during the first 5 days of pair formation and one to two times a day thereafter. Compatible pairs had been checked for 7-11 months at the time this manuscript was written.

An adult-infant pair was considered compatible when:

Compatible pairs will be moved to a larger cage when the young partner reaches the age of 2-2½ years. The young monkeys will be grouped temporarily with peers of the opposite sex at puberty to permit the normal development of sexual behavior patterns.

An adult-infant pair was considered incompatible when 1) the two animals did not huddle with each other during the first 5 days after pair formation and/or 2) the infant showed signs of depression by exhibiting general inactivity and/or constant avoidance of the adult partner, and/or 3) the adult injured the infant. Infants were removed in such cases.

The animals were kept indoors and received commercial dry food and water ad libitum, supplemented daily with fruit and bread. They were weighed monthly and tested for tuberculosis quarterly. Room temperature was maintained at 21ºC, with a 12-hour light cycle. Each cage was provided with a tree branch as a perch and object for manipulation [Reinhardt et al, 1987]. 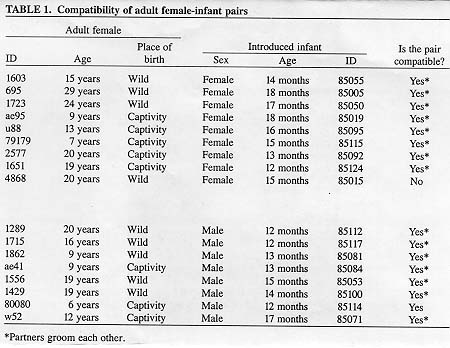 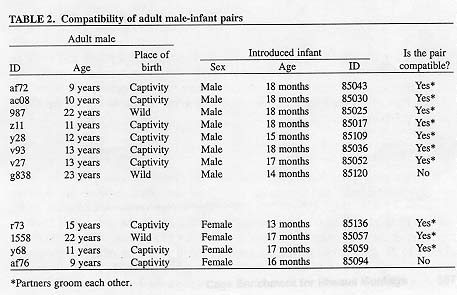 Adult-infant pairs were compatible in 90% (26/29) of cases, with the adult animal huddling with the introduced infant and the latter showing no signs of depression (Tables 1, 2). Compatibility depended neither on the sex (females 94%, males 83%), age (Tables 1, 2), and origin (92% born in the wild, 88% born in captivity) of the adult animal nor on the sex (females 85 %, males 93 %) of -the infant (Tables 1, 2). Compatible partners not only huddled with each other but were also observed grooming each other in 96% (25/26) of cases (Tables 1, 2). There was no evidence that they lost interest in each other throughout the 7-11 months of follow-up observations. The three adults that exhibited stereotypical behavior gradually abandoned their peculiar habits, and none of them showed it after living with an infant for 4 months.

Adult-infant pairs were incompatible in only three (10%) of 29 cases (Tables 1, 2). Female 4868 grabbed the infant immediately upon its arrival; she continued to do this repeatedly during the next 30 minutes, after which the infant was removed. Male at-76 bit the infant on the 4th day of introduction. The youngster was slightly injured, although not bleeding, and began to avoid the adult male; it was removed the same day. Though huddling with the infant and grooming it, male g838 frequently grabbed his companion, who gradually showed more and more avoidance behavior; the animals were separated after 9 days.

This paper has described an inexpensive, low-risk method of enriching the environment for singly caged adult rhesus monkeys.

The first transfers of weaned infants to individually housed adults were carried out with some apprehension, particularly when infants were being paired with partners that were 4-6 times heavier than themselves. These apprehensions, however, were not necessary since adults of both sexes interacted with their young companions in equally amicable ways. The affectionate nature of these relationships became apparent in 90% of pairs within the first 5 days of pair formation and could be traced throughout follow-up observation periods of 7-11 months. This high success rate is encouraging. We are therefore in the process of establishing new compatible adult/infant pairs while testing at the same time the possibility of pairing singly caged adults with each other for the purpose of environmental enrichment [Reinhardt et al, 1987].

There is no way to quantify objectively an animal's psychological well-being, but it seems obvious that social animals have social needs and hence feel better when they are living together than when they are kept separately in an understimulating, barren environment. An often-heard notion holds that rhesus monkeys are highly aggressive animals [Lindburg, 1971; Fairbanks et al, 1978; Teas et al, 1982; Thierry, 1985] and that "any plan to increase social interaction increases the risk of injury and death" [Line, 1987]. The present findings indicate that this warning should not prevent simple attempts to provide singly caged individuals with a companion.

We are very thankful to Dr. Joseph Spinelli, who encouraged us to publish our preliminary findings and who provided valuable comments on this article. Thanks are also due to Ms. Peggy O'Neill, Dr. Frans de Waal, Mr. John Wolf, and three anonymous referees for critically reading the manuscript and to Mrs. Jackie Kinney and Mrs. Mary Schatz for typing it. Figures 2 and 3 were kindly prepared by Mr. Robert Dodsworth. This project was supported by NIH grant RR-00167 to the Wisconsin Regional Primate Research Center; WRPRC publication 26-034.

Stewart, W.; Cook, M.H. The new legislation from the point of view of the USDA. 14th Annual Workshop, Association of Primate Veterinarians, Chicago, 1986.

This article originally appeared in Zoo Biology 6, 365-371 (1987).
Reprinted with permission of the Editor.