There is widespread concern that aged rhesus monkeys who have been housed singly for a long time would do better living alone than sharing a cage with a companion.

Ten female and five male rhesus monkeys (Macaca mulatta), 22 to 33 years old and deprived of physical contact with any other conspecific for more than 10 years, were socialised with weaned infants (11 pairs) or with each other (2 female -female pairs) using two standard methods of pairing.

Pairing was associated with a total of 7 non-injurious aggressions during the first hour. Pairs were compatible (no visible signs of injury, adequate food sharing, no signs of depression) in every case throughout a one year follow-up period.

The aged monkeys' body weight three weeks after pairing were on average 0.8% greater than one week before pairing, suggesting that their well-being was not jeopardised by the presence of a compatible companion.

It was concluded that social enrichment can be achieved for old rhesus monkeys who have lived singly for many years without undue risks. The animals' high degree of social acceptance was taken as a sign of their inherent social disposition.

Several techniques have recently been developed to provide social enrichment for previously single-caged macaques1-6. There is a widespread concern that aged animals who have been housed singly for many years would do better living alone than sharing the cage with a companion. This concern is the reason why aged animals that have lived a major part of their lives in single cages have usually been exempted from social enrichment programs. Indeed, aged, singly caged rhesus monkeys often look fragile and lethargic, giving the impression that the presence of a conspecific may jeopardise rather than enhance their well-being. On the other hand, there is no reason to believe that older individuals do not share the social disposition characteristic of their kind and hence have an inherent need for companionship.

To the knowledge of the author, only one published report describes an attempt to resocialise aged rhesus monkeys that were socially deprived for many years. Line et al7 formed groups of 13 pre-familiarised rhesus monkeys of both sexes. The animals were 19 to 28 years old and had been singly caged for a mean of 13 years. Ten of the 13 animals sustained injuries during the first 8 days of group formation. The injuries were were fatal in one case and required the permanent removal of a victim in another case; wound healing assisted by veterinary care in six other cases; the remaining two cases of no veterinary care. The high incidence of injuries (10 out of 13 = 77%) makes group formation of aged rhesus monkeys rather unattractive, in particular when the subjects are assigned to a research protocol.

The present study tests the safety of pair formation as a means of social enrichment for aged rhesus monkeys who have been caged singly for many years.

The subjects of this study were 10 female and 5 male healthy rhesus monkeys (Macaca mulatta) that were assigned to a research protocol. Their age ranged from 22 to 33 years with a mean of 27.5±3.3 years. All fifteen animals had been kept in single cages without physical contact with any other conspecific for more than 10 years. Three animals were born in the wild, six in the laboratory; the origin of the remaining six monkeys was unknown.

All animals were provided with a companion using two standard methods of pairing1,3.

1. The five males and six of the females were paired at random with six male and five female, naturally weaned surplus infants, 1-2.5 years old, from the breeding colony. The young animals were transferred directly, that is without prior familiarisation in the adults' cages. Six isosexual and five heterosexual pairs were thus formed. Infant and adult partners were not related.
2. The remaining four females were socialised by forming two pairs. Partners were first familiarised in a double cage with grated partition permitting non-contact communication. They were paired within one hour in another double cage without partition after one of them had displayed clear signs of subordination, such as, yielding or fear-grinning.

Pairs were observed during the first hour after pair formation and incidences of physical aggression, that is, slapping, pushing, biting, fighting, were recorded. Partners were checked for signs of injuries (bruises, scratches, lacerations) on at least three occasions daily during a follow-up period of twelve months. The fifteen monkeys were weighed one week before pairing and three weeks after pairing.

Partners were considered to be compatible if neither inflicted a serious wound on the other, both secured an adequate share of food, and neither showed signs of depression. Partners were left together only if they were compatible.

Pairing the four aged females with each other was associated with one physical aggression: 29 year-old female Winie attacked her 24 year-old female companion Wicht shortly after pair formation and reinforced her dominance status by biting her partner's neck (Table 1 ). This resulted in no visible injury. The two engaged in extensive social grooming three minutes after this initial aggressive dispute.

Partners .were compatible in every case throughout the one year follow up period. No visible signs of injuries were noted during this time. 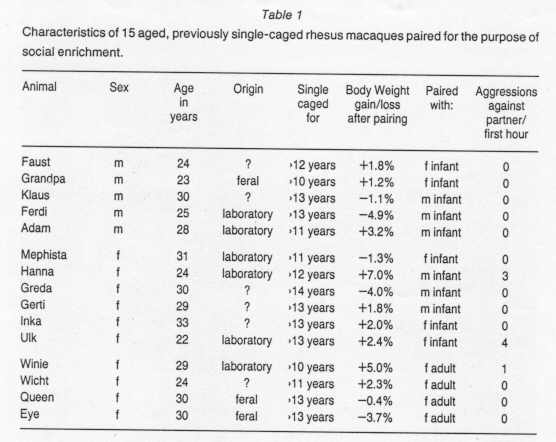 The findings of the present study are encouraging because they clearly show that social enrichment can be achieved even for old rhesus monkeys without undue risks. Pairs were compatible in every case and there was not a single incidence of injury. This high degree of social acceptance (Figure 1) was a surprise since the aged partners had not had physical contact with any conspecific for more than 10 years. It underscores the animals' inherent social disposition and suggests an underlying need for companionship. Social enrichment of aged rhesus monkeys that have lived singly for many years.

The body weights of the aged monkeys were not affected by the presence of a companion, indicating that pairing did not jeopardise their general health.

I am very grateful to Ms. Kim Bauers for providing valuable comments on this manuscript and to Mr. John Wolf for editing it. This project was supported by NIH grant RR-OO167 to WRPRC.