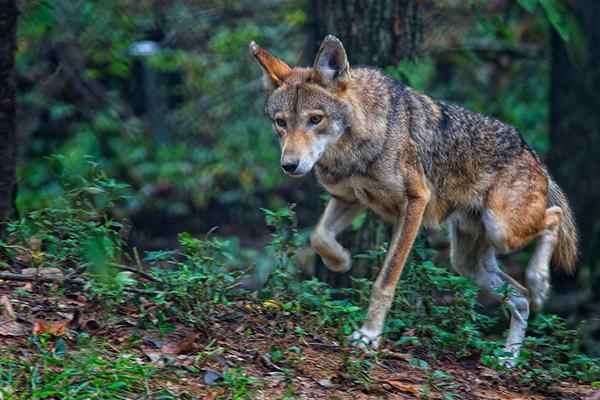 Chapel Hill, N.C.—The US District Court for the Eastern District of North Carolina approved a settlement agreement today between the Animal Welfare Institute (AWI), Defenders of Wildlife (Defenders), the Red Wolf Coalition (RWC) and the North Carolina Wildlife Resources Commission (NCWRC) concerning litigation over coyote hunting in the five-county area of eastern North Carolina inhabited by the world’s only wild population of endangered red wolves. This agreement settles a lawsuit brought by AWI, Defenders, and RWC, which alleged that, by authorizing coyote hunting in the five-county recovery area during the day and night, NCWRC caused red wolves to be killed or otherwise harmed in violation of the Endangered Species Act (ESA).

The settlement outlines significant steps to protect endangered red wolves in North Carolina, including banning coyote hunting at night throughout the five-county Red Wolf Recovery Area and during the day on public lands, except in limited circumstances. It also requires permits to kill coyotes on private lands, mandates reporting of all kills, and prohibits coyote contest hunts throughout the recovery area. Overall, this agreement aims to continue to decrease threats posed by indiscriminate coyote hunting, while also addressing the concerns of local private landowners and state and federal agencies that are in charge of red wolf recovery.

“This settlement will advance the long-term protection of red wolves by reducing the likelihood that they will be killed by hunters who mistake them for coyotes, thereby facilitating species recovery,” said D.J. Schubert, wildlife biologist for AWI.  “With only an estimated 100 red wolves remaining in the wild, each death by gunshot jeopardizes the survival of the species.”

On May 13, 2014, the federal district court banned all coyote hunting in the Red Wolf Recovery Area. NCWRC responded by denying sterilization permits for coyotes that are in danger of cross-breeding with red wolves; a critical component of red wolf recovery.

This summer, the U.S. Fish and Wildlife Service (USFWS) announced that it would review the status and future of the Red Wolf Recovery program, potentially terminating it and pulling the red wolves out of the state. USFWS received over 110,000 comments from people urging USFWS and NCWRC to keep the red wolves in North Carolina, increase their numbers, and add additional reintroduction sites. Since the injunction has been in place, reported gunshot mortality of the wolves is nearly nonexistent. In recent years, up to 10 percent of the population have been gunned down, with a number of these deaths likely attributable to the difficulty in distinguishing red wolves from coyotes.

“National and North Carolina citizens have spoken loudly in support of continuing to grow and recover the red wolf population in North Carolina and elsewhere,” stated Tara Zuardo, wildlife attorney for AWI. “Continuing this very successful recovery program is in the best interest of the species and fulfills the conservation mandate of the Endangered Species Act.”