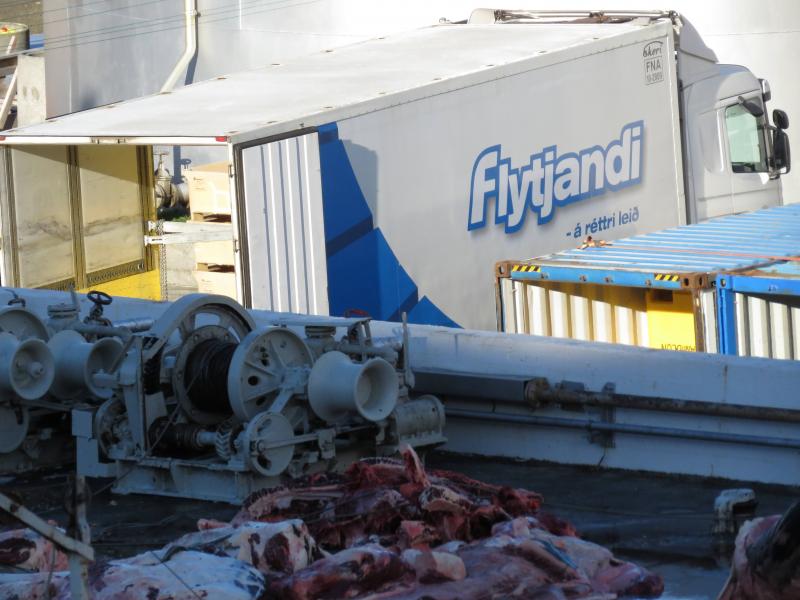 LONDON—Iceland’s controversial fin whale hunt has now ended with a catch of 155 endangered fin whales, the largest slaughter since the 1986 moratorium on commercial whaling.

New evidence obtained on the ground by the Environmental Investigation Agency (EIA) and the Animal Welfare Institute (AWI) reveals the ongoing involvement of international seafood giant HB Grandi in the whaling business, despite its claims to the contrary.

In gathering evidence, EIA and AWI documented a truck belonging to Norðanfiskur—a seafood company wholly owned by HB Grandi since 2014—transporting crates of whale meat and blubber from the whaling station at Hvalfjörður to Hvalur’s freezer facility in Hafnarfjörður.

HB Grandi isIceland’s largest seafood company and its CEO, Vilhjálmur Vilhjálmsson, has repeatedly insisted that the company “is not involved in whaling and never has been.”This claim ignores the fact that multi-millionaire Icelandic whaler Kristján Loftssonis chairman of HB Grandi’s board of directors and his whaling company, Hvalur, remains its single largest shareholder (via holding company Vogun).

“It is deeply disappointing, but no surprise, that HB Grandi’s repeated assurances that it has nothing to do with whaling have yet again been exposed as nothing but a worthless sop to shareholders and customers who are rightly concerned about its association with the internationally condemned hunting of endangered fin whales,” said Clare Perry, Team Leader of EIA’s Oceans Campaign.

Another major player in the transportation of whale meat and blubber around Iceland isEimskip, a company 25 per cent owned by Yucaipa, a private equity company based in the US. Eimskip’s central involvement in Icelandic whaling includes hauling Hvalur whale products within Iceland and shipping them overseas.

In January 2014, Eimskip-chartered vessel the Westerkade was used to transport fin whale meat from Iceland to Halifax, Canada. The shipment was then sent by rail to Vancouver, where it was loaded onto another vessel that sailed to Seattle before departing for Yokohama, Japan.

Susan Millward, executive director of Washington DC-based AWI; stated: “It’s disgraceful that a US firm is being tainted by the blood of fin whales. We implore Yucaipa, as Eimskip’s largest shareholder, to exert its influence to end Eimskip’s supporting role in Iceland’s fin whale hunt.”

Iceland has continued exporting whale products in defiance of an international ban on such trade; more than 7,200 tonnes of blubber and meat have been sent to Japan since Iceland resumed commercial whaling in 2006. The most recent shipment of 1,800 metric tons arrived in Osaka in late August, following passage through Russia’s Northern Sea Route.

EIA and AWI are calling on International Whaling Commission member states in Europe and the US to increase diplomatic pressure on Iceland to compel it to abide by the moratorium on commercial whaling and the ban on international trade in whale products under the Convention on the International Trade in Endangered Species (CITES).

Images and footage are available on request from EIA Press & Communications Officer Paul Newman on paulnewman@eia-international.orgor +44 207 354 7960

About the Animal Welfare Institute (AWI)
The Animal Welfare Institute is a nonprofit charitable organization founded in 1951 and dedicated to reducing animal suffering caused by people. AWI engages policymakers, scientists, industry and the public to achieve better treatment of animals everywhere—in the laboratory, on the farm, in commerce, at home and in the wild. www.awionline.org