The SAFE Act would prohibit the slaughter of horses in the United States for human consumption, as well as the export of live horses for the same purpose. Please visit AWI’s Action Center to urge legislators to cosponsor this legislation.

“The permissive allowance of such horsemeat used for human consumption poses a serious public health risk.”1

The US Food and Drug Administration bans the presence of 379 common equine drugs in animals slaughtered for human consumption. However, there is no procedure in place to ensure that American horses, sold to slaughterhouses and killed for human consumption, are free of these FDA-banned substances. When horses are sold, especially through an auction, there is no required transfer of information regarding the substances they received during their lifetime. Therefore, there is no mechanism in place to ensure horses frequently bought at auction by kill buyers—those who purchase them for slaughter in Mexico and Canada—have not been given dangerous substances before they become part of the food chain.

Horses are routinely given substances that are dangerous to humans. Most American horse owners do not imagine that their horses may someday be slaughtered for human consumption. Almost universally, they give their horses medications, antibiotics, ointments, wormers, and other substances that are labeled “not for animals intended for human consumption”—some of which linger in the body for long periods.

A study published in May 2010 in the journal Food and Chemical Toxicology found that substances routinely given to American horses cause dangerous adverse effects in humans. One commonly used anti-inflammatory drug, phenylbutazone (bute), can be lethal if ingested by people. The most serious effect of bute on humans is bone-marrow toxicity, leading to agranulocytosis (failure to produce white blood cells, causing chronic infections) and aplastic anemia (insufficient production of red and white blood cells and platelets). Similar blood conditions such as leucopenia, hemolytic anemia, pancytopenia, and thrombocytopenia may also occur in people who consume bute. The National Toxicology Program has determined that bute is a carcinogen. For these reasons, the FDA bans this substance for human consumption.

Nearly all racehorses in America are treated with bute. Racehorses are frequently shipped to Mexico and Canada to be slaughtered for human consumption when their performance flags, often within days or weeks of receiving their last dose of bute. Horsemeat may be ground together with beef and sold without proper identification, so consumers could be unwittingly ingesting banned substances, with serious health implications.

The European Union has a policy prohibiting importation of the meat of any horse who has ever received bute. Nitrofurazone, the most common wound ointment given to American horses, is also prohibited for use on any horse whose meat is shipped to EU countries.

The United States needs to shut down the horse slaughter channels that currently put consumers at risk, and ensure that meat from American horses is not jeopardizing the health and lives of consumers. To learn more about horse slaughter, click here. 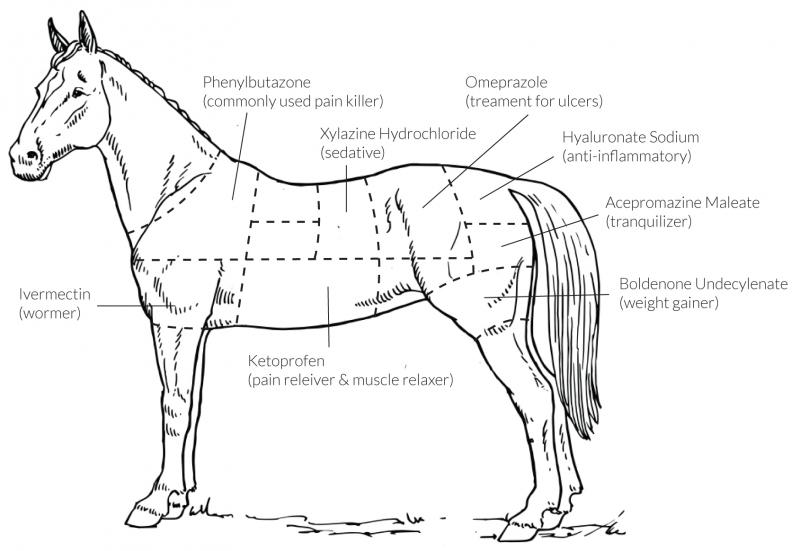 Poison: It's what's for dinner when horsemeat is on the menu
Those promoting horsemeat consumption claim horsemeat is leaner (and therefore, supposedly, healthier) than beef. What they fail to point out is that, unlike cattle, horses are not raised for meat, and are given hundreds of legal and illegal drugs rendering their meat unsafe for human consumption in the United States and abroad. However, because of confusing and conflicting US and foreign laws, horse meat slips through the regulatory cracks and is consumed overseas by unsuspecting diners. The diagram shows just a few of the banned and dangerous drugs that consistently end up in horse meat and on people's plates.