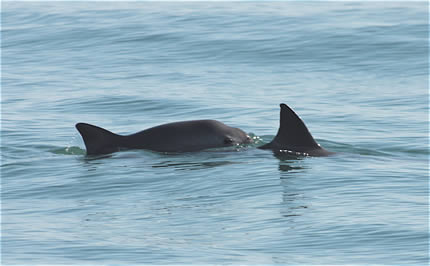 La Jolla, CA—Scientists announced this week that only an estimated 30 vaquita porpoises remain in the world. In a new report, the International Committee for the Recovery of the Vaquita (CIRVA) recognizes that the extinction of the vaquita—the world’s smallest and most endangered porpoise, found only in Mexico’s northern Gulf of California—is imminent unless Mexico permanently bans gillnet fishing, removes illegal nets from the water and increases enforcement efforts.

The vaquita population has been decimated in recent years, with nearly half the population lost from 2015 to 2016 alone. The primary threat to vaquitas is entanglement in fishing gear, including in gillnets set for totoaba, an endangered fish endemic to the Gulf. Totoaba swim bladders are illegally exported to Asia to make soup with perceived medicinal properties. Demand for the bladders spiked around 2011 and, since then, the vaquita’s population has declined by 90 percent.

“This shocking new report shows that vaquitas are on the verge of vanishing forever,” said Sarah Uhlemann, international program director at the Center for Biological Diversity. “We will lose this wonderful little porpoise from our planet—and soon—unless Mexico finally gets serious about banning gillnets and actually enforces the law.”

In 2015, in an effort to stem the vaquita’s decline, Mexico temporarily banned the use of gillnets within the vaquita’s range, but enforcement has been dismal. During a 15-day survey in late 2016, of 85 fishing nets removed from a small portion of the vaquita’s habitat, 23 were active totoaba nets. Three vaquita were also found dead in March 2016 after entanglement in totoaba nets.

“There’s no time left for half-hearted efforts to save the vaquita,” said Zak Smith, senior attorney with the Natural Resources Defense Council’s Marine Mammal Protection Project. “Mexico has a choice to make: put in an all-out effort to permanently ban and remove all gillnets from vaquita habitat in the Gulf of California or be responsible for the extinction of this beautiful, unique porpoise. If they don’t take real action, the disappearance of vaquitas is on them.”

Mexico’s current gillnet ban ends this April, and it is unclear whether Mexican fisheries agencies will extend the ban, which is critical to saving the vaquita. Disturbingly, last month, Mexico announced it will go forward with its controversial curvina fishery, despite evidence that totoaba poachers use the curvina fishery as cover for their illicit activities.

“Several international entities, including the International Union for Conservation of Nature and the International Whaling Commission, have called on Mexico to make the gillnet ban permanent,” said Kate O’Connell, marine wildlife consultant with the Animal Welfare Institute. “If the government of Mexico does not immediately enact and enforce a permanent gillnet ban, the vaquita will perish, as will Mexico’s hope of being recognized as a responsible fishing nation.”

The new report also recommends a temporary captivity program for some vaquita. But scientists emphasize that the capture program should not divert effort and resources away from instituting a permanent gillnet ban—the highest priority conservation action—and protecting the species in the wild.

“The decrease in the vaquita population by 90 percent over the last 5 years and almost 50 percent in 2015 alone shows there was never a real commitment by the Mexican authorities to combat totoaba fishing or gillnets in the vaquita’s habitat. Totoaba and gillnet fishing continued and will finish off the few vaquita that remain in the wild if the authorities do not take real action,” said Miguel Rivas, ocean campaigner for Greenpeace Mexico.

About the Animal Welfare Institute
The Animal Welfare Institute (www.awionline.org) is a nonprofit charitable organization founded in 1951 and dedicated to reducing animal suffering caused by people. AWI engages policymakers, scientists, industry, and the public to achieve better treatment of animals everywhere – in the laboratory, on the farm, in commerce, at home, and in the wild. For more information, visit www.awionline.org.

About Greenpeace
Greenpeace is the leading independent campaigning organization that uses peaceful direct action and creative communication to expose global environmental problems and to promote solutions that are essential to a green and peaceful future. For more information, visit www.greenpeace.org.