"We, the people involved in animal care, are trying to develop improved methods of keeping our animals, methods which will take into account more of the animals' behavioral needs. We now have a large number of rabbits in runs which permit them to have indoor and outdoor space. This allows them to jump, run, sit up and have all the social interaction they need. We believe that although our laboratory animals have not encountered a predator in generations, they still have the need for a haven when they are startled. Gordon Gray describes a box which we place in the large guinea pig bins and which serves as a place for them to duck into when they are startled. It provides us with a very useful tool because we make use of this response to catch the guinea pigs without having them fleeing all around the bin. We believe that the guinea pigs are much less excitable in this set up and we are putting together the study to demonstrate this.

"Jenny Boyd describes some additions we made to our mouse boxes, to provide cover and variety in the box, which provided us with some unexpected information. We found that the mice would use some of the additions as toilets, hence the title 'The Toilet.-Trained Mouse.' Again we have been able to benefit from a behavioral train since it is easier to change the 'toilets' regularly than the whole cage and the smell of mouse urine has been greatly reduced.

"We still have problems to overcome with all of our attempts to modify the way we keep our animals. However the technicians are enthusiastic about these approaches and so we persist. The modifications are not suitable for every situation and it is quite probable that others have developed solutions which are equally good or better. Thus the value of your journal."

European rabbits from which most of our laboratory strains have originated, are social animals often living in warrens of several hundred animals. In most laboratory situations, rabbits are kept isolated in cages which do not permit the full range of behaviour to be exhibited.

We have attempted to correct this deficiency by keeping rabbits in either large tubs which can accommodate six or more animals or in indoor/outdoor pens. Provision has been made in each casefor a covered area under which the animals can run when they are startled. 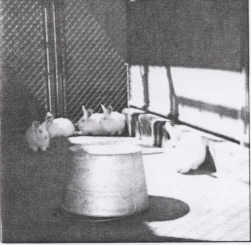 A current outside run, where rabbits have been seen piled atop each other, sunning themselves. 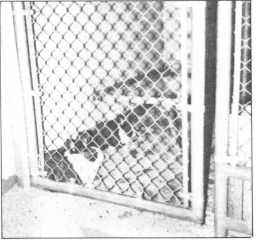 Shavings are used for bedding in the tubs, which must be deep enough to prevent the animals from springing out. Sawdust is provided in the indoor/outdoor pens in the inside only. Cleaning is required twice a week for the tubs while the pens are partially cleaned daily and totally twice each week. In the pens, the rabbits seem to urinate mostly outside and they defecate mostly close to the food dishes. By judiciously placing the food dishes, most of the feces can be kept close to the drains and so the daily cleanup is accomplished very quickly.

The rabbits are fed normal rabbit food but each day, lettuce or the leafy parts of hay are given to ensure that all the animals in each group are eating.

The rabbits in the pens and tubs are not as heavy as their more sedentary caged counterparts. They run and skip and sometimes fight although we find that rabbits which have been together from a young age fight less than the older rabbits. Additionally, younger rabbits settle down more quickly to the `open' life than do older rabbits, some of which never seem to become used to the extra space.

In both the pens and the tubs, rabbits lie together and engage in mutual grooming. The amount of loose hair is considerably less in the penned rabbits than in those where the environment is controlled. The ability to move inside or out permits more variability in the temperature range acceptable to the rabbit, a factor which the rabbit can control.

Disease problems, other than fighting injuries, appear to be less frequent than in the caged animals. Initial studies suggest that hairballs are much less common in the rabbits in tubs than those in cages. Growth is slower in the penned animals, i.e. growth gauged by weight gain. Identifying individual animals is a problem and we have not yet found the ideal technique.

Tubs are cheaper than the traditional stainless steel caging and permit greater behavioural expression by the animals. Pens are an extension of the tubs and are only applicable in certain circumstances. The animals are easy to maintain and labour costs may be considerably less than for stainless steel caging.

The requirements of the experimental design often put constraints on the type of housing suitable for our experimental animals. However, in many situations, it is possible to provide more for the animals than basic food and water and to allow them to indulge in normal behavioural activities without jeopardizing the goals of the study.

Although they have been bred in captivity for many generations, guinea pigs respond to a startle by seeking a place to hide. In providing such a place, we have been able to take advantage of this trait to help with the management of the animal.

We maintain our breeding colony, in large plastic bins suspended about 58cm above the floor. Each bin has one male and five females. The bins, which measure 150cm x 90cm x 48cm, have a hole in one end through which the shavings can be swept into a garbage pail.

Initial attempts to provide the animals with a covered area for refuge showed that the guinea pigs adopted the shelter very quickly and would dart under cover when startled. We soon realized that this was a most useful behaviour when it came to catching the animals in these large bins.

We constructed boxes as shown in the photograph. They measure 61 cm x 42cm x 30cm and have a floor and a removable top. The sliding door show is not present except as required. The door opening was made so that heavily pregnant guinea pigs could still go in and out without difficulty. The floor is flush without any obstructions to make cleaning difficult, and the boxes pass through the cage washer.

Catching the guinea pigs is a matter of closing the door once they scamper inside and opening the top of the box. This eliminates the scramble which occurred previously. During cleaning, the box full of guinea pigs is lifted out of the bin.

Once they are used to the boxes, the guinea pigs often dart to the door when they are startled and then look back for the cause of the panic. Pregnant females give birth in the boxes and the young often do not emerge until they are about five days old. However the young may be checked by lifting the lid. 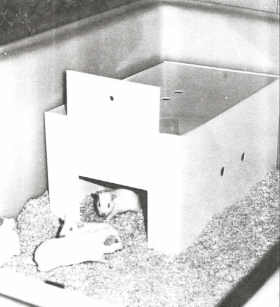 The advantages of the boxes include:

There are some potential disadvantages namely:

As part of an overall effort to improve the housing of laboratory animals, small plastic water bottles were added to mouse boxes to determine if they could provide some novelty in the environment. In some cases, the bottles were added inside the box and in some cases they were added to the outside with only the neck of the bottle protruding into the box. Both large and small mouse boxes were used. It quickly became apparent that the mice would use the bottles either as urinals or for nesting. Generally, if there was a single bottle and a double in a cage, the single was used as a urinal while the double was used as a nest and bolt hole. The mice carried the nesting material in themselves.

The greatest acceptance occurred in the larger mouse boxes with the bottles in the inside. Small boxes with inside bottles or outside bottles received limited acceptance. Pregnant mice delivered inside the nesting bottle and the young remained there for the first two weeks. The "urinals" were used exclusively once they were adopted and this took from one to four days for naive mice. An experienced mouse with the naive mice shortened the learning period. If, however, the urinals were not cleaned and a pool of urine accumulated, the mice blocked the entrance with sawdust and proceeded to urinate in the corners of the box. Swiss Webster. Balb/c and C57Bl/6 mice all used the bottles in the same way.

The smell of ammonia from mouse boxes is one of the problems in the animal house. Frequent changing of cages will minimize the odor but increases the labour. The unexpected benefit from this trial was that the smell was considerably lessened since the urine was contained in the urinals and was generally free from fecal contamination. the source of urea splitting bacteria. Changing the bottles was much less laborious than changing the cages. Cages were changed much less frequently with less disturbance to the animals.

Checking the mice in the nesting bottle was a little difficult. From the photograph, the nesting bottle can be seen to be the two "urinals" end to end. The bottoms had been removed and the bottles were held together with tape on two sides. It was possible to release the tape from one side and with the other acting as a hinge, to open the nest and examine the contents. This needs further work as the mice chew at the tape eventually.

We feel that the provisions of the nesting bottles and urinals has provided the animals with some novelty in their environment and has had advantages from a management viewpoint. Our cage size for the "toilet-trained mice" has been 19" x 10.5" x 8".

Reproduced with permission of the editor. Published in Humane Innovations and Alternatives Vol. 2, 1988, p.47-50.