Primate Housing Facilities for Pharmaceutical Research in Switzerland (An Example)

According to the Swiss Animal Welfare Legislation, the minimal enclosure area for macaques of the size of rhesus or cynomolgus monkeys for experimental purposes is 15 cubic meters. In such an enclosure up to 5 adult animals may be kept with further 2 cubic meters for each additional animal. For experimental purposes the animals may be held in individual cages temporarily but should then have access to an enclosure of the above area. The housing system, developed on the basis of our experience, combines cages with an enclosure and enables pharmacologists to use monkeys over a period of years for repeated experiments and to keep them in small groups in the interim. The system posed only minor problems, chiefly related to group incompatibility with some animals when they reached sexual maturity.

According to the Swiss Animal Welfare Legislation (Richtlinie Tierschutz, 1994) the following requirements are mandatory for housing macaques of the size of rhesus or cynomolgous monkeys for experimental purposes: social group housing at any time; structuring of enclosures and enrichment of environment and diet; daylight or artificial light comparable to daylight; minimal space requirements of 15 cubic meters for enclosures for up to 5 adult animals, with further 2 cubic meters for each additional animal. For experimental purposes the animals may temporarily be held in individual cages but should then (after maximally 7 days) have access to an enclosure of the above mentioned area. Exceptions to these requirements will be granted only if unequivocally justified.

Size of the Housing System

The animals are housed in rooms with plated walls and floors, with artificial illumination close to daylight spectrum (cycle 12h/12h), an environmental temperature of 22-24ºC and a humidity of 40-70 %.

The system was developed within the company for housing rhesus monkeys in the early eighties and gradually improved thereafter. It consists in principle of a row of five cages on both sides of a room connected to an indoor enclosure with the area of approximately 34 cubic meters or 47 cubic meters. These enclosures can be divided into two smaller compartments of 17 cubic meters and 24 cubic meters. Thus the smallest compartments would allow us to keep 6, the largest to keep 20 rhesus monkeys in a group according to Swiss animal welfare regulations. From experience we consider the latter group size to be too large in confined conditions. Particularly when adult males are housed in single sex groups, there is not sufficient room and structure to escape from aggression. The normal group size rarely exceeds 5 animals in the smaller enclosures and 10 animals in the large because we tend not to have more animals in a group than cages available for individual isolation.

The enclosures are equipped with horizontal wooden bars and vertical tubes of stainless steel for climbing, shelves along the walls and suspended crates or barrels for hiding and playing. In addition, an tensile pole (either the mast of a surfboard or part of a high jump pole) is provided which is used by the animals for "rocking the branch". Recently windows have been introduced between adjacent rooms, which allows the animals to fulfill their curiosity and partly compensates for the lack of windows to the outside. We find that distraction reduces the frequency and severity of fights within a group.

Normally the animals stay in the enclosure or enter the cage row to which they have free access. During the morning when the rooms are cleaned the animals are locked individually in the cages where they receive their daily pellet ration of a complete primate diet and some fruit (eg. apples, bananas, oranges). After about an hour, when the rooms have been cleaned and fresh wood granulate and a handful of straw or twigs has been strewn, those animals that are not to be used in an experiment are again released into the enclosure. In the afternoon a limited ration of vegetables is given as well as a handful of grain (eg. rice, wheat) or popcorn, or dried grapes which is foraged for in the wood granulate. The amount of supplementary food for enrichment is kept low in order to avoid dominant animals losing interest in the complete diet pellets. Tap water is available at all times from nipples placed in the enclosure and in each cage. 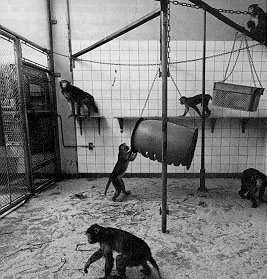 Fig. 1 (Nr. 960175-2/4): Inside view of a large enclosure for 10 - 12 rhesus macaques equipped with nipple for tap water, horizontal and vertical poles, a barrel and a crate for hiding and playing. There is a tensile rod at right. Two animals are foraging in the wood granulate. Note the access to the cage row on the far left.

The suspended stainless steel cages were developed on the basis of a design used at the Laboratory for Experimental Medicine and Surgery in Primates/USA in the seventies. The dimensions are 60x80cm and a height of 120cm. The lower part of the front can be pushed backward and upwards so as to confine the monkey to the upper half of the cage. In the upper part the back wall can be pulled forward to squeeze the animal against the front door, in which some of the bars can be pushed upward to allow for better access to the animal. These cages are used to isolate animals during feeding time, or for preparing animals for an experiment (food deprivation, blood sampling, sedation etc.). If animals have to be transported to a laboratory, the cage is unhooked from the wall and transported on a trolley. If animals are to be confined to the cage for a longer time, double the cage size is required. For this purpose the side walls of the newer cages can be removed allowing us to use two adjoining cages as one. The isolated monkey can thus be kept in sight of the colony it belongs to. 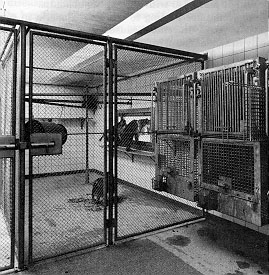 Fig. 2 (Nr. 960175-9): View of a small enclosure for 5-6 rhesus macaques. To the right two cages of the row of 5 are visible. As individual cages they are used for catching, feeding and transporting. For prolonged confinement of individual animals a double cage is required. The window between two rooms as seen in the rear has proven to be beneficial in distracting the animals from internal disputes.

The colonies are usually put together as compatible groups of single sex. Wherever possible male and female groups are not held in the same room. Normally a group is started with young animals at about two years old, a time when intra group aggression does not pose a problem. Since compatibility has priority, it is rare that all animals in one group belong to the same lab. As the groups grow older, group composition may change due to elimination of animals for experimental reasons, but also due to the need for removal of incompatible animals from the group. In such cases it was found that it is possible to introduce new animals up to 2 years old into an existing group provided they are not introduced as single animals and an accepted dominant animal already exists in the group. It was also found possible to put young animals together with single "incompatible" animals removed from other groups, or set a vasectomized male into a female group.

The main problems encountered with our total colony of 110 animals (20 groups) are:

Bite and scratch wounds which need treatment at an average of 1-2 cases a week. To reduce the severity of these lesions the canines of the males are blunted.

Incompatibility of individual animals when they reach sexual maturity. This requires removal of the animal from the colony (about 2-4 animals a year). Normally these animals cannot be introduced into another colony but they may be associated with another single animal or with a group of subadults.

Hair loss of varying degree, sometimes leading to complete alopecia in some animals. Since no, parasitic or other infectious causes were found, and the symptom occurred repeatedly in subdominant animals, this finding is considered to be related to stress situations within the group.

Symptoms of dietary deficiency. These were observed mainly in dominant animals hoarding too much supplementary food supplied in excess (fruit and vegetables). This was avoided by rationing fruits and vegetable.

Conclusion
With the system presented above, rhesus macaques have been kept for years in social groups for repeated short term experiments. The oldest monkey in the facility - a dominant male with an even character, no longer used experimentally - is now more than 25 years old.

It seems possible, therefore to successfully house rhesus macaques in single sex groups for repeated short term experiments according to the Swiss Animal Welfare Legislation. How far the system can be adapted to long term experiments with daily drug administration, frequent investigations, and possible chronic drug effects, remains to be proven.

This article originally appeared in Primate Report 49, 19-22, 1997.
Reprinted with permission of the Editor.