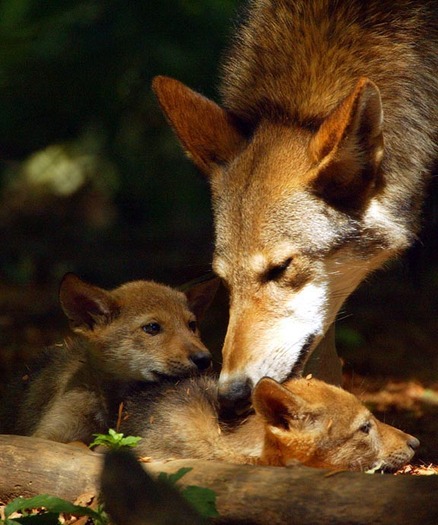 Chapel Hill, North Carolina—Conservation and animal welfare organizations, including the Animal Welfare Institute (AWI), Defenders of Wildlife, and the Red Wolf Coalition, as represented by the Southern Environmental Law Center (SELC), notified the US Fish and Wildlife Service (USFWS) today of their intent to sue the agency for illegally authorizing a private landowner to kill breeding red wolves and failing to undertake the legal analysis required by the Endangered Species Act (ESA). The notice letter details the agency’s active role in allowing the illegal take of several red wolves and failing to protect the world’s only wild population of these wolves.

Specifically, the USFWS failed to use non-lethal methods to remove the wolves from private property. Instead, the agency authorized the killing of the wolves, which is a direct violation of the ESA.The ESA prohibits the unauthorized killing of endangered species, like the red wolf, which has been listed for protection since the ESA’s inception in 1973. Although the USFWS is granted authority to issue take permits under very limited circumstances, none of these circumstances were present prior to the killing of these particular wolves.

“It is nonsensical for the USFWS to haphazardly authorize the killing of a mother red wolf when the population is in serious danger,” said Tara Zuardo, wildlife attorney at AWI. “There is no evidence that this wolf was causing any harm, or that the agency previously tried to humanely move her off the property. To our chagrin, it appears that you can get a permit to kill coyotes—or to kill red wolves—so long as you apply to the right agency.”

Tracking data showed that at least one of the killed wolves was exhibiting denning behavior, indicating that she had pups. The loss of any breeding adult red wolf is a significant setback to recovery of this species. However, the loss of this specific mother red wolf—also known to be lactating at the time she was killed—will have exceptionally far-reaching effects on the population’s ability to recover. The slain wolf was six years old and had four previous litters.

The notice of intent also indicates that the USFWS has failed to conduct a five-year status review of the red wolf—as required by the ESA—to inform recovery and management efforts. The last five-year status review conducted by the USFWS occurred in 2007, with another due in 2012. Despite its failure to conduct such a review, the USFWS announced in June that it would suspend the reintroduction of red wolves into eastern North Carolina. Such reintroductions have been critical to maintaining the status quo of the population and are an integral part of the agency’s own adaptive management plan.

“As the USFWS moves forward with its assessment of the Red Wolf Recovery Program, they should not forget their commitment and obligation to the health and welfare of the wild red wolves that live in northeastern North Carolina,” said Red Wolf Coalition executive director Kim Wheeler.

“The USFWS has violated the law and its responsibility to protect the world’s only wild population of red wolves, which now contains only 50-75 individuals,” said Sierra Weaver, senior attorney for SELC, which represents the conservation groups in the 60-day notice of intent to sue the agency. “The USFWS must rededicate itself to ensuring the survival of America’s rarest wolf and restore the former successful recovery of this endangered species.”

The red wolf (Canis rufus) is one of the most endangered mammals in all of North America. North Carolina is home to the only wild population of the species. Red wolves bred in captivity were reintroduced on a North Carolina peninsula within their native range in the late 1980s after the species was declared extinct in the wild. Once common throughout the southeastern United States, intensive predator control programs and loss of habitat decimated wild red wolf populations.

“The USFWS needs to step up work to help this species get back on the road to recovery, not stop releasing wolves,” said Jason Rylander, senior attorney for Defenders of Wildlife. “Red wolves are endangered because they need protection and effective management to thrive. Allowing the killing of a breeding female wolf is the exact opposite of managing red wolves for recovery.”

Photographs of red wolves in North Carolina are available for use with appropriate photo credit from the US Fish & Wildlife Service at http://www.fws.gov/redwolf.

About the Animal Welfare Institute
The Animal Welfare Institute is a nonprofit charitable organization founded in 1951 and dedicated to reducing animal suffering caused by people.  AWI engages policymakers, scientists, industry, and the public to achieve better treatment of animals everywhere—in the laboratory, on the farm, in commerce, at home, and in the wild. For more information, visit www.awionline.org.

About the Southern Environmental Law Center
The Southern Environmental Law Center is a regional nonprofit using the power of the law to protect the health and environment of the Southeast (Virginia, Tennessee, North and South Carolina, Georgia, and Alabama). Founded in 1986, SELC's team of nearly 60 legal and policy experts represent more than 100 partner groups on issues of climate change and energy, air and water quality, forests, the coast and wetlands, transportation, and land use. www.SouthernEnvironment.org