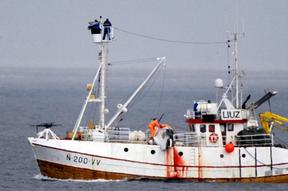 Washington, DC—Whale meat shipped from Norway to Japan contains levels of harmful pesticides—including aldrin, dieldrin and chlordane—that violate human health standards established by the Japanese government, according to tests conducted by the Japan’s Ministry of Health, Labor and Welfare.

Over the past two years, Norway has increased exports of minke whale products, shipping more than 137 metric tons of whale meat and blubber to Japan for human consumption.

However, according to documents recently obtained by the Animal Welfare Institute (AWI) and the Environmental Investigation Agency (EIA), Japanese health officials raised concerns about shipments from two Norwegian exporters, Brødrene Astrup Andreassen A/S and Myklebust Hvalprodukter, and recommended the products be returned or abandoned.

“Norway is entirely too focused on making whaling profitable,” said Susan Millward, executive director of AWI, “and, as a result, is ignoring the potential harm the whale products pose to its own citizens and those in other countries.”

“Japan is right to take action to prevent the import of toxic Norwegian whale meat, said Clare Perry, head of EIA’s Oceans Campaign. “However, it should also look to its own coastal cetacean hunts, which provide thousands of tons of toxic whale and dolphin products for unsuspecting Japanese consumers, putting them at increased risk of serious diseases, including Parkinson’s disease, arteriosclerosis and diabetes.”

This is not the first time that Norwegian whale meat has been the focus of health concerns in Japan. In 2009, whale meat exported by Olavsen A/S and Myklebust Hvalprodukter was rejected for sale in Japan because it contained levels of live bacteria in excess of permitted levels.

Norwegian demand for whale meat has fallen in recent years. To boost domestic sales, and with an eye on new export markets, both the Norwegian government and its whaling industry are subsidizing research, development and marketing of new whale-derived products.

AWI and EIA call on the government of Norway to stop supporting research into alternative uses for whale meat and blubber, and to immediately accept the international bans on commercial whaling and trade in whale products.

About the Animal Welfare Institute
The Animal Welfare Institute (AWI) is a non-profit charitable organization founded in 1951 and dedicated to reducing animal suffering caused by people. AWI engages policymakers, scientists, industry, and the public to achieve better treatment of animals everywhere—in the laboratory, on the farm, in commerce, at home, and in the wild. For more information on AWI, visit www.awionline.org.

Editors Notes:
Norwegian whalers killed 736 minke whales in 2014, more than in any year since the country resumed commercial whaling in 1993. The 2014 hunt yielded a record 871 metric tons of whale meat. On March 5, 2015, Norway’s Minister of Fisheries Elisabeth Aspaker announced that the 2015 whaling quota would remain unchanged from the previous year’s quota of 1286.  In her press statement, Minister Aspaker referred to the need to facilitate favorable conditions for the whaling industry.

Over the past two decades, Norway’s whaling industry has benefited from both government and corporate investment into research and development of whale oil for pharmaceutical and health supplement applications, as well as for animal feed.  Millions of kroner have been spent on projects such as developing “a new value production chain based on the utilization of minke whales,” “chemical testing of whale oil and comparisons with previous blubber products” and “developing new forms of revenue and promotion of whale and seal products.”  (Source www.nifes.no)

The International Whaling Commission (IWC) moratorium on commercial whaling was agreed to in 1982 and took effect as of 1986. Norway lodged a legal objection to that decision and in 1993 resumed commercial whaling. The IWC passed a resolution in 2001 calling on Norway to halt all whaling activities. Norway’s self-allocated quotas for whales are not approved by the IWC.