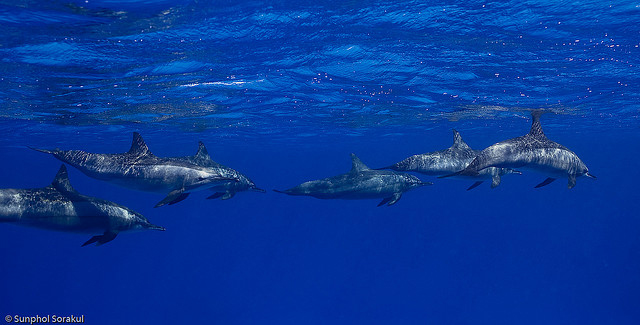 For the first time, the Navy has agreed to put important habitat for numerous populations off-limits to dangerous mid-frequency sonar training and testing and the use of powerful explosives. The settlement aims to manage the siting and timing of Navy activities, taking into account areas of vital importance to marine mammals, such as reproductive areas, feeding areas, migratory corridors, and areas in which small, resident populations are concentrated.

Many of the conservation organizations who brought the lawsuits have been sparring legally with the Navy and the National Marine Fisheries Service—the agency charged with protecting marine mammals—for more than a decade, demanding that the Navy and Fisheries Service comply with key environmental laws by acknowledging that the Navy’s activities seriously harm marine mammals and taking affirmative steps to lessen that harm.

“We can protect our fleet and safeguard our whales,” said Rhea Suh, president of the Natural Resources Defense Council (NRDC), whose lawyers challenged the Navy’s activities in Southern California and Hawai‘i on behalf of NRDC, Cetacean Society International, Animal Legal Defense Fund (ALDF), Pacific Environment and Resources Center (PERC), and Ocean Conservation Research director Michael Stocker. “This settlement shows the way to do both, ensuring the security of U.S. Navy operations while reducing the mortal hazard to some of the most majestic creatures on Earth. Our Navy will be the better for this, and so will the oceans our sailors defend.”

“If a whale or dolphin can’t hear, it can’t survive,” saidDavid Henkin, an attorney for Earthjustice, who brought the initial challenge to the Navy’s latest round of training and testing on behalf of Conservation Council for Hawai‘i (CCH), the Animal Welfare Institute (AWI), the Center for Biological Diversity, and the Ocean Mammal Institute (OMI). “We challenged the Navy’s plan because it would have unnecessarily harmed whales, dolphins, and endangered marine mammals, with the Navy itself estimating that more than 2,000 animals would be killed or permanently injured. By agreeing to this settlement, the Navy acknowledges that it doesn’t need to train in every square inch of the ocean and that it can take reasonable steps to reduce the deadly toll of its activities.”

Scientific studies have documented the connection between high-intensity mid-frequency sounds, including Navy sonar, and serious impacts to marine mammals ranging from strandings and deaths to cessation of feeding and habitat avoidance and abandonment. Nonetheless, until now the Navy has refused to set aside biologically important areas to minimize such harm to vulnerable marine mammal populations.

Until it expires in late 2018, the agreement will protect habitat for the most vulnerable marine mammal populations, including endangered blue whales for which waters off Southern California are a globally important feeding area; and numerous small, resident whale and dolphin populations off Hawai‘i, for which the islands are literally an oasis, their only home.

“This settlement proves what we’ve been saying all along,” said Marsha Green, president of OMI. “The Navy can meet its training and testing needs and, at the same time, provide significant protections to whales and dolphins by limiting the use of sonar and explosives in vital habitat.”

“This agreement will enhance the welfare of dozens of species that call the Pacific Ocean home by extending vital protections to places they need to rest, feed, reproduce and care for their young,” said Susan Millward, executive director at AWI.

Southern California provides some of the most important foraging areas anywhere on the globe for vulnerable species such as endangered blue and fin whales, and contains important habitat for small populations of beaked whales, a family of species that is considered acutely sensitive to naval active sonar, with documented injury and mortality.

“Numerous beaked whale strandings and deaths have been linked to naval uses of high-intensity sonar,” said Bill Rossiter, executive director for advocacy, science & grants of Cetacean Society International. “Now, beaked whale populations in Southern California that have been suffering from the Navy’s use of sonar will be able to find areas of refuge where sonar will be off-limits.”

Key terms of the settlement applicable to Southern California include:

“Ship strikes pose a serious risk to blue whales and other large whales off the coast of California,” said Stephen Wells, executive director of ALDF. “We expect this settlement will help save lives by lowering that risk when Navy vessels reduce their speed in important blue whale habitat and migratory corridors.”

In the vast Pacific Ocean, Hawai‘i represents an oasis for numerous, vulnerable populations of toothed whales, such as spinner dolphins, melon-headed whales, and endangered false killer whales. Studies have shown that they are distinct from other populations in the tropical Pacific and even, in some cases, from populations associated with other islands, with only a few hundred individuals in existence. The Big Island of Hawai‘i and the Maui 4-Island Complex host many of these populations.

“Some of the marine mammals threatened by Navy activities are already on the brink of extinction, such as the Hawaiian monk seal, our state mammal and one of the world’s most endangered species,” said CCH executive director Marjorie Ziegler. “This settlement helps protect marine habitat the Fisheries Service just last month identified as essential to the seal’s survival.”

Key terms of the settlement applicable to Hawai‘i include:

“This is a huge victory for critically endangered species like Hawai‘i’s insular false killer whale, which is down to only about 150 animals,” said Miyoko Sakashita, oceans director at the Center for Biological Diversity.

Under the Navy’s five-year plan for training and testing, the Navy is permitted to harm whales, dolphins, and other marine mammals nearly 9.6 million times while conducting high-intensity sonar exercises and underwater detonations. These harmful impacts include millions of instances of temporary hearing loss and significant disruptions in vital behaviors, such as habitat abandonment, as well as permanent hearing loss, permanent injury, and more than 150 deaths.

In March, the U.S. District Court, District of Hawai‘i, found that the U.S. Navy and the National Marine Fisheries Service violated the law when they failed to meet multiple requirements of the Marine Mammal Protection Act, the Endangered Species Act, and the National Environmental Policy Act when authorizing the Navy’s plan.

Ocean noise is one of the biggest threats worldwide to the health and well-being of marine mammals, which rely on sound to ‘see’ their world. Navy sonar activities, shipping noise, and seismic exploration by oil and gas companies have made our oceans noisier in recent decades, resulting in widespread disruption to feeding, communication, mating, and more. Southern California and Hawai‘i represent two of the Navy’s most active ranges for mid-frequency sonar and explosives use.

In March 2014, the NRDC case was transferred to the District of Hawai‘i, which consolidated the two cases. Today’s order settles both cases.