The Myth of the Aggressive Monkey

Captive rhesus macaques are not naturally aggressive, but poor husbandry and handling practices can trigger their aggression toward conspecifics and toward the human handler. The myth of the aggressive monkey probably is based on often not taking into account basic ethological principles when managing rhesus macaques in the research laboratory setting.

Macaca mulatta is the most common nonhuman primate species found in biomedical research facilities in the United States. Of the 57,000 or so primates (United States Department of Agriculture, 2000), approximately 33,000 (58%) animals are rhesus macaques (National Center for Research Resources, 2002) of whom an estimated 16,500 (50%) are living in cages.

Traditionally, rhesus macaques have the reputation of being particularly aggressive animals who are best kept in solitary confinement and handled with enforced restraint. Bernstein, Gordon, and Rose (1974) observed that "rhesus monkeys in the laboratory have well-earned reputations for their aggressive response and near-intractable disposition" (p. 212). Gisler, Benson, and Young (1960) warned that "the rhesus monkey is extremely nervous and energetic and is difficult to house. Unquestionably, animals involved in experiments should be housed in individual cages" (p. 760). Line (1987) cautioned that "any plan to increase social interaction also increases the risk of injury and death" (p. 858). According to Ackerley and Stones (1969), "all monkeys are dangerous" and "should not be handled in the fully-conscious state" (pp. 207, 211). Underscoring that one of the major drawbacks to the use of rhesus macaques is that "they can be difficult and even dangerous to handle," Robbins, Zwick, Leedy, and Stearns (1986) stated that "restraint is therefore necessary and desirable to protect both the investigator and the animal," but cautioned that "often the animal is uncooperative because of adverse conditioning or fear" (p. 68). Valerio, Miller, Innes, and Courntey (1969) also pointed out that the rhesus monkey is "an agile, unpredictable, and often vicious creature with sharp teeth. Personnel must wear heavy protective clothingparticularly glovesto protect against bites" (pp. 4445). The authors added a warning that "despite rigorous observance of all precautions, bites and scratches are frequent" (p. 45). Whitney, Johnson, and Cole (1973) however, contended that "the risk of herpes virus B infection and other zoonoses transmitted by bite or scratch is minimized by appropriate restraint which may be physical or chemical or a combination of the two" (p. 50). Henrickson (1976) and Wickings and Nieschlag (1980) underscored that male rhesus macaques are particularly difficult and dangerous, making it quasi-imperative to use physical or chemical restraint when handling them. The assumption that chemical restraint with ketamine avoids stress reactions does not hold true unless the subject has been trained to cooperate during ketamine injection. Traditionally, rhesus macaques are forcibly immobilized during injection (Ackerley & Stones, 1969), a circumstance that introduces stress as an uncontrolled variable (Aidara, Tahiri-Zagret, & Robyn, 1981; Crockett, Shimoji,& Bowden, 2000; Loomis, Henrickson, & Anderson, 1980; Streett & Jonas, 1982) even before the actual experimental procedure has started. 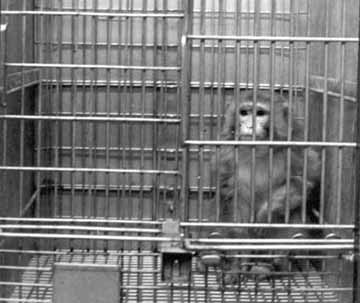 Figure 1. Rhesus macaques are typically force-restrained - here in the so-called squeeze cage - during common procedures such as blood collection. 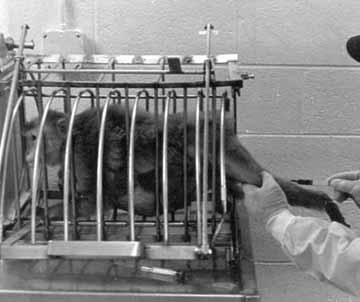 Figure 2. Rhesus macaques used for research and testing are typically housed in single-cages.

During handling procedures, rhesus macaques are typically restrained manually on tables or mechanically in specially designed cages, boxes, or chairs. There is ample scientific evidence that such enforced restraint techniques are a source of stress (Reinhardt, Liss, & Stevens, 1995). It is only commonsense that animals will not respond normally if they are stressed (Schwindaman, 1991). "Stressed animals do not make good research subjects" (American Medical Association, 1992, p. 18).

Solitary housing and enforced handling introduce uncontrolled extraneous variables, thereby increasing data variability and hence the number of research subjects needed to achieve statistically significant results (Brockway, Hassler, & Hicks, 1993; Home Office, 1989; Schnell & Gerber, 1997; Woolley, 1997). The National Research Council (1996) aptly reminded investigators that proper housing and management of laboratory animals "minimizes variations that can affect research results" (p. 21). Federal regulations require that "handling of all animals shall be done in a manner that does not cause behavioral stress, physical harm, or unnecessary discomfort" and that "the environmental enhancement plan must include specific provisions to address the social needs of nonhuman primates of species [such as rhesus macaques] known to exist in social groups in nature" (United States Department of Agriculture, 1995, pp. 21, 75). The National Research Council (1998) reiterated these basic requirements:

To reduce the stress of physical or chemical restraint, many primates can be trained for routine procedures. Procedures that reduce reliance on forced restraint are less stressful for animals and staff, safer for both, and generally more efficient. Social interactions are considered to be one of the most important factors influencing the psychological well-being of most nonhuman primates. The common practice of housing rhesus monkeys singly calls for special attention. Every effort should be made to house these animals socially (in groups or pairs), but when this is not possible, the need for single housing should be documented by investigators and approved by the IACUC [Institutional Animal Care and Use Committee]. (pp. 40, 45, 99)

I questioned the rhesus macaque's bad reputation in a colony of animals used for research who were originally housed in the conventional single-cage system and handled with traditional, enforced restraint techniques. Applying basic ethological principles, the colony was transferred (Figure 3) to permanent compatible pair housing arrangements (Reinhardt, 1994), and several animals were successfully trained (Figure 4) to cooperate voluntarily during blood collection (Reinhardt, 1991). 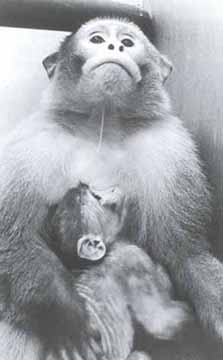 Figure 3. Rhesus macaques - here an adult male with his little companion - are not too aggressive to share a cage with a compatible conspecific. 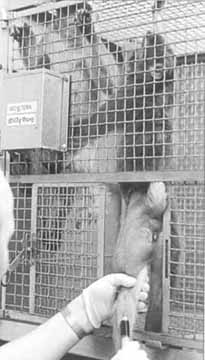 Figure 4. Rhesus macaques - here an adult female - are not too aggressive to be trained for voluntary cooperation during common procedures such as blood collection.

Pairs were incompatible due to aggression in only 6% (45 pairs) of cases. Males were no less tolerant of their companions than females (Figure 3). Only 0.7% of the animals (4 adult females, 2 adult males) were inflicted with serious, but not life-threatening lacerations resulting from aggressive disputes. This low incidence of aggressive incompatibility questions the assumption that injuries are "unavoidable" (Rosenberg & Kesel, 1994, p. 470) when adult rhesus monkeys are introduced to each other and that "there is a strong likelihood that the veterinarian will be kept quite busy suturing wounds" (Coe, 1991, p. 79) when new pairs are formed. If done correctly, pair formation of caged rhesus macaques is a reasonably safe option to address the animals' social needs as mandated by the regulations.

With positive reinforcement, 39 adult female and 15 adult male rhesus macaques were trained to voluntarily present a leg for blood collection in their home cages. Most of the animals lived in pairs (n = 46), but some lived alone (n = 8), during the training process. Less than a cumulative total of 1 hr was spent per animal to achieve the goal of the training (Figure 4). Neither female nor male subjects attempted to scratch or bite the trainer, who interacted with them in a predictable, patient, and gently firm manner. Unlike forcibly subdued animals, the trainees had no reason to show aggressive defense reactions. Once trained, all animals also cooperated during venipuncture with the attending caretakers and veterinarians. No trained monkey inflicted an injury on the handling personnel during blood collection.

The idea of training rhesus macaques in the research laboratory is not new. Several authors have mentioned that their animals had been trained to cooperate during capture, injection, and blood collection (Reinhardt, 1997).

These findings strongly contradict the belief that rhesus macaques are too aggressive to be housed in pairs and to be trained to cooperate during procedures. Several hundred animals of both sexes were transferred from single caging to compatible pair housing arrangements without undue problems related to aggression, and more than 50 animals of both sexes were trained to cooperate during venipuncture without the occurrence of injuries. There was no evidence that the rhesus macaque is particularly aggressive toward a compatible cagemate or toward the handling personnel.

The myth of the aggressive rhesus macaque probably is based on unsuccessful attempts at socializing individually caged animals and on the relatively frequent occurrence of scratch and bite wounds inflicted on personnel during enforced handling procedures (Zakaria, Lerche, Chomel, & Kass, 1996). Because rhesus macaques far outnumber any other nonhuman primate species in the research laboratory, aggression-related accidents caused by them are of relatively much higher concern and, therefore, are bound to draw more attention than aggression-related problems caused by other species.

It stands to reason to ask the question: Are rhesus macaquesor for that matter any other nonhuman primatesspontaneously aggressive, dangerous, or even vicious; or are the conditions under which we manage and handle them responsible for their becoming aggressive or defensive? This report demonstrates that pair formation and training procedures are not intrinsically circumstances in which rhesus macaques are aggressive. However, such circumstances can provoke aggression under conditions that fail to take the animals' ethological and emotional needs into account:

1. Any two strange, social, adult animalsincluding rhesus macaqueswill establish a dominancesubordinance relationship on introduction to each other. Macaques typically fight over dominance, and they may injure each other seriously when spatial restrictionsuch as a cagemakes it impossible for the loser to run away and break visual contact with the victor. To form a pair from unfamiliar macaques by simply releasing the two partners into a cage is an unnatural and potentially strong trigger of aggression (Maxim, 1976). Aggression during pair formation is effectively avoided by first allowing the two strange partners to establish their dominancesubordinance relationship during a brief (less than 24 hr) noncontact familiarization period. If they then are released into a cage, they have no reason to fight over dominance (Reinhardt, 1989).

2. Humans are potential predators for rhesus macaques. The animals will try, therefore, to defend themselves by means of scratching or biting whenever they feel threatened by a person. Handling procedures such as blood collection are frightening, often life-threatening situations that can easily trigger aggressive defense reactions. Training rhesus macaques to cooperate during procedures makes these defense reactions superfluous because the trainer has developed and fostered a relationship based on trust rather than fear, and the animal is partially in control rather than coerced during the interaction with the handler (Reinhardt, 1991).

Captive rhesus macaques are not naturally aggressive, but poor husbandry and handling practices can trigger their aggression toward conspecifics and toward the human handler. The idea that rhesus macaques are very aggressive animals is probably based on the fact that basic ethological principles are often not taken into account when managing rhesus macaques in the research laboratory setting. To use this myth in defense of single caging and enforced handling is scientifically and ethically not tenable because it hinders the refinement of stressful, data-biasing husbandry practices.

Rhesus "monkeys are socially complex creatures. When this aspect of their nature is accommodated in research settings, the benefit to science is a less stressed animal that provides meaningful scientific data" (Novak & Bayne, 1991, p. 307). By making the shift to positive reinforcement training "the welfare of the animals is significantly enhanced while providing better (less stressed) research models for the biomedical community" (Laule, 1999, p. 26).

Woolley, A. P. A. H. (1997). Requirements of biomedical research in terms of housing and husbandry for non-human primates: Pharmacology & toxicology. Primate Report, 49, 3741.