On 1 September, Monkey World - Ape Rescue Centre was given the 1998 Universities Federation for Animal Welfare (UFAW) Zoo Animal Welfare Award for the Woolly Monkey Habitat. We were honoured to have the award presented by Dr Jane Goodall, CBE, and Dr James Kirkwood, Scientific Director, UFAW. At present, we have six (2.4) woolly monkeys (Lagothrix lagotricha): (See Table 1.)

We developed the designs for the Woolly Monkey Habitat in house. Many of our ideas came from Apenheul Primate Park in the Netherlands, and we also based our designs upon our practical husbandry background and the available woodland environment. The house was designed to give the animals security and provide them with a suitable habitat in a temperate zone. In the roof, we included six panels of triple-walled polycarbonate sheets, creating a greenhouse environment, which is warm and humid. The ceiling is A-framed and the monkeys have access to the beams, which increase their climbing surface area. There are four back bedrooms, which are connected to a large, open playroom by two tunnels. This gives the woolly monkeys small, secure areas as well as a large, public playroom. One of the bedrooms is located off the keepers' kitchen, and a large observation window gives the keepers an area where they can keep a close eye on any individuals who may need medical care. As it has turned out, the monkeys seem to enjoy watching the keepers!

We have also incorporated five feeding trays into the wire mesh of the playroom. The trays slide in and out of the enclosure, giving the monkeys several feeding sites and thus reducing stress at feeding time. The main playroom is deep-littered with bark chips and wetted down each day. Blown gas heating was chosen as it creates a moister environment, and as a result grass and sunflower seeds grow inside the house. The playroom measures 4 m x 11 m x 4 m and the four bedrooms total 11 m x 1.5 m.

The outdoor enclosure was designed to give the woolly monkeys a natural, arboreal environment. A large stand of conifer trees was enclosed by a special monkey-proof fence (it is too slippery to climb). The enclosure has a perimeter of 180 m and has herb gardens, ropes connecting all the trees, and suspended feeding trays. We also added a special snake-proof lining around the base of the enclosure to keep adders out. 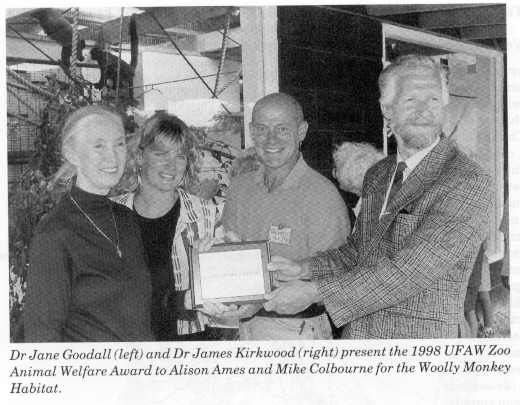 The monkeys receive four feeds per day between the hours of 08.30 and 16.30. Their diet is extremely diverse and specially selected due to their sugar intolerance (see Table 2 [not reproduced]). The items are selected based upon their fiber content, length and digestibility. We choose foods high in fiber, both digestible and indigestible, which slows the release of sugars into the blood stream. Captive woolly monkeys are renowned for suffering from diabetes, hypertension, necrotic placenta, kidney disease and heart failure. These problems are not so surprising if one considers the Pima Indians of Arizona. They too suffer from diabetes, and related medical conditions, as a result of their inability to produce enough insulin on a 'Western' diet, high in readily available sugars. The Mexican Pima Indians, however, do not suffer from these medical conditions as they have remained on a traditional diet which is high in fiber. Like the Arizona Pimas, captive woolly monkeys have medical conditions as a response to an inappropriate diet. Furthermore, the gross anatomy of the woolly monkey shows that they have a functioning caecum (see Figure 1 [not reproduced]), as described by Osman Hill (Hill, 1962). This indicates that we are keeping a primate which is well suited to digesting large quantities of plant materials that are of low nutritional value. If these aspects of the woolly's anatomy and physiology are ignored and they are fed a diet high in sugars and low in fiber, we would expect the resulting diabetic tendencies. At present, conditions which become chronic in captive woolly monkeys are considered species-specific diseases and not the result of inappropriate diet.

The group is only ever separated in the event of veterinary care. For simple veterinary procedures or inspection, the monkeys are caught in the tunnels between the playroom and back bedrooms. These tunnels are used every day, so the monkeys are used to them and readily pass through them. For more serious medical treatments, individuals are separated in the playroom or in a back bedroom and darted.

Our keepers work very closely with the woolly monkeys, regularly using species-specific calls and talking to them. Some of their food. is given by hand, and they receive one sugar-free drink every day, which is given through a 50-ml syringe. As a result, the monkeys are easily medicated.

The house and enclosure were purpose-built for the woolly monkeys. They were sent to us from Apenheul when our facilities were ready. One of our keepers worked at Apenheul with these individuals prior to their arrival at Monkey World. Since Apenheul are recognised as the leading experts on woolly monkey husbandry and management, we designed a lot of our house and enclosure based upon their knowledge of the animals' needs. Since arriving at Monkey World, the woollies have been using every aspect of their new habitat. Indeed, the older female, Xuzy (27 years), has lost a great deal of weight, is more active and is regularly seen playing with the youngsters. She is also cycling regularly and is being mated by the dominant male, Kismo.

This group of woolly monkeys were selected to come to Monkey World and were introduced to each other at Apenheul prior to being sent to Dorset. Not long after their arrival, Tsjika was mated by the dominant male, Kismo. The last seen mating was on 5 June 1998, and Tsjika gave birth on 5 January 1999 (214 days later). The baby female, Rosa, is doing very well and is now starting to wander away from her mother and eat solid food. 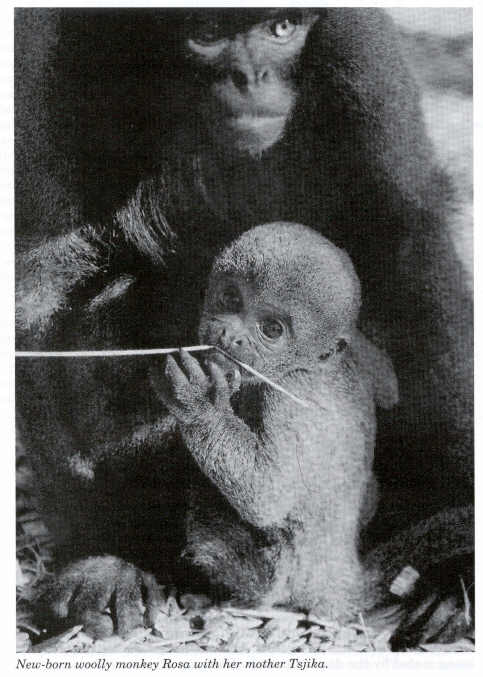 The unique design of the woolly monkey habitat incorporates many aspects of environmental enrichment. The large open playroom has ropes and shelves so that the monkeys have a substantial play area when the weather is bad outside. Specially-made canvas hammocks are also hung from the ropes, and the monkeys rest and play in them. This area is deep-Iittered with bark chips. With the sunroof, grass grows inside, giving the monkeys a complex area to forage for crickets and locusts. Rotting logs are brought in from the forest and the monkeys tear them apart looking for insects.

In the outside enclosure we have built two herb gardens. They are protected by mesh and the monkeys can pick herbs as they grow through. We maintain at least six different species of herbs in the gardens, including camomile, chives, lemon balm, garlic, etc., and other species are rotated into the garden from time to time (see Table 3 [not reproduced]). (A more lengthy list of suitable herbs can be obtained from Apenheul.) The monkeys pick the herbs according to their preference or medicinal need. They eat many of the herbs because they simply like them, others are picked less often.

Rotten and fallen trees are left in the enclosure to attract insects that the monkeys enjoy foraging for. As the enclosure is overgrown with tall grasses and heather, we have made rope pathways through the trees to increase the arboreal area, and we have also put down bark-chip pathways. While we do not want to encourage the woollies to walk on the ground, they do like to forage for insects in the fallen trees, and we noticed that they did not forage as much when they found the heather difficult to walk on.

Suspended feeding trays are hung over some branches with rope, which is secured to four corners of a wooden tray. In the mornings, the woollies' food is put in these trays and pulled up into the treetops. Because of the simple design, these feeding stations can be moved around the enclosure. The trays encourage the monkeys to feed while in the trees and while hanging by their tails. This is one of the ways in which wild woolly monkeys feed. From time to time the keepers also fill plastic balls with straw and sunflower seed, which the woollies either roll along or shake to retrieve the seeds.

In order to avoid upsetting the woollies with public disruption, they are given access to the back bedrooms at all times. In the outside enclosure, the public are kept eight feet (2.4 m) away from the fence and the stand of trees is thick enough for the monkeys to hide away if they choose.
The main educational vector for the woolly monkey habitat is a keeper's talk, which is given every day. Information about the animals, their biology, behaviour and conservation, is explained, and there is a question time. Another educational feature is our public kitchen. Through a large window, visitors can watch the keepers prepare the frequent feeds for the monkeys. There are also information boards detailing the diet, feeding routines, and background of each individual.

We believe that the unique design of both the house and the enclosure allows the woolly monkeys to exhibit very natural behaviour, and this is an educational benefit to our visitors.