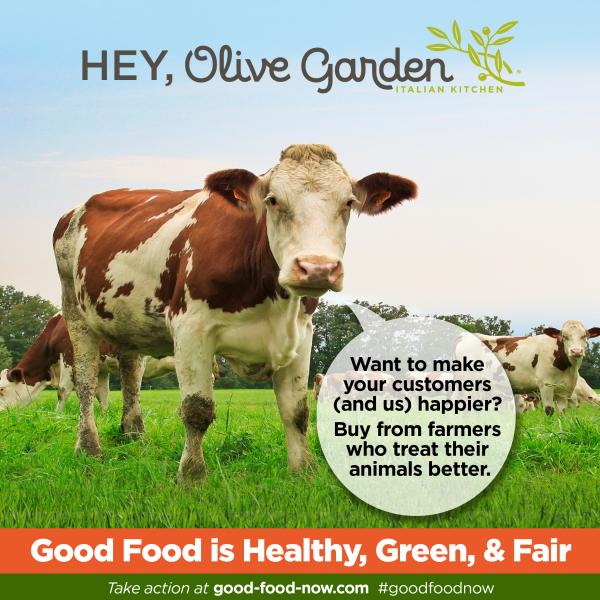 Washington, DC— A coalition of environmental, social justice, and animal welfare groups announced a campaign today calling on Olive Garden and its parent company, Darden Restaurant Inc., the nation’s largest full-service restaurant employer, to do more to protect animals, the environment and workers by substantially improving their food sourcing and labor practices.

"As the leading casual-dining operator with $6.7 billion in sales and more than 1,500 restaurants worldwide, including Olive Garden, Darden has a unique opportunity and responsibility to use its considerable purchasing power to support a healthier, fairer and more sustainable food system,” said the coalition in a collective statement. “It is clear there is a major gulf between the company’s rhetoric on strong animal and social welfare, workers’ rights and environmental protection, and the actual impacts of its food sourcing and labor management practices.We ask Darden to adopt better labor practices and greener menus that support the well-being of its customers, its workers, farmers, animals and our environment.”

The “Good Food Now!” campaign is a partnership of the Animal Welfare Institute, the Center for Biological Diversity, the Food Chain Workers Alliance, Friends of the Earth, Green America, Restaurant Opportunities Center-United, and the Unitarian Universalist Service Committee. More than 50 organizations have signed onto a letter calling for Darden to improve its labor practices and make a commitment to source 20 percent of its purchases under environmental, health, labor and animal welfare criteria aligned with the Good Food Purchasing Policy, including reducing meat and dairy purchases by 20 percent; sourcing meat from producers that adhere to verifiable, higher-than-industry animal welfare standards; and increasing local and organic options. More details of the campaign’s goals are outlined here.

The organizations are focusing on Olive Garden because the chain accounts for a majority of the sales generated by Darden Restaurants, which also owns Bahama Breeze, Seasons 52 and other popular restaurants.

“Darden claims it values and respects animals, but has shown little public commitment to improving animal welfare throughout its supply chain.” said Michelle Pawliger, farm animal policy associate at the Animal Welfare Institute. “We are asking Darden to become a leader in the restaurant arena and source its meat and dairy from producers that adhere to verifiable higher welfare standards.”

“This historic campaign is the first of its kind to bring environmental, worker justice, animal welfare and public health concerns under one umbrella.” said Kari Hamerschlag, senior program manager with Friends of the Earth. “We urge Olive Garden and Darden to meet the growing demand for better meat raised without routine antibiotics and to reduce its carbon and water footprint by putting more plant-based foods on the menu.”

“Olive Garden and Darden have the power to raise millions of workers and their families out of poverty,” said Jose Oliva, co-director of the Food Chain Workers Alliance.“ As the largest restaurant employer with a workforce of more than 150,000, we are urging Darden to raises wages and provide sick leave for its many frontline employees.”

The groups are asking their supporters to take action today by calling Darden at 1-800-331-2729 to demand “Good Food Now!” and to spread the campaign on social media using #GoodFoodNow.

The organizations previously contacted Darden in October and November 2015, asking for a meeting to discuss the campaign’s requests. However, in a written response issued in December, Darden failed to grant the meeting or acknowledge many of the key issues raised by the organizations. Core members of the campaign issued a detailed response outlining the specifics on how the restaurant company could fulfill its rhetoric on social and environmental responsibility contained in the company’s 2014 social responsibility report.

“As the world's largest full service restaurant and the world's largest employer of tipped workers, Darden could be a leader in advocating for a fair wage for all workers, but instead spends millions lobbying to keep the minimum wage for tipped workers at $2.13,”said Saru Jayaraman, co-founder and co-director, Restaurant Opportunities Center-United. “As a result we subsidize many Olive Garden and Darden workers wages with our tips,and spend billions on taxpayer-funded public assistance to support their workers' survival."

“Darden claims to be committed to ‘people, planet and plate’ but the reality of its impact on workers, the environment and the food system have fallen short,” said Stephanie Feldstein, population and sustainability director with the Center for Biological Diversity. “We’re asking Olive Garden and all Darden restaurants to take concrete steps to reduce the environmental impact of its menu like serving smaller meat portions, adding plant-based options and increasing organic foods.”

“Consumers are increasingly concerned about where their food comes from and how it was made, and restaurants are no exception," said Elizabeth Jardim, director of consumer advocacy at Green America.“Olive Garden needs to meet consumer demand by sourcing more ingredients from local farmers and paying all workers, including those in its supply chain, fairly.“

“As a major player in the restaurant industry, Oliver Garden and its parent company Darden can spearhead reforms that not only improve the working conditions for their employees, but make waves across the entire industry through leading by example,” said Phillip Hamilton, associate for Unitarian Universalist Service Committee’s Economic Justice program.

For more information on the campaign, visit www.Good-Food-Now.com.