The impossible housing and handling conditions of monkeys in research laboratories

I used to associate cruelty against monkeys with pictures of individual animals subjected to experimental procedures that obviously inflicted extreme pain. Personally I see no ethical justification for any research which inflicts pain, distress or suffering on animals, and primates in particular. However, this type of research is a given reality and as long as it continues, I feel a strong obligation to at least promote refinement techniques that lessen the suffering of the animals who involuntarily sacrifice their lives for a questionable research enterprise. When I do nothing I betray not only the animals but I also betray my own humane nature.

When I saw a primate research facility from inside for the first time I quickly realized that the cruelty against monkeys is much more pervasive than I had concluded from the horrible pictures: The suffering is not restricted to the inhumane experimental procedure itself but extends to every single hour of the animal's life in the laboratory. More than 700 macaques - the prevailing primates in the research laboratory - were locked behind bars, fearfully waiting to be forcefully removed and immobilized during life-threatening procedures. The situation was reminiscent of a high security prison for convicted criminals, though none of the animals was guilty of any crime other than being a helpless victim. Each monkey was kept alone, in a cage that was so small that he/she could not take a few steps in one direction, let alone jump or run in monkey fashion. There was no companion to huddle, groom or play with. 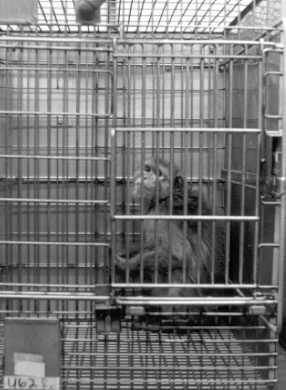 Figure 1. The prevailing single-caging of macaques does not address the social needs of the animals. 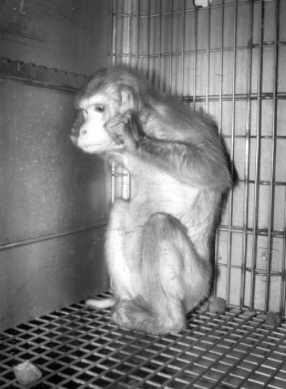 Figure 2. The prevailing cage environment for macaques does not provide sufficient environmental enrichment so as to prevent the development of stereotypies. This rhesus macaque female is pulling her ears over and over again because she lacks environmental stimulation.

In order to accommodate as many monkeys in one room as possible, cages were arranged in double-tiers with one row stacked on top of the other. This condemned half of the animals to confinement in a permanently shady, cave-like environment. Needless to say, that this was not a living quarter that was suitable for diurnal animals.

The conditions I witnessed were so depressing that most monkeys had developed stereotypies such as pacing, rocking, bouncing, somersaulting, swaying from side to side, biting parts of their own bodies, pulling their ears, tossing their heads back and forth, or smearing feces on the cage walls. When I expressed my concern about these alarming signs of distress, I was told that they are "abnormal" behaviors that the animals develop when kept in cages for a long time. My conclusion was different: The appalling caging environment was abnormal not the behavior of the monkeys.

It was hard for me to believe that the situation I had seen was typical. I therefore decided to contact animal care personnel of other laboratories and survey the scientific literature to find out how macaques are housed and handled in other research facilities. What I heard and what I read confirmed what I had seen myself, leading me now to the following conclusion: In the U.S. there are currently approximately 15,000 macaques imprisoned in double-tier stacked solitary cages waiting to be subjected to distressing procedures. The conditions under which these animals are forced to live are so inadequate that researchers themselves have repeatedly admitted in scientific publications that about 10 out of 100 caged monkeys are so frustrated that they mutilate themselves. The recent scandal at the Oregon Regional Primate Research Center - one of the leading primate research facility in this country - gives the public a rare opportunity to get a sobering look behind the doors and see for themselves that the manner in which most primates are currently being housed and handled is not only inhumane but at the same time counterproductive to good research. Wouldn't it be naïve to expect scientifically valid research data from an intelligent, social animal who is forced to live alone in a barren cage with nothing to do but engage in self-injurious behavior out of utter frustration?

Providing monkeys in research institutions with primate-adequate housing and humane handling conditions would be a guarantee that scientific data are not unnecessarily skewed by uncontrolled extraneous variables. There is no doubt that primatological investigators could do their research with fewer animals - and hence avoid a lot of unnecessary suffering and squandering of tax dollars - if they would make sure that the animals are not behavioral cripples as a result of understimulation, and that they do not suffer distress during handling procedures.

The ethical and scientific concerns arising from the prevailing housing and handling practices of monkeys have been acknowledged by the United States Department of Agriculture in 1991 stipulating in the Regulations and Standards of the Animal Welfare Act that:

These legal requirements are consistent with guidelines promulgated by the International Primatological Society in 1989/1993 and recommendations set forth by the National Research Council in 1998. Many reports have been published in scientific journals outlining well-tested options for addressing the social needs of monkeys in the research laboratory, for enriching their environment in a species-adequate manner, for assuring uniform lighting conditions, and for training the animals to cooperate - rather than resist - during common handling procedures such as capture, injection, topical drug application, and blood collection. This information has also been compiled in bibliographies and a comprehensive database which can be accessed on the Internet at no cost.

How is it possible that investigators keep research monkeys under living conditions and handle them in ways that are in gross violation with federal rules and professional standards?

Conflict of interest: In theory, the attending veterinarian has the obligation to assure adequate housing and humane handling conditions for nonhuman primates. Research institutions, however, do not offer tenure positions for attending veterinarians. This circumstance makes any veterinarian who is primarily committed to animal welfare rather than animal experimentation extremely vulnerable to retribution during job related reviews. It is in the primate veterinarian's own interest not to create obstacles in the research enterprise and accept the traditionally inadequate housing and handling practices of the animals. The current system makes it easy for primate facilities to weed out those veterinarian who try to improve these practices and select those who condone them.

Lack of interest: A biomedical researcher conceded in a prestigious scientific journal: "Most investigators think only briefly about the care and handling of their animals and clearly have not made it an important consideration in their work." It is true, for many researchers the monkey is merely an identification number attached to a computer-processed data entry, and they consider it a waste of their time to visit the animals and check for themselves if they are properly housed and handled.

Arrogance: To quote from the same article: "Finally, I think that all investigators consider themselves upstanding citizens of excellent ethical and moral character. Their feeling may be that since they are moral and ethical in every sense of the word, they are quite capable of monitoring their own animals without outside interference." Without question, most investigators regard compliance with the minimum housing standards set forth by the federal Animal Welfare Act as a nuisance.

Lack of ethical concern: It is not uncommon for investigators to treat monkeys with little or even without ethical reservations. A world-famous scientist made this quite clear when he explained that experimentation with human patients is hampered by "sound ethical constraints", but that "no such problems exist for the monkey researcher."

The present situation in primate research laboratories strongly suggests that professional judgment is no guarantee that the inhumane housing and handling conditions of laboratory monkeys will ever improve. Progress will be possible only if USDA makes more serious efforts to enforce the federal law as Congress intended. Until then, the well-being of research monkeys will continue to depend on the mercy of scientists who traditionally view them as research objects and treat them accordingly.

Viktor Reinhardt has worked for ten years as ethologist and clinical veterinarian at a primate research facility where he took care of the animals' health and introduced more humane housing and handling conditions for them. After the laboratory hired a new director Dr. Reinhardt's work was no longer appreciated and his contract terminated in 1994. He joined the Animal Welfare Institute, Washington DC in the same year where he continues `from outside' to promote better living conditions for nonhuman primates in research institutions. The Animal Welfare Institute has has also published Environmental Enrichment for Caged Rhesus Macaques - A Photographic Documentation and Literature Review.

Reproduced with permission of the Editor of IPPL [International Primate Protection League] News 28(2), 5-7, 2001