Six adult female stumptailed macaques (Macaca aretoides) were trained within a two week period to actively co-operate during in-homecage venipuncture rather than in a restraint apparatus away from the homecage. The training was based on consistent firmness, gentleness and patience. Total training time per subject ranged from 15 to 45 minutes with a mean of 33.5 minutes. Endocrinological analysis one week after the last training session revealed an insignificant increase (0.4%) in serum cortisol between venipuncture samples taken 15 minutes apart. It was concluded that training stumptailed macaques to actively co-operate during blood collection in their familiar homecage promotes the animals' well-being by avoiding undue disturbance; increases the validity of research data collected by minimizing distress, and reduces health risks of the handling personnel by eliminating the need to carry the animals to a special area.

© 1992 Universities Federation for Animal Welfare
Animal Welfare 1992 1: 249-255
This article has been reproduced with the permission of the publisher.

A simple training technique was developed to ensure active co-operation of adult stumptailed macaques during blood collection in their homecage rather than in a restraint apparatus. This new procedure promotes the well-being of the animal subject because it no longer has to endure mechanical immobilization away from its familiar homecage during venipuncture.

Blood collection from stumptailed macaques (Macaca arctoides) being used in research usually involves temporary removal of the subject from its homecage. This is unsatisfactory for two reasons:

Stumptailed macaques can be conditioned to enter a trap (Smith 1981) and tolerate having a leg pulled out for blood collection (Bunyak et al 1982). Rhesus macaques (Macaca mulatta) readily learn to voluntarily extend a leg for venipuncture in the familiar home environment (Reinhardt 1991b), or away from it in a restraint apparatus (Clarke et al 1990, Walker et al 1982). A training technique for voluntary in-homecage venipuncture has also been described in a male drill (Mandrillus leucophaeus; Priest 1991). Active co-operation during venipuncture probably causes less distress than does passive tolerance, particularly when the monkey is permitted to stay in its familiar home environment (Reinhardt 1991a).

The present study is an attempt to adapt the rhesus training technique of voluntary in-homecage venipuncture to stumptailed macaques.

Subjects were six adult (older than 10 years) female stumptailed macaques. Their body-weights ranged from 7 to 17kg with a mean of 11kg. The animals were pair-housed for more than one year in double cages, 85cm x 170cm x 92cm high1 each provided with a privacy panel, two perches, and one restraint mechanism (Figure 1; Reinhardt et al 1991a). 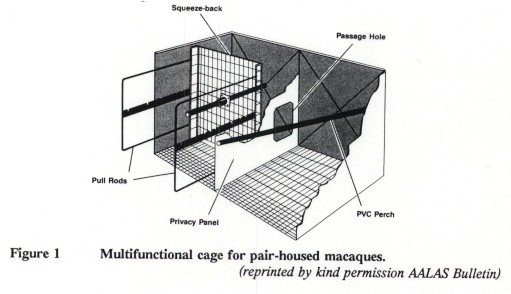 1Editor's footnote: These cage sizes are slightly larger than the minimum dimensions in the guidelines of the Institute of Laboratory Animal Resources (USA) but are below the European and UK requirements.

The door of the restraint compartment was equipped with a sliding transparent Plexiglas panel. Its opening allowed an animal to comfortably extend a leg out, yet was small enough to prevent the animal from protruding its head out of the cage (Figure 2). The panel was also used as a safeguard for the person performing the venipuncture. An animal could be trapped by pulling the squeeze-back past the passage hole of the privacy panel (Reinhardt et al 1991a). The companion had free access to the rear portion of the squeeze-back, allowing visual contact.

The animals were accustomed to having blood collected in a restraint apparatus away from their home cages. This procedure involved mechanical immobilization to guarantee the safety of the personnel.

All six subjects were familiar with the authors who trained four and two of them, respectively.

Once the animals were trained serum cortisol concentrations were measured to evaluate possible distress reactions. For this purpose, two 0.5m1 blood samples were collected from each animal one week after the last training session, at 1300h and at 1315h. The subjects were undisturbed by human activity for 90 minutes prior to the venipuncture at 1300h. The first sample was used to assess basal cortisol concentrations and the second to assess the magnitude of cortisol response 15 minutes after venipuncture (cf Line et al 1989a, Reinhardt et al 1990). Blood samples were centrifuged at 2,000 rpm for 10 minutes and the serum stored at -200C. Subsequent hormone analysis was carried out with a Clinical Assays Gamma Coat Cortisol Kit (Dade, Baxter Travenol Diagnostics, Cambridge, MA, USA).

Statistical analysis was done using the Mann-Whitney U test (Siegel 1956).

All six stumptailed macaques were successfully trained within a two-week period to actively co-operate during blood collection in their homecages. Nine to 23 training sessions per subject were necessary to achieve this. Sessions were scheduled according to a subject's progress, although individuals were trained on no more than three occasions per day. The monkeys were trained with firm gentleness, but no sessions were terminated before the goal of the training step was achieved. The duration of individual sessions was therefore not constant but varied between 49 and 351 seconds. Animals that resisted the conditioning process (e.g. were unwilling to turn to one side, climbed up the cage wall to avoid having the leg grasped, struggled while having the leg pulled out of the cage) were never punished but treated with special patience.

On average, 16 minutes of training time was invested until subjects passively tolerated in-homecage venipuncture (steps 1 - 5) an additional 18 minutes were then required to ensure active co-operation during the procedure (steps 6 & 7). Total average training time was thus 33.5 minutes, ranging from 15 to 45 minutes (Table 1).

After entering an animal room it took between 1.5 and 2 minutes to draw a blood sample from a successfully trained subject. Basal serum cortisol concentrations of such individuals from the samples taken at 1300h were not significantly different from those taken 15 minutes later (U=19, P>0.1; Table 1).

Table 1: In-homecage venipuncture: training time investment of the trainer, and serum cortisol measurements of the subject one week after completion of training.

The present findings are encouraging. They clearly show that the potential distress for the subject (Reinhardt 1991a, Reinhardt et al 1990) and the potential health risk for the animal handler associated with conventional blood sampling techniques away from the animal's homecage can be avoided. The initial time investment of 15 to 45 minutes for the training quickly pays off in shorter handling times, since the animal no longer has to be transported to a special restraint apparatus and returned to its cage.

Mean total training time required to ensure active co-operation during in-homecage venipuncture was 33.5 minutes. This is comparable to the situation of adult rhesus macaques living under the same housing conditions and being subjected to the same training technique (average training time 39 minutes; Reinhardt 1991b). The readiness to learn the expected responses and to co-operate voluntarily, rather than resist a common handling procedure, is conspicuous in both species and reflects their high levels of intelligence. It is very likely that other non-human primates commonly used in research are equally well suited to being trained to co-operate during in-homecage venipuncture. Different training techniques may have to be developed for each species (e.g. Priest 1991) but the basic strategy will probably need to be the same. With consistent patience, gentleness and firmness, the trainer works with, rather than against, the animal to be trained.

The intelligence of non-human primates used in research is under-utilized in scientific methodology. More systematic attempts should be made to replace conventional handling procedures which rely on mechanical, forceful or chemical immobilization, by training techniques that draw on the animals' inherent learning capabilities and willingness to cooperate.

We are very grateful to Mrs. Annie Reinhardt for providing constructive comments on this manuscript and to Mrs. Jackie Kinney for proof reading. This project was supported by NIH grant RR-00167 to the Wisconsin Regional Primate Research Center. Publication number 32-025 WRPRC.