With Only 45 Remaining, Species Is One of World’s Most Endangered Mammals 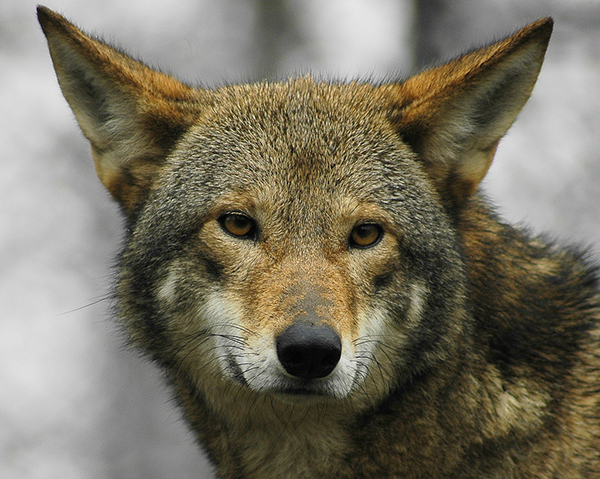 Washington, DC— A petition including nearly half a million signatures was delivered to the US Fish and Wildlife Service today, urging the agency to fulfill its legal duty under the Endangered Species Act to recover the critically endangered red wolf. The petition—organized by the Animal Welfare Institute, Care2, the Center for Biological Diversity, Endangered Species Coalition, Wildlands Network, and several local North Carolina high school students—urges the agency to resume efforts to save a species now reduced to an estimated wild population of only 45. Delivery of the petition comes a little over a year after the Service officially announced it was suspending red wolf releases into the wild.

“It’s shameful how the Service has bowed to political pressure and deliberately undermined the success of its program to recover red wolves,” said Jamie Pang, endangered species campaigner at the Center for Biological Diversity. “The agency’s inaction is condemning this species to extinction.”

Red wolves were declared extinct in the wild until a successful reintroduction program was established in North Carolina’s Alligator River National Wildlife Refuge in 1987. By 2006, this program had enabled the population to expand to more than 130; the program enjoyed ample support from conservationists, the public, and even private landowners who live within the red wolf recovery area.

"Until recently, the Service operated a successful red wolf recovery program with widespread public support for saving the wolves,” said Tara Zuardo, wildlife attorney with the Animal Welfare Institute. "However, without a valid reason, the agency has now turned its back on the species and, instead, is sitting idly by as red wolf numbers plummet.”

“It’s simply jaw-dropping that the U.S. Fish and Wildlife Service is consciously deciding to issue a death sentence — knowingly allowing a wolf found only in the United States to go extinct. The red wolf has been one of our greatest wildlife success stories and could be again,” said Leda Huta, executive director of the Endangered Species Coalition. “It is a day I never thought I’d see.”

Following a lawsuit by nonprofit groups to limit coyote hunting—once a threat to the red wolf’s survival—the Service faced increased political pressure from a small, but very vocal group of individuals opposed to red wolves to curtail the recovery program. In 2014, the Service eliminated the program’s recovery coordinator position; in 2015, it stopped the introduction of new red wolves into the wild. The agency also ended its coyote-sterilization program, which was helping to prevent hybrid animals from compromising the red wolf’s gene pool, curtailed law enforcement investigations of wolf deaths to help bring poachers to justice, and allowed for both the lethal and nonlethal removal of wolves from private lands, arguably causing the population to sink.

“The red wolf is now one of the world's most endangered mammal species. There are 37 times as many giant pandas, 100 times as many snow leopards, and 400 times as many African lions in the wild as there are red wolves left in eastern North Carolina," said Ron Sutherland, a conservation scientist at Wildlands Network. "We hope Fish and Wildlife Service Director Dan Ashe and Interior Secretary Sally Jewell will listen to the public and prevent the red wolf from going extinct in the wild again."

"Hundreds of thousands of members of the Care2 community are speaking up for red wolves, demanding the howls of these amazing animals continue to sound through North Carolina. We hope our federal wildlife leaders hear this call and reverse course immediately,” said Aaron Viles, senior grassroots organizer with Care2.

The Animal Welfare Institute is a nonprofit charitable organization founded in 1951 to reduce animal suffering caused by people. AWI engages policymakers, scientists, industry, and the public to achieve better treatment of animals everywhere—in the laboratory, on the farm, in commerce, at home, and in the wild.

Care2is a community of 36 million standing together for good. People are making world-changing impact with Care2, starting petitions and supporting each other’s campaigns to help individuals, animals and the environment. A pioneer of online advocacy since 1998, Care2 is a B Corporation, or social enterprise, using the power of business as a force for good.

The Center for Biological Diversity is a national, nonprofit conservation organization with more than 1 million members and online activists dedicated to the protection of endangered species and wild places.

Wildlands Network is a nonprofit organization that works to reconnect and rewild nature in North America. With offices in the United States and Mexico, Wildlands Network advocates for continental-scale wildlife corridors and for the recovery of top carnivores such as wolves and cougar.