The Freimann Life Science Center, University of Notre Dame (Notre Dame, IN), approved a new protocol for the long-term use of guinea pigs (Cavia porcellus) as blood donors for mosquito colony maintenance. With the acknowledgment of the social nature of these animals, and with the many references to the social and environmental enrichment needs of laboratory animals in the Guide for the Care and Use of Laboratory Animals2, the technicians in the animal facility proposed to group house the guinea pigs from the inception of the project.

The technicians purchased 49 female Dunkin-Hartly guinea pigs from Harlan Sprague Dawley, Inc. (Indianapolis, IN) and Charles River Laboratories (Wilmington, MA). Their weights ranged between 600-1,200 g. Over the past two years, the original group of 12 guinea pigs has expanded by 4-5 guinea pigs at a time. 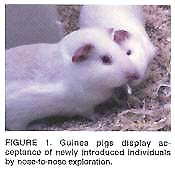 The established guinea pig colony easily accepts new guinea pigs, as evidenced by nose-to-nose contactl (Fig. 1) and vocalization. Although some established order of dominance has appeared, there have been very few aggression problems (such as ear nibbling).

The guinea pigs are group housed on the floor of a small animal room (9' 7" x 9' 7") in an enclosure constructed of four wire shelves (5' x 21" each; Metro, Wilkes Barre, PA). Wire shelves permit visualization and provide a place from which to suspend water bottles. Technicians placed the shelves on one side and tied them together with cable ties to create a 9'2" x 5' enclosure (Fig. 2), with a height of 21". Plastic mesh around the outside helps contain the bedding in the enclosure. The bedding consists of 1/8" corncob and cornhusks. The enclosure meets the Animal Welfare Act's recommended size requirements (minimum space per guinea pig3: <350 g, 60" sq.; >350 g, 90" sq.; breeders, 180" sq.).

As new guinea pigs are received, we modify the enclosure. Specifically, we add a divider (wire rack) at one end (Fig. 2) to provide vocal and visual contact without adding animals to the established colony until a two-week acclimation period is complete. This permits the caretakers to monitor feed and water intake during the acclimation period. Purina Guinea Pig Chow 5025 (PMI Nutrition International, St. Louis, MO) is provided in sealed ceramic crocks; water bottles are suspended on the front of the enclosure.

The technicians have introduced a variety of enrichment devices such as bedding bags, PVC pipes (6" diameter), and a Ferretrail Roll-About ball (Fig. 3; Pets International, Ltd., Arlington Heights, IL) to allow the pigs to display natural behaviors such as burrowing and gnawingl,4 (Fig. 4). Also, unscheduled treats such as apples, carrots, and alfalfa are scattered in with cornhusks to promote foraging (Fig. 5).

We observed the animals pushing around paper rolls and plastic balls. When given cardboard boxes, the animals use them as sleeping areas and as chew toys. We provide adequate numbers of enrichment devices at all times to prevent fighting among the animals.

We scoop out the bedding twice weekly, and disassemble and clean the entire room thoroughly with a suitable disinfectant once a week. The staff discards cardboard items and disinfects all balls and other toys by processing them through a cage washer. We rotate enrichments to provide a novel environment.

Guinea pigs are examined monthly for dental malocclusion and to monitor body weights. The room has a non-skid floor with an abrasive surface that facilitates normal wear of the nails. We insert a microchip subcutaneously between the scapulae of all guinea pigs for individual identification, and maintain individual health records.

Although the cleaning process, which involves disassembly of the pen, is time-consuming (almost two hours), we feel that the time is well-invested as evidenced by the guinea pigs' playing, running, and vocalization. The guinea pig pen has become one of the facility's highlights for staff and visitors.

Reproduced with permission of the publisher. Published in Lab Animal, April 1997.