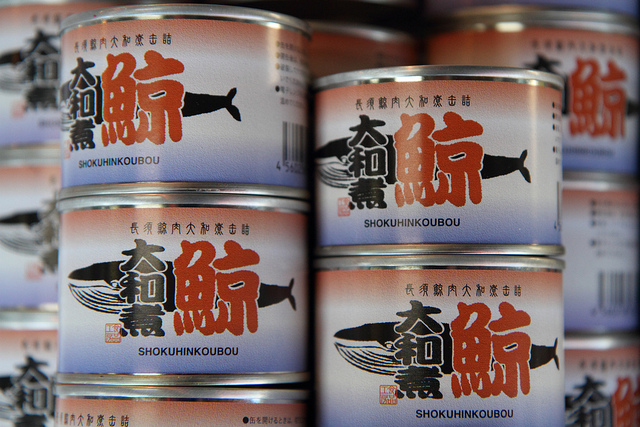 HONOLULU—The World Conservation Congress yesterday formally adopted a motion against Japan’s research whaling program, which is used as a front to kill whales for commercial sale. The motion calls on Japan to stop issuing “special permits” for whaling in the Antarctic and western North Pacific oceans and for all International Whaling Commission (IWC) members to refrain from issuing any further permits.

The motionwas overwhelmingly approved earlier via an electronic vote — of those voting, 93 percent of government members and 96 percent of NGO members supported the motion — and adopted by the Congress today.

Japan’s “scientific” whaling program is permitted through a loophole in the International Convention for the Regulation of Whaling (ICRW) and has led to the commercial slaughter of over 15,000 whales since 1988, including over 10,000 within the South Ocean Whale Sanctuary established in 1994. Meat and other products of the hunt are sold for commercial gain, thereby circumventing the global ban on commercial whaling approved by the IWC in 1982. In the 2015-2016 whaling season, Japan took all the whales in its self-allocated quota (333 minke whales), including 157 pregnant females.

“The world has spoken and the message is clear: stop killing whales. The decisive action today by the World Conservation Congress is a win for the whales,” stated Taryn Kiekow-Heimer, a senior policy analyst with the Natural Resources Defense Council’s Marine Mammal Protection Project. “It harpoons Japan’s ‘scientific research’ whaling program and recognizes that there is no legitimate reason to kill thousands of whales in order to study them.”

“Japan’s farcical claims that it must kill whales for science have been rejected repeatedly by many cetacean scientists, the majority of IWC member governments, and now by the World Conservation Congress,” explained DJ Schubert, wildlife biologist at the Animal Welfare Institute. “Instead of continuing to ignore government opinion and scientific reasoning, it’s time for Japan to discard its harpoons and embrace nonlethal tools to study whales.”

“With scientific and legal opinion against it, with nearly two dozen IWC resolutions opposing its whaling, and given overwhelming public sentiment in favor of whales, Japan’s intransigence is incomprehensible,” noted Pam Eiser, president of Project Jonah Australia. “Until the whaling ships no longer sail, Japan’s reputation will continue to be damaged by its dying whaling industry.”

In 2014, the International Court of Justice held that Japan’s purportedly scientific whaling program in the Antarctic was not conducted for the purposes of scientific research and therefore was in violation of Article VIII of the ICRW. In 2015, a number of scientists affiliated with the Scientific Committee of the International Whaling Commission – comprised of the world’s foremost experts on whales – concluded that Japan’s whaling program was not scientifically justified.

“We welcome this latest condemnation of Japan's so called scientific whaling from this important expert body. Japan's whale killing meets no real scientific needs,” stated Kitty Block, vice president of Humane Society International. “It is solely a mechanism to allow commercial hunts to continue. The world's leading experts are not convinced by either of Japan’s scientific or legal arguments to continue whaling.  Japan at long last, must end this charade.”

“Tokyo, take note!” said Patrick Ramage, whale program director at the International Fund for Animal Welfare. “The international community is charting a course for collaborative whale science in the 21st century. The Government of Japan should be leading that effort, not trying to turn back the tide.”

The World Conservation Congress is hosted every four years by the International Union for Conservation of Nature and is currently meeting in Hawaii. The Congress has brought togethermore than 8,000 delegates – including government officials, scientists, and policy experts from more than 180 countries, including Japan – to discuss solutions to the world’s most pressing environment and development challenges.

About the Animal Welfare Institute
The Animal Welfare Institute (AWI) is a nonprofit charitable organization founded in 1951 and dedicated to reducing animal suffering caused by people. AWI engages policymakers, scientists, industry, and the public to achieve better treatment of animals everywhere — in the laboratory, on the farm, in commerce, at home, and in the wild. For more information, visit www.awionline.org.

About Humane Society International
Humane Society International and its partner organizations together constitute one of the world’s largest animal protection organizations. For more than 25 years, HSI has been working for the protection of all animals through the use of science, advocacy, education and hands on programs. Celebrating animals and confronting cruelty worldwide – on the Web at hsi.org.

About the International Fund for Animal Welfare
Founded in 1969, IFAW saves animals in crisis around the world. With projects in more than 40 countries, IFAW rescues individual animals, works to prevent cruelty to animals and advocates for the protection of wildlife and habitats. For more information, visit www.ifaw.org. Follow us on Facebook and Twitter.

About Project Jonah Australia
Founded in Australia in 1975 Project Jonah is dedicated to achieving a world-wide ban on commercial whaling. Our first success was in leading the campaign to turn Australia from a whaling country to a prominent advocate for whale conservation. We are committed to the conservation and welfare of all cetaceans.