The effect of a compatible companion on the behaviour and bodyweight of eight previously single-caged, 31-36 years old rhesus macaques was assessed 16 months after pair formation.

The aged subjects preferred to stay in close proximity with their companion even though this reduced their available cage space. They spent on average 21% of the time (3 one-hour observations in the morning, at noon and in the afternoon) interacting with the companion in noninjurious species-typical ways. Affiliative interactions, i.e., grooming and huddling, accounted for more than 99% of total interaction time. Sharing a cage with a compatible con-specific did not jeopardize the subjects' general health, as reflected in their body weight development.

It was concluded that single-caged rhesus macaques readily adapt to living with a companion who provides them with a species -adequate environment for the expression of their inherent social disposition.

Aged laboratory rhesus macaques have conventionally been housed singly. Recent attempts to resocialize such individuals after more than 10 years of social deprivation were successful [1]. The aged subjects were paired with each other or with younger partners. Pair formation was associated with no or with negligible aggression and companions were compatible in every case (n=13) throughout a one year follow-up period [1].

Pair formation of aged nonhuman primates is an attempt to provide the animals a species-appropriate environment conducive for the expression of their social disposition.

How successful are these attempts? Do the aged subjects seek companionship or would they prefer staying alone? Are they able to adapt to a social environment and engage in positive social activities after so many years of living alone?

The present investigation addresses these questions in aged individuals who, after many years of social deprivation, have been pair-housed with compatible conspecifics for 16 months.

The subjects of this study were 8 aged rhesus macaques (Macaca mulatta). The animals were 31 to 36 years, on average 32.8 years old. There were 6 females and 2 males. Each subject was paired with a compatible companion for 16 months as a means of environmental enhancement. Subjects had been housed singly for several years prior to pair formation. They were weighed one year prior to pairing, at the day of pairing, and again one year after pairing.

Each pair shared a 85 x 170 x 85 cm upper-row double cage with a privacy panel (blind cage divider with passage hole close to the back wall of the cage) and two diagonally suspended PVC perches.

The animals were fed commercial dry food at 07.30, supplemented with fruit at 14.30. Water was available ad libitum.

All pairs were familiar with the observer who sat at 1.5m distance from the cages, at eye-level with the animals while carrying out hand-written behavioural recordings. Each pair was observed on one day 3 times:
in the morning from 9.00 to 10.00
at noon from 12.00 to 13.00,
in the afternoon from 15.00 to 16.00

Statistical analysis was accomplished with the use of the Mann Whitney test and the level of significance set at p<0.05 [2]. 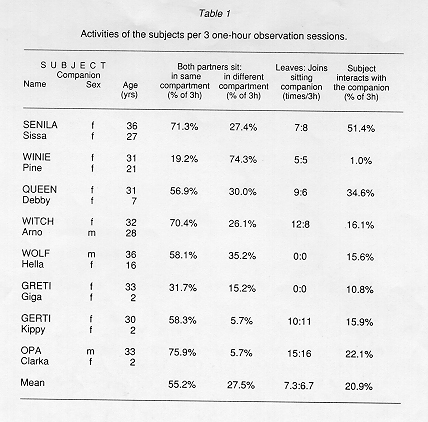 Partners were observed sitting simultaneously, on average 82.7% of the time. They sat together in the same compartment of the cage twice as much as in different compartments; the difference was significant (c.f. Table 1).

Subjects joined their sitting companions equally as often as they left them (no significant difference; c.f. Table 1).

On average 0.9 agonistic interactions occurred per pair and per hour.

SENILA threatened (intended slapping) Sissa who took a piece of apple in front of her once;

being looked at by SENILA, Sissa crouched once.

GRETI threatened (staring) juvenile Giga who bounced on a perch and pulled at her tail on four occasions;

GERTI threatened (intended slapping) juvenile Kippy, who ran around her in circles and bounced up and down in front of her six times, and slapped her once;

OPA threatened (intended slapping) juvenile Clarka who followed him on his heels and jumped on the perch right above his head three times, and slapped her twice.

Mounting was observed in 4 pairs:

QUEEN mounted Debby once after having slapped her; this was followed by Debby grooming QUEEN uninterruptedly for 615 sec;

OPA mounted Clarka once after having slapped her. 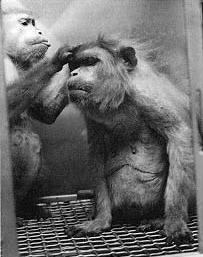 FIGURE 1. SENILA (right animal) 36 years of age, was the oldest animal at the Wisconsin Regional Primate Research Center. During the 180-min observations, SENILA was groomed by her 27 year-old companion Sissa (left animal) for 27 minutes; in her turn, SENILA groomed Sissa for 58 minutes.

With only one exception, subjects spent substantially more time sitting together with the companion in the same half of the cage than sitting alone in a different half of the cage. They did not leave their companions and went behind the privacy panel more often than they joined them. Apparently, they were free to decide to be alone, but preferred staying in close proximity with their partner even though this reduced the available cage space. This attraction to a compatible conspecific may reflect the old subjects' need for social reassurance in the relatively uncontrollable environment of cage confinement.

The aged animals interacted in species-typical ways with their companions on average 21 % of the time. This is compatible with the situation in the wild where troop members are engaged in social activities approximately 20% of the time [3]. The presence of a compatible conspecific presumably created a favourable environment for the aged individuals to express their species-characteristic need for social interaction after many years of social deprivation.

The relationships between subjects and companions were affiliative rather than hostile, with huddling and grooming accounting for 99% of total interaction time. Agonistic activities were non-injurious and rare. They occurred primarily (16/5) in the three pairs with infants, with the old subjects disciplining their sometimes all-too frisky young companions. In the event of excessive disturbance of the aged subjects by their young companions, it may become advisable to split the pairs and re-pair the subjects with each other.

The present findings are encouraging because they clearly show that previously single-caged aged rhesus macaques readily adapt to living with a compatible companion. There is no reason for singly caged rhesus macaques to be deprived of companionship because of old age. Sharing a cage with a compatible conspecific does not jeopardize their general health, as reflected in their body weight developments, but provides a species -adequate condition for the expression of their true nature, i.e. sociability.

We are thankful to Mrs. Jackie Kinney for proof reading the manuscript.
This project was supported by NIH grant RR-00167 to the WRPRC. Publication number 32-050 of the WRPRC.