INTRODUCTION
Recent interest in the welfare of captive animals has led to the use of techniques to stimulate normal patterns of behaviour and maintain healthy, reproductively viable individuals.18,19 Techniques include naturalistic methods such as foraging and clearly artificial ones, as with a variety of problem solving devices.10 Such techniques are relatively high profile in that they may create an 'immediate' change in the time budgets of behavioural activities in a more 'favourable' direction, i.e. individuals spend less time engaged in activities that are considered to be counter-productive to their welfare.15 Many laboratory animals however, do not live in environments that are specifically designed to enrich their behaviour. In fact, experimental protocols frequently require forms of standardised and uniform environments. In such cases the cages used are often determined by commercial constraints and folklore among institutions. Moreover, National and International guidelines of the dimensions of cage sizes and furnishings for different species are based, for example, upon body weight and postural propensities and not upon empirical comparisons of behavioural and/or physiological responsiveness among animals in commonly used conditions of laboratory housing. This is an omission both on welfare and scientific grounds. We advocate that one critical aspect of welfare studies should be to compare directly the behaviour of the same species of animal in different, commonly occurring laboratory conditions, including variations in temperature, humidity, light, cage size and furnishings. Cage size, for example, is an especially contentious issue and, in the absence of comparative research, people tend to assume that increases in space for the same social density and composition will be automatically beneficial in stimulating activities such as locomotion and exploration. In fact, studies with different species of callitrichid for instance, have shown that this is not necessarily so.3,13 Moreover, studies with various primate taxa show that the issues are complex, and deserve close scrutiny for different species.2
The present report concerns the cotton top tamarin (Saguinus oedipus oedipus). This species is of interest on welfare grounds due to its endangered and highly precarious position in nature, its frequent use in biomedical research, and the fact that it does not do well under a variety of 'standard' laboratory maintenance. Indeed, attention has been drawn to high incidences of infant mortality and abortion; in short, to poor breeding success.11 Among those few establishments that have maintained healthy viable breeding colonies of cotton tops, it has been observed that association with large complex and changing environments in which there is variety and frequent social and physical stimulation is of benefit.20

The aim of the present study was to compare the behaviour of pairs of tamarins in conditions that are more frequently found in laboratories, and in which for economic and other reasons, specific programmes of enrichment and variety are not provided. It was of particular interest to compare the behaviour of tamarins in a commercial custom built rack system with that which provided considerably more space and furniture with reference to equivalent social density. Further, single adult male female pairs of tamarins were selected because this is the breeding unit that is set up for callitrichid species in captivity.

METHODS AND MATERIALS
A total of seventeen adult male, female pairs of cotton tops were observed. Their ages ranged from 3 to 9 years. With the exception of one of the pairs, none had bred successfully.

Condition I
Eight pairs were selected at random from a total of sixteen pairs, housed together in one room that contained two horizontal rows of eight cages, with one row independently racked above the other. Each cage measured 1.0 m wide x 0.7 m high and 0.5 m deep. It was equally divided vertically with a wooden dowel as a perch along the length of the cage. [FIGURE I].

Two observers simultaneously scanned the behaviour of separate pairs of animals from within a hide which made them invisible to the monkeys. Observations were made between 11 a.m. and 3 p.m. on three days per week (Monday, Wednesday, Friday) over a period of seven consecutive weeks. Each pair was observed for 10 min per session with the prearranged order in which the pairs were watched, randomised over days. A maximum of four, 10 min observations was made on anyone group of tamarins on anyone day. A total of 2,400 ten-second time samples of behaviour was recorded for each animal in this condition.

Condition 2
Three pairs of cotton tops were included. Two of these pairs lived in one room with no other tamarins present. The third pair was one of two pairs living in a different, but identically arranged room. All these monkeys lived in wooden frame and wire mesh cages of dimensions 1.7 m high x 0.75 m deep and 0.9 m wide. The cage furniture consisted of a nest box (as in  Condition 1, but made of wood), two triangular platforms, and three branches - one horizontally across the cage, and two vertically across the cage at 45º [Figure 2]. 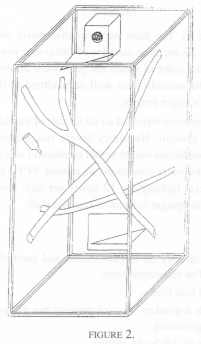 As before, observations were made on the behaviour of each pair simultaneously - from a hide, 2,400 ten-second time samples of behaviour were recorded per animal, this time over 5 days per week during a five consecutive week period, with the order of pairs again randomised.

Condition 3
Six pairs of cotton tops were distributed among three rooms with each of the two pairs per room living in a cage that measured 1.6 m x 2.4 m x 2.0 m. Branches were placed horizontally across the room at two levels, and a wooden nest box was also provided as in Condition 2 (Figure 3). 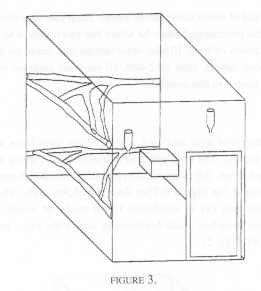 The pairs were simultaneously observed by one of us (BR) for a total of 3000 thirty-second time samples of behaviour over a period of twenty five weeks. Once again, the order in which the pairs were observed was randomised. There was no hide but the animals were well accustomed to the observer as these observations were part of a larger project.
In all conditions, the tamarins were fed an ad lib diet of monkey chow, fresh fruits, vegetables and animal protein. Humidity levels ranged around 55-60%. The temperature in the three conditions varied in that Condition 1 was maintained at around 76°F (±2) with that in the other conditions at around 74°F (±2). All the keeping rooms were lit by artificial lighting for 12 hours per day. Rooms in the first two conditions also had a single opaque window in one end wall.

Categories of behaviour
Behaviour was recorded directly on to data sheets, and cued electronically into ear pieces for the observers. The categories were:
- Movement - involving all four limbs.
- No movement - in which a monkey was not moving but did not engage in another recorded activity such as grooming.
- Huddling - stationary side to side body contact.
- Autogrooming - manipulation of an animal's own pelage.
- Social grooming - close visual inspection and manipulation of the pelage of another animal.
- Feeding - ingestion of food items.
- Drinking - taking water from water bottle.
- Stereotyped behaviour - repetitive atypical behaviour of the normal repertoire for the species.

In addition, recordings of proximity, i.e. when individuals were within 30 cm of one another (for whatever activity except moving) was observed in Conditions 1 and 2. A similar constraint applied to observations of the animals present in their next boxes. Finally, we decided to record the total instances (within a number of 10 sec. intervals) of both scent marking (with anogenital and suprapubic separately) and aggression, regardless of their occurrences at time sample intervals. Aggression was recorded when one individual threatened or attacked another.

RESULTS
The occurrence of the categories of behaviour was calculated as an average percentage of the total observation sample for each of the three conditions.

Statistical comparisons were made initially on these common categories. Because no difference in behaviour was found among males and females, that is no correlation (Spearmans, rho) was found within male/female pairs for any condition, comparisons of all categories of behaviour were made by Mann-Whitney U test (two tailed). The only significant difference was that females scent marked anogenitally more than males in Conditions 2 and 3 (U = 3.5, df=8, p<0.05). No such difference was found in Condition 1.

A central interest was to test for significant differences among common behavioural categories in the relatively small, 'medium' and large cages; comparisons were made by using a Kruskal-Wallace test. Two significant differences were found. The tamarins in Condition 3 (the largest) were significantly more active in terms of gross locomotor activity (movement category) than those in and between Conditions 1 and 2 (k=1694.6, k=166.3, p<.01). There was also significantly less close physical contact (huddling category) within pairs in condition 3 than those in and between Conditions 1 and 2. It was of particular interest however, to find that stereotyped behaviour (head bobbing) was only observed in Condition 1 and among females especially. We may note that not all the females exhibited the behaviour, but that it was a prevalent activity that we have never observed under any other laboratory condition. Subsequently, it was of interest to examine whether there were significant correlations between the behaviour of tamarins which lived in the same rooms. In fact, there were not. Moreover, the arrangement of condition 1 gave an opportunity to compare the behaviour of animals caged in different positions in the room (Mann-Whitney). The eight groups that we observed were labeled from left to right in each case, A,B, 1 and 2 on the top rack, and C, D, 3 and 4 on the lower rack. We found that those tamarins that were housed on the left hand (window) side of the room showed significantly more gross locomotor behaviour than those on the right hand side. Groups A+C vs 2+4 (df=4, U=0.00, p<0.05) - groups A+C+B+D vs 1+2+3+4 (df=8, U=5.0, p<0.01).
Again, those tamarin that were housed in the top bank of cages 1+2+A+B showed significantly more close physical contact (huddling) than those housed on the bottom bank 3+4+C+D (df= 8, U=8, p<0.01). They also showed significantly less behaviour recorded as 'non-movement' than those housed on the bottom bank (df=8, U=1, p<0.01). No other significant differences in any other category of behaviour was found in either of these regards.
Finally, we may comment briefly on differences in those categories of behaviour that were recorded in Conditions 1 and 2 only. For example, despite considerable differences in the space available between these conditions, the tamarins spent similar amounts of the observation time in their nest boxes. The males were very similar in this regard with the females in each case spending more time than their pair mates.
We also recorded more drinking in Condition 1. Given that this applied to both males and females, the differences are likely to be attributable to differences in the amount of water available in the diet, and for the higher temperature in Condition 1, than as suggesting reproductive condition (as early pregnancy) in the females, for instance.
Further, our measures of proximity within pairs of tamarins in Condition 1 were nearly twice those of Condition 2. This may be hardly surprising given the overall size differences of the cages. However, these differences do not necessarily indicate any measure of social integration. Differences between the two conditions in close contact scores, for example, were not significant. 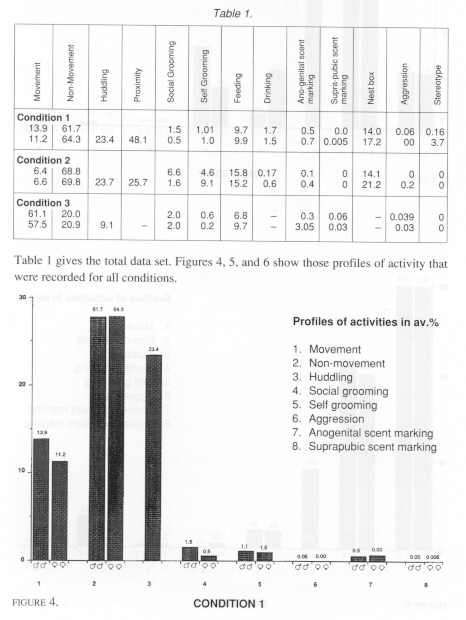 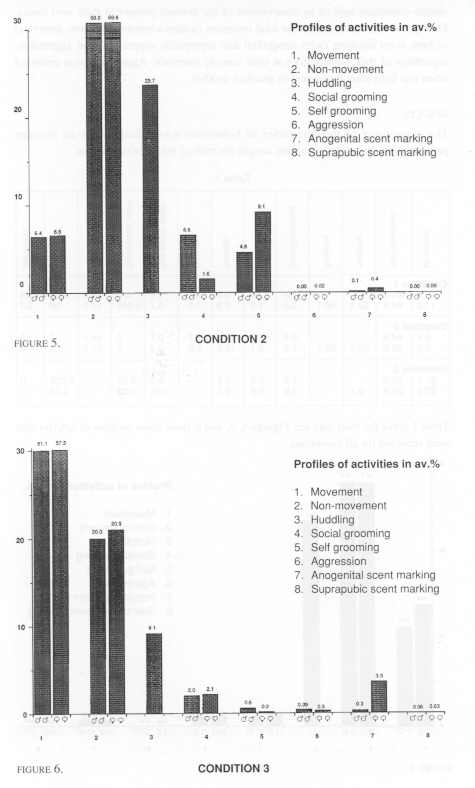 Acknowledgements
B.R. wishes to thank the British Council for their financial support of her work at Reading University. Special thanks are due to Adam Terlecki for all his help and friendliness during the observations in Condition 1.