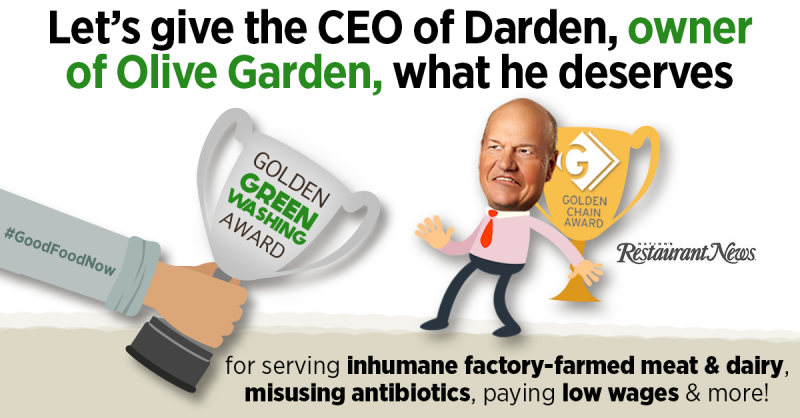 Washington, DC—In a letter sent today to Nation’s Restaurant News, a coalition of 15 environmental, animal welfare and worker justice organizations with over 10 million supporters expressed dismay over the publication’s decision to honor Gene Lee, CEO of Darden Restaurants, as one of the recipients of its Golden Chain Award. The award, which will be presented on October 24 during the Multi-Unit Foodservice Operators (MUFSO) conference, “celebrates industry veterans for their outstanding leadership, solid company performance and dedication to giving back.”

“Darden Restaurants CEO Gene Lee deserves the ‘Golden Greenwashing’ award, not the Golden Chain award,” said Kari Hamerschlag, deputy director of the Food and Technology program at Friends of the Earth. “Darden consistently misleads the public and the media with its empty rhetoric on responsible business practices. There is nothing responsible about serving meat and dairy produced in polluting factory farms with routine antibiotics or paying paltry wages to the majority of its restaurant staff.”

Within the letter, the groups stated that “Lee is undeserving of this award” and “has failed to show excellence in leadership in terms of improving conditions for employees, protecting the environment, fostering humane treatment of farm animals or promoting the health of Darden Restaurants’ customers.” The letter detailed reasons why Lee should not be given the award. Among these reasons:

“In an era when corporate social responsibility is on the rise, Nation’s Restaurant News’ award committee should consider more than just profits when evaluating corporate excellence, said Michelle Pawliger, farm animal policy associate with the Animal Welfare Institute. “Rewarding Mr. Lee’s false rhetoric gives a silent nod to Darden’s problematic practices—which include a continued reliance on suppliers that abuse animals. It also ignores the thousands of consumers who have spoken out against Darden for not implementing real improvements.”

About the Good Food Now! Coalition
The Good Food Now! coalition is a partnership of Friends of the Earth, Restaurant Opportunities Center-United, the Food Chain Workers Alliance, the Center for Biological Diversity, the Unitarian Universalist Service Committee, Green America and the Animal Welfare Institute. For more information, visit www.good-food-now.org.