Conservationists Rally Outside Mexican Embassy to Save Vaquita Porpoise 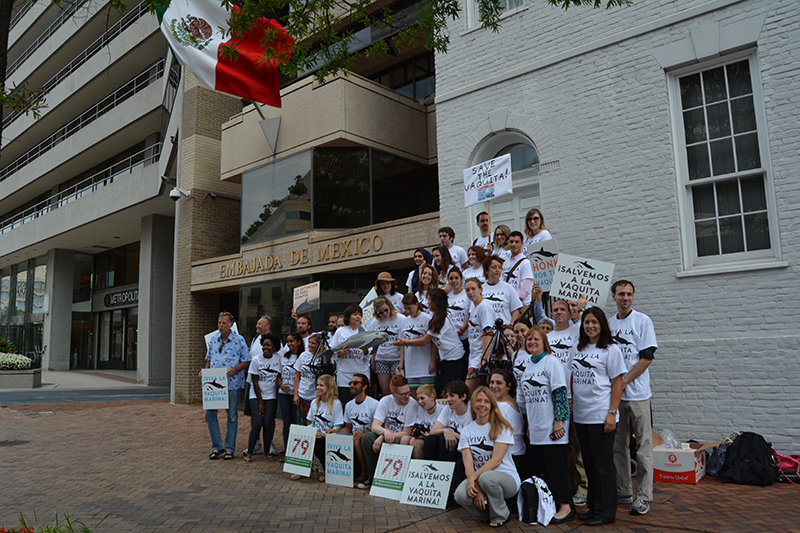 Demonstration Aligns with International Save the Vaquita Day

Washington, DC—Local conservationists rallied outside the Mexican Embassy today in support of the vaquita marina, the world’s smallest and most endangered porpoise, found only in Mexico’s Gulf of California. Participating organizations and individuals urged the Mexican government to enforce a permanent ban on gillnets in the Gulf to save the species, which number less than 100. The rally was held in recognition of International Save the Vaquita Day 2015, to be observed on Saturday, July 11.

“The vaquita is disappearing before our eyes,” said Susan Millward, executive director of Washington DC–based Animal Welfare Institute. “We welcome Mexico’s efforts to ban gillnets, but with less than 100 individuals remaining, the time for a complete ban and proper enforcement against the totoaba trade is now.”

After years of international pressure, Mexico announced a two-year ban on most gillnets in the northern Gulf of California in April 2015, and promised to increase enforcement action against the growing illegal trade of the totoaba, an endangered fish that is also only found in the Gulf of California. Fishing gear is the biggest threat to vaquitas, who often drown after becoming entangled in shrimp nets or in illegal gillnets set for totoaba. While Mexico’s actions are positive, experts advise that a permanent ban on nets in the Gulf and rigorous enforcement of that ban are vital to save the vaquita.

“Time is running out for the vaquita and urgent action is required to save its existence,” said Phil Kline, Greenpeace US senior oceans campaigner. “To reverse course, the illegal totoaba trade must cease immediately and the Mexican government must implement permanent protections for the vaquita habitat.”

After the event, rally supporters, including representatives from AWI, Greenpeace, the Center for Biological Diversity, and the Natural Resources Defense Council, met with Secretariat of Environment and Natural Resources representative Alejandra Espinosa Mijares and National Commission of Aquaculture and Fishing representative Luis Fleischer, to encourage Mexico to take more substantial actions to recover the species. During the meeting, the groups presented a letter articulating their concerns and requested that it be delivered to Alejandro Estivill, Mexico’s acting ambassador to the United States, upon his return to the Embassy from an engagement in Texas.

“Data presented to the International Whaling Commission's Scientific Committee in May 2015 showed an estimated 67 percent decline in vaquita acoustic activity from 2011 to 2014,” said marine biologist Desray Reeb, Ph.D. “Despite this apparent alarming annual rate of decline, it is not too late to save the vaquita from extinction, but now is the time. There won't be a later.”

“I want to be able to look my children in the eye and tell them that I did everything I could to save this animal,” said Marc Berkstresser, a concerned citizen who helped to organize the rally. “It will take a global effort to save the vaquita and I want to play my small part.”

About Greenpeace
Greenpeace is the leading independent campaigning organization that uses peaceful direct action and creative communication to expose global environmental problems and to promote solutions that are essential to a green and peaceful future. For more information, visit www.greenpeace.org.

About the Natural Resources Defense Council
The Natural Resources Defense Council (NRDC) is an international nonprofit environmental organization with more than 2 million members and online activists. Since 1970, our lawyers, scientists, and other environmental specialists have worked to protect the world's natural resources, public health, and the environment. NRDC has offices in New York City, Washington, D.C., Los Angeles, San Francisco, Chicago, Bozeman, MT, and Beijing. Visit usat www.nrdc.org and follow us on Twitter @NRDC.