Conservation Groups Launch Campaign to Save World's Only Red Wolves 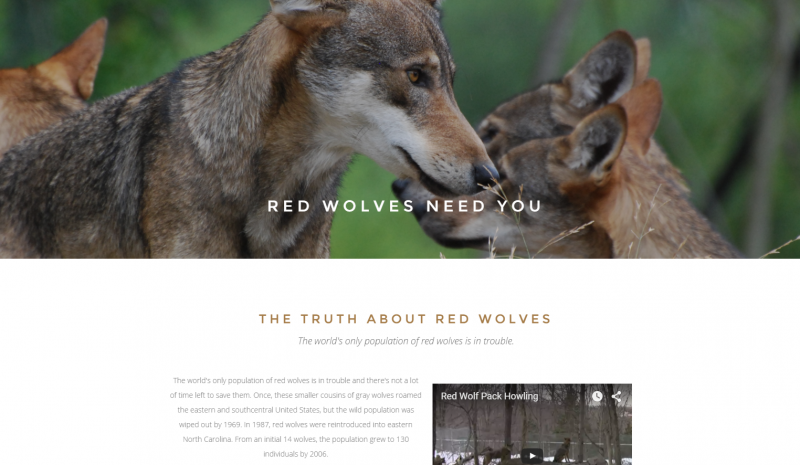 North Carolina—Conservation organizations launched an online campaign this week entitled “The Truth about Red Wolves,” aimed at building support for the dwindling population of the world’s only wild red wolves in North Carolina. The campaign is currently advertised on The Outer Banks Voice.

Supported by the Animal Welfare Institute (AWI), the Center for Biological Diversity, Defenders of Wildlife, the Endangered Species Coalition, and Wildlands Network, the campaign website educates visitors about the ecological and economic benefits that red wolves bring to North Carolina and the country and provides background information, key facts, and media updates on the species.

The campaign urges North Carolina residents and business owners who live or operate within the five-county red wolf recovery area (Beaufort, Dare, Hyde, Tyrrell, and Washington counties) to sign a petition indicating their support for having red wolves on federal and private lands. It also encourages all national supporters to write to the US Fish and Wildlife Service (USFWS) and ask that the agency continue to work toward the recovery of red wolves.

"There is a lot of misinformation out there about this majestic animal,”said Tara Zuardo, wildlife attorney with AWI, which organized the campaign. “We are hoping this campaign will help educate the public about red wolves and the value they bring to the local and national environment, and show the USFWS that red wolves have many local supporters.”

The red wolf (Canis rufus) is the most endangered canid in the world, and one of the world’s rarest mammals. Once, the wolves were common throughout the southeastern United States, but intensive predator control programs and loss of habitat decimated wild red wolf populations. By 1980, they were declared extinct in the wild. In order to save the species from dying out altogether, 14 red wolves bred in captivity were reintroduced within their native range in eastern North Carolina in the late 1980s. By 2006, this wild population had grown to 130 individuals. But now, due to the USFWS' failure to protect the species, their numbers have reportedly fallen to as few as 50 to 75 wolves.

About the Animal Welfare Institute
The Animal Welfare Institute (www.awionline.org) is a nonprofit charitable organization founded in 1951 and dedicated to reducing animal suffering caused by people. AWI engages policymakers, scientists, industry, and the public to achieve better treatment of animals everywhere—in the laboratory, on the farm, in commerce, at home, and in the wild.

About Wildlands Network
Wildlands Network is a conservation group committed to reconnecting nature in North America. We also advocate for the recovery of top carnivores to native ecosystems, due to the strong scientific evidence that exists for the crucial role of wolves, cougar, and other keystone species in regulating ecosystem function and maintaining biodiversity. Read more at www.wildlandsnetwork.org.