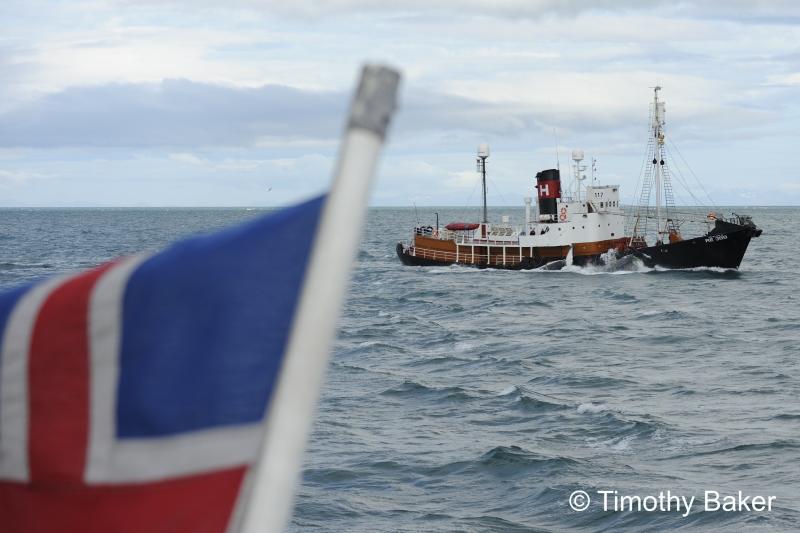 JOHANNESBURG—A coalition of conservation and animal protection organizations confirmed today that more than 1,500 metric tons of products from endangered Icelandic fin whales were shipped to Japan in July 2016. The discovery comes just prior to the 17th Meeting of the Conference of the Parties (CoP17) to the Convention on International Trade in Endangered Species of Wild Fauna and Flora (CITES), which starts in Johannesburg, South Africa, on September 24.

The organizations—which include the Animal Welfare Institute (AWI), the Environmental Investigation Agency (EIA), OceanCare, Pro Wildlife, and Whale and Dolphin Conservation (WDC)—tracked the transport vessel Winter Bay from Hafnarfjörður, Iceland, through Russia’s Northern Sea Route and on to Osaka, Japan, on the suspicion that it was carrying whale products from the Hvalur whaling company. Trade database Hagstofa(Iceland‘s statistics agency) and a media report in Iceland finally confirmed the shipment, which arrived in Osaka on September 9. The Winter Bay had previously transported over 1,800 metric tons of fin whale products from Iceland to Japan, on the same route, in 2015.

“Although fin whales were spared from cruel slaughter in 2016, Hvalur and its director, Kristján Loftsson, are emptying their warehouse of fin whale products, presumably to resume the killing in 2017,” said Clare Perry, head of EIA's Oceans Campaign. “There‘s no excuse for Iceland to continue to slaughter whales in violation of the 30-year old commercial whaling moratorium agreed to by the International Whaling Commission. The international community must now step in and tell Mr. Loftsson that enough is enough; fin whaling ends now.”

Iceland and Norway engage in commercial trade in whale products under each country’s respective reservations to the listing of great whale species on CITES Appendix I. Since 2008, more than 9,000 metric tons of whale products have been exported by the two countries to Japan and the Faroe Islands, a Danish territory. At CoP16 in Bangkok, Thailand, the United Nations Environment Programme’s World Conservation Monitoring Centre drew attention to this growing volume of international trade in whale products under reservation, noting that it could undermine the effectiveness of CITES Appendix I listings.

On September 14, the Myklebust Hvalprodukter company of Norway received a CITES export permit from the Norwegian government to ship up to 195 metric tons of minke whale meat to Japan. If the shipment goes ahead, it will be the largest single shipment of whale meat from Norway since the International Whaling Commission (IWC) moratorium took effect. Lofothval, a Norwegian whale meat company tied to Iceland’s Loftsson, also received an export permit on September 15 to ship up to 4 metric tons of whale meat to Japan. The combined shipments represent the meat of 137 minke whales.

“These export permits for the Norwegian whaling companies are deeply disturbing. It appears that the Myklebust company is now whaling almost exclusively for the Japanese market,” said Susan Millward, executive director of AWI. “We know that its vessel, the Kato, has carried Japanese inspectors on board. Norway and Japan are doing all they can to escalate commercial whaling and trade in whale products. CITES must support the IWC moratorium, and address the issue of whale trade under reservation.”

The organizations are concerned that a proposal from the CITES secretariat at CoP17 to rescind a key decision related to the conservation of whales (Decision 14.81 on Great Whales) could lead to a premature reassessment of the Appendix I designation for most whales, even while the commercial whaling moratorium remains in place. CITES parties must retain this decision or risk weakening both the ban on international trade in whale products and the IWC’s global moratorium on commercial whaling.

Chris Butler-Stroud, CEO of WDC, stated, “It is incomprehensible that CITES would even consider removing this decision at a time when trade in whale products by both Norway and Iceland has escalated to the point where thousands of tons of whale meat and blubber are being shipped to Japan annually.”

“Parties to CITES must ensure that Decision 14.81 is retained as is,” said Sigrid Lüber, president of OceanCare. “Should this decision be rescinded, we could eventually see a return to the days when international trade fueled an out-of-control whaling industry.”

About OceanCare
OceanCare has been working for the protection of marine mammals and oceans since 1989. With research and conservation projects, campaigns, environmental education as well as its contributions to a range of important international committees, OceanCare has undertaken concrete steps worldwide to improve the conditions of life in the world’s oceans. In 2011, OceanCare was granted Special Consultative Status with the Economic and Social Council of the United Nations. For more information, visit https://www.oceancare.org.

About Pro Wildlife
Pro Wildlife is an independent nonprofit organization, based in Germany and recognized as a charity. We are committed to protecting the world's wildlife from over-exploitation, habitat destruction and abuse. Many animal species are pushed to the brink of extinction because of the destruction of their habitat or because they fall victim to commercial hunters and animal captors. Existing conservation regulations are often insufficient. Pro Wildlife promotes effective conservation measures and exposes the reality of the animal trade and its fatal consequences for biodiversity. Pro Wildlife is an advocate for wildlife—in public, in the political field, and through conservation projects. https://www.prowildlife.de/.