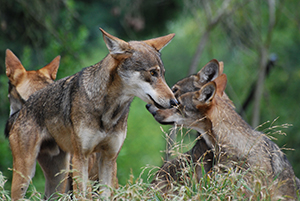 The USFWS authorized the killing of the female wolf last week, despite telemetry data showing the known breeder to be exhibiting denning behavior. USFWS staff report that they have not had access to the property with the suspected den site for at least two years, and therefore any puppies could not be retrieved or their health assessed. Red wolves typically give birth in late April or early May. It is unknown how many puppies may exist. The slain wolf was 6 years old and had four previous litters. The loss of any breeding adult red wolf is a significant setback to recovery of this species.

“The loss of this mother wolf is yet another blow to the highly endangered red wolf,” said Red Wolf Coalition, Inc. executive director Kim Wheeler. “It’s a blow not just to that pack, but to the entire population. That mother’s remaining puppies are in danger now, and her future puppies will never be born. In a small population like this one, that’s a significant loss.”

Sierra Weaver, senior attorney for the Southern Environmental Law Center, said, “The US Fish and Wildlife Service is charged by federal law with protecting the red wolf, yet here it is authorizing the intentional and unnecessary killing of a breeding female. Unintentional gunshot has been the leading cause of death for red wolves in recent years, and now we’re adding legally sanctioned intentional gunshot to the problem. This is not the way to recover an endangered species.”

Because the red wolf is protected by the Endangered Species Act (ESA), it is unlawful for anyone to “take” (i.e., harass, harm, pursue, hunt, shoot, wound, kill, trap, capture, or collect, or attempt to engage in any such conduct) members of the species, except in limited circumstances. The USFWS is authorized to issue permits to take red wolves on private property after a property owner requests wolves be removed and the Service abandons efforts to capture them. The landowner in this case denied the US Fish and Wildlife Service access to the property to trap and remove the wolves. The extent of the effort by the landowner to trap the wolf before killing it is unknown.

Mike Senatore, vice president of conservation law for Defenders of Wildlife, said, “It is hard to imagine how the Fish and Wildlife Service could have abandoned efforts to capture a wolf it was never allowed to get close to. That’s what the regulations require and that’s what the landowner prevented the agency from doing. The Service should not have permitted a wolf to be killed in this circumstance.”

Tara Zuardo, wildlife attorney for the Animal Welfare Institute, said, “US Fish and Wildlife Service regulations are supposed to provide for the conservation of the species, but when wolves continue to die and the population continues to decline, that clearly isn’t working. The Service needs to re-examine its regulations and what it can do to put this species back on the road to recovery.”

In addition to demanding that the USFWS publicly address the killing of this mother and the survival of her puppies, the groups are also calling on the Service to seriously address the recovery of the species overall. While the red wolf has been on the ground in North Carolina since 1987 and subject to a successful adaptive management program since 1999, its management is suffering from an out-of-date recovery plan; such a plan is required by the ESA.

Ron Sutherland, lead biologist with Wildlands Network said, “The red wolf needs a science-based path to recovery, including better protections from being killed unnecessarily by humans. It also needs stronger leadership from both the US Fish and Wildlife Service and the NC Wildlife Resources Commission. Both agencies need to commit to funding the landowner outreach efforts that have been needed for decades to improve public tolerance for this highly endangered species. It is worth reminding people that there are fewer red wolves in the wild than there are giant pandas, snow leopards, or whooping cranes."

“It’s impossible to understand how the agency responsible for protecting endangered species could approve the killing of a breeding mother in denning season,” said Brett Hartl, endangered species policy director for the Center for Biological Diversity. “It’s a sad day for the U.S. Fish and Wildlife Service.”

North Carolina is home to the only wild population of red wolves. Red wolves bred in captivity were reintroduced on a North Carolina peninsula within their native range in the late 1980s after red wolves were declared extinct in the wild. Once common throughout the Southeast, intensive predator control programs and loss of habitat eliminated wild red wolf populations.

About Wildlands Network
Wildlands Network is a conservation group committed to reconnecting nature in North America. We also advocate for the recovery of top carnivores to native ecosystems, due to the strong scientific evidence that exists for the crucial role of wolves, cougar, and other keystone species in regulating ecosystem function and maintaining biodiversity. Read more at www.wildlandsnetwork.org.

Note to Editors:
Photographs of red wolves in North Carolina are available for use with appropriate photo credit from the US Fish & Wildlife Service at http://www.fws.gov/redwolf/.